On a small beach between towering rocks around the corner from Cabo San Lucas in Baja, Mexico, I set up, shaded and alone except for an occasional beach walker and the skimming pelicans. A 20″ x 24″ proceeded, not bad, I thought, considering the wind and the blown sand. Leaving my easel (I call it my “office” in places like this), I joined our friends on their grander beach, discussed lunch, had a Coke, then returned to the office. 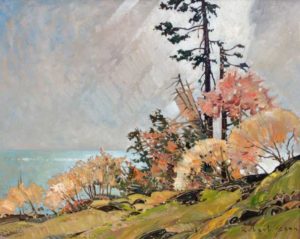 The painting was gone. It might have been whipped away by a gust, I thought, but a search higher up against the rocks proved nothing. As I was some distance from the water’s edge, it seemed unlikely to have floated up and away like a parasailer and was now somewhere over the Sea of Cortez. It had to have been stolen.

Funnily, though, the thieves overlooked the Toshiba laptop that had been under my folding stool. Were these perhaps high-end bandits, ones with some taste, like the nipper of the Mona Lisa, or were they just local riff-raff who might sign the work and make a quick peso in the local market?

I began to think my painting was the best thing I’d ever done, unrepeatable, irreplaceable. The more I thought about it, the more I boiled. Unlike the fish that got away, the art we make is part of us, part of our very body, and unless we willingly sell or give it, losing it like that is a supreme insult. 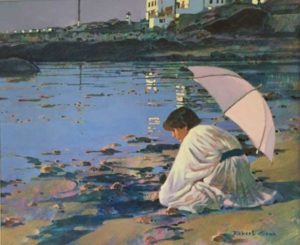 Then I began to think otherwise. Wasn’t this just like any other painting I had never properly painted? Wasn’t it just an exercise, its own reward, a faltering, inadequate plod toward improvement and nothing worth fussing about? I had thought to run an ad — “Painting lost — reward offered,” but I cancelled my thought. No, my painting had floated off into the great art diaspora where they all ultimately go. Or maybe it was now an angel in painting heaven where sins are forgiven, where human effort lives on in anonymous eternity, blessed with being neither seen nor juried.

I thought again. My little moment of ecstasy on a private beach was something I might secretly cherish as from the fruit of my youth, better than reality, passionate, brilliant. In fact, for one tiny moment I was a major performer in Western Culture, a regular Lothario of the brush. I’m sticking to that. 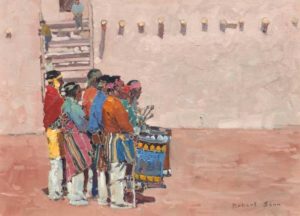 Esoterica: When all is only exercise and experiment, where questions give more delight than answers, and results are the lesser of process, we are given a special kind of energy. It’s shifty sand, though. Joy can be stolen because an artist has to put enough technique under the belt to be simply confident. To see a painting that never was, as it is to hear a tree falling in a forest, witness is during, not after. What happens after is really someone else’s business. And one mustn’t be fooled, as I almost was, that it was some of my business where they all end up. 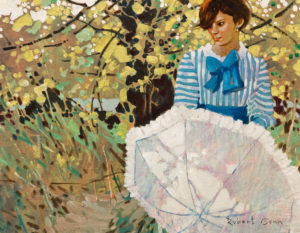 This letter was originally published as “Painting lost, reward offered” on January 29, 2008.

“We live our short spans in the vortex of a miracle, and while we may not be the center of that vortex, it is magic to be anywhere in there.” (Robert Genn)