You know about the concept of “pencilling-in” projects or appointments in your day-books or organizers. It’s a loose commitment to plan toward something before you formally ink it in and go for it.

This method is an excellent way to sort out priorities. For one thing it sends the plan or the idea to the subconscious so that it can be mulled over, examined and fine tuned. You can say anything if it’s far enough ahead. If a painting idea comes to mind I pencil it in, giving a sense of schedule and timing which seems often to miraculously bring it about. If it does not happen it was not meant to be. 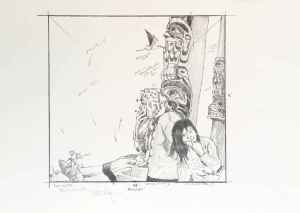 Last spring I read several books about Alexander Mackenzie and his voyage of discovery in 1789 down what is now the Mackenzie River in Canada’s Northland. I decided I wanted to do the same on my own terms. I wanted to see and paint the area as he had seen it — from the river — during the summer months — over a distance of more than a thousand miles from Northern Alberta to Tuktoyaktuk. This would require a special boat and a fair degree of planning. I pencilled it in.

As of today the special boat has been custom built and tested in local rivers and travel companions have been found. I have no reason to think that the voyage will not take place. It’s in ink.

Emily has also been invited; she will undoubtedly be the first Airedale down the Mackenzie. I’ll let you know how this dream pans out.

“Lay plans as if we were to be immortal.” (William James)