You are at:Home»Letters»Physical encounter
By sara genn February 15, 2019 Letters

Robert Ryman was a 22-year-old aspiring jazz musician who moved to New York City in 1953 and took a day job as a vacation-relief security guard at the Museum of Modern Art. There, he encountered the newly acquired Number 10, 1950 by Mark Rothko, part of the museum’s collecting spree of abstract expressionist paintings. 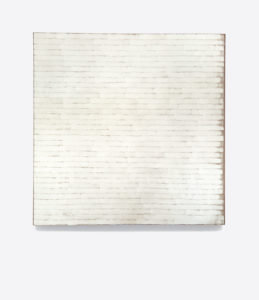 “His work wasn’t like a picture — like the usual pictures I had seen. That was a revelation,” said Robert. Growing up almost never seeing a painting, he may have felt that Number 10 was, instead of an illusion or reference to something else, an unapologetic, physical entity all on its own. Robert began using this condition — the qualities of wonder and delight, including Rothko’s physical approach of assessing everything in the museum and beyond — to look for a painting’s capacity to assert itself independently upon its surroundings and itself, just as it was. At the time, this “nakedness” came across as radical and enlightening.

In 1955, after two years at the museum, Robert bought some art supplies and began experimenting in his East 60th Street apartment. “I thought I would try and see what would happen,” he said. “I wanted to see what the paint would do, how the brushes would work.” He began exploring the idea of superseding any reference to sources outside the painting object — an “abstraction,” a term he disliked, but abstracted from nothing. His goal was to understand painting in terms of its materials and behaviour — treating it as an object. The deep edges, side drips, and the visible staples of Number 10 inspired Robert to begin. “It was so open.”

Robert would experiment with every kind of fastener and, for a time, hung his canvases perpendicular to the wall with metal struts. He eschewed colour in favour of the reflective and noiseless qualities of white, working in it almost exclusively for six decades. When he was 36, his first solo show kicked off with his being lumped in with the Minimalists and Conceptual artists. He said that it was never his intention to make white paintings. “The white is just a means of exposing other elements. White enables other things to become visible.” In 1992, Robert’s own retrospective was mounted at the Museum of Modern Art.

Esoterica: Robert Ryman was born in Nashville, the son of an insurance salesman, and a teacher and amateur pianist. He studied to be a teacher and served in the army reserve corps, where he played in a reserve band during the Korean War. Once in New York, Robert continued working at the Museum of Modern Art for seven years, while building his own art practice. Unlike the many artists whose work follows a trajectory arc of discovery and progress, Robert happened upon his calling and process at the moment he discovered his first painting. On February 8, 2019, Robert Ryman died at home in Greenwich Village. He was 88. 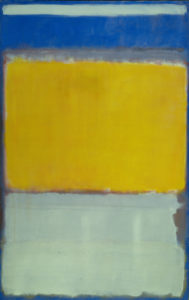 “I don’t like this word abstract… but I use it because people… have an idea what I’m talking about.” (Robert Ryman)

“There is never any question of what to paint, only how to paint.” (Robert Ryman)