“Every time I paint a portrait I lose a friend,” said John Singer Sargent. He may have been joking — his portraits combined a reasonable likeness with an elegance which often made sitters more aristocratic looking than they may have deserved.

As well as likeness there’s the desired psychological depth that comes with an understanding of the subject. The tools of the sitter’s trade — the objects of passion, are a good place to start. These paraphernalia, whether included in the painting or not, give a clue to personality and have an effect on how the subject might be handled. It’s useful to tell the commissioner that you prefer to give some thought to what might be done — and later present them with your concepts in rough form. I make them rough, rough, roughs so it’s possible to change my mind a bit. Ideally I have several concepts — at least one of them non-conservative. Generally this approach is respected and makes for more fun and potential quality. Often customers go for a concept that’s different from what they originally had in mind.

While it’s a bit of a catering game I love the challenge. It’s one area of fine art where the greyhounds are separated from the griffons. Recently I did a family group portrait of three teenagers. First I photographed them on location — part of my process, in this case a beach. I sorted my reference, stewed about my alternates, prepared three pencil roughs of differing sizes and formats, faxed them with prices, got phone approval for the one I most wanted to do, and started work within minutes. One by one I had the kids into my studio and labored to get them right and fresh at the same time. After a week or so it was finished. I decided to deliver. The parents were excited when I drew the framed 30″ x 34″ out of a big box and set it under a light. They were silent. They moved around a bit. Eventually, the father, a high priced lawyer noted for his courtroom smarts, turned to me, smiled and said “Whose kids are those?” 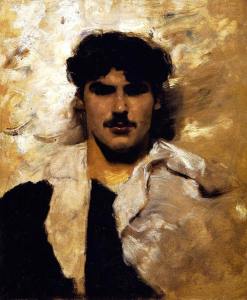 “Head of a Male Model” 1878
by John Singer Sargent

PS: “A portrait is a picture in which there is just a tiny little something not quite right about the mouth.” (John Singer Sargent)

Esoterica: “Madame X,” painted in 1884, featured Madame Pierre Gautreau, an American from New Orleans who married French banker Pierre Gautreau. Her gown’s right shoulder strap was originally slipped. This provocative dress shocked the audience at the Paris Salon. Sargent fixed it. He eventually sold the portrait to the Metropolitan Museum of Art, to whose director he wrote in 1916: “I suppose it’s the best thing I’ve done.”

The following are selected correspondence relating to this letter. If you find value in any of this please feel free to copy to a friend or fellow artist. We have no other motivation than to give creative people an opportunity to share ideas and possibly broaden their capabilities. Thank you for writing.

Books on portraiture
by Carol Hogan

Are there any good books (or sites) out there on portraiture? I am specifically interested in technique.

(RG note) There’s an excellent place to start at the Society of American Portrait Painters “Signature” site at http://www.portraitsociety.org/ Here’s where you will see some exceptionally good work. Basic books on technique are produced by Northlight and others. You can also go to our Books on Artists’ Shelves for recommended books. Artists do well when they get an idea of the direction they wish to go in and then try to find professionals who do it well. There’s nothing better than studying the work of people who know what they are (were) doing.

Your letter arrived today in a cloud of co-incidence. A week ago I was browsing the bargain section of Chapters Book Store, as I do occasionally, for art books on sale and was delighted to find one of substance (128 pages) on John Singer Sargent containing a lot of good colour pages of his work. And, it was on sale for $19.99 so I bought it immediately (along with 4 other books). When I got home I went through it thoroughly, examining each painting in detail. The next night, I went through it again in more detail. The following Wednesday, I took it to show-and-tell lunch with my painting buddies (Dick Morris is a great Sargent fan) and they were very excited by it. So much so that Dick was going directly to Chapters after lunch to get his own copy.

Imagine my surprise this morning when, my book still sitting on my right side desk, I read your letter about Sargent. I grabbed the book and looked up the painting of “Madame X” on page 49 and the strap was corrected. I then went to the unfinished version on page 12 and the strap was not corrected. At this point I experienced an epiphany when I noted that there was actually a fair amount of text in the book. There are always new things to learn.

To live in the world means moving, activity, dancing. Our life is a perpetual dance. Round the center, a perpetual encircling of the unseen unique one, we are — like the circle — indebted for our being to this unique one.

I saw a picture on my mom’s refrigerator door of a child at our church. The little boy was strikingly beautiful. I asked to borrow it. The child was dressed as a cowboy with an oversized hat, with his arm around a wagon wheel. I just wanted the face and so drew him in a snow outfit pulling his beanie off. I showed it to my art teacher who pointed out some anatomical areas to work on and then completed it. She liked it, didn’t mention resemblance but I was concerned about it. I hadn’t seen the little boy in some time and finally ran into him in church and said to myself, “My God, who is that in my picture.” (The parents did give me an unconditional release to use the final image so maybe it isn’t too unlike him.)

(RG note) Generic children are relatively easy when compared to the job of satisfying parents. Children under two have defied the best artists. Ask for a delay in proceedings.

Portraits of children are very hard because their features are changing pretty quickly. One day they look like mom, then you see that the father’s forehead or nose is beginning to appear. I find it really helps to also know the parents. One time I was painting a portrait of a young girl, I didn’t know, from a photo. I kept feeling that I was not getting a likeness. The girl had the pudgy roundness of a prepubescent and was much bigger than her very thin mom. Then suddenly I saw her mother’s jaw line in the work and I knew I was on the right track. Once I could see her mother in the image the work went much more smoothly. I insist on photos from three different angles and meeting the subject at least once to do some sketches. Same goes for dogs and cats, birds and bunnies. I’m going to paint a portrait of my father from sketches I recently did. I’m wondering how hard it will be to be objective about it?

(RG note) Here’s a tip for painting fidgety children direct from life. Get around behind their TV set and paint them as they watch the tube. It keeps them raptly occupied and after a while they forget what you’re up to.

Who is that on my horse?
by Gerry

I was commissioned to paint a client’s favorite horse. When I finished it my patron requested a larger painting with him atop his favorite steed. Photos were taken, including the additional request of including his estate in the background. When I presented the painting to him he said, “I appear much too fat and also too short.”

“The mind is essentially a survival machine. Attack and defense against other minds, gathering, storing, and analyzing information — this is what it is good at, but it is not at all creative. All true artists, whether they know it or not, create from a place of no-mind, from inner stillness. The mind then gives form to the creative impulse or insight. Even the great scientists have reported that their creative break-throughs came at a time of mental quietude. The surprising result of a nation-wide inquiry among America’s most eminent mathematicians, including Einstein, to find out their working methods, was that thinking plays only a subordinate part in the brief, decisive phase of the creative act itself.” So I would say that the simple reason why the majority of scientists are NOT creative is not because they don’t know how to think but because they don’t know how to stop thinking!” (Eckhart Tolle — from The Power of Now)

Sites of interest and value for creative people:

2
Notes and sketches from Julie Rodrigues’ visit to Spain this summer.

(RG note) Stephen and I will be doing a two-week workshop at Painter’s Lodge on Vancouver Island, BC, Canada. It’s sponsored by International Artist Magazine — the dates are September 24 to October 8, 2001. This will be my first major workshop in several years. If you would like information on what we’re going to do in this spectacular location please go to the Workshop Calendar. If you wish I can send you a brochure by regular mail. This brochure also contains material on workshops with Charles Reid, Tom Lynch, Alvaro Castagnet, Urania Tarbet, David Taylor, Margaret Evans, Robert Wade, Greg Allen, and Tony Smibert.

You may be interested to know that artists from 75 countries have visited these sites since August 1, 2000.

That includes Randy from somewhere who wrote that he needed a grant and a residency. “This,” he said “would give me a place to live and some money. Also, I would be willing to give paintings in exchange for food and dental work.”