You are at:Home»Letters»Purity
By ShawnA April 26, 2016 Letters 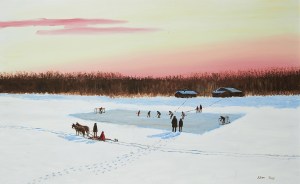 I’m in the easel-station of Alexander Mackenzie trying to get the most out of a simple palette. It’s not out of privation — we have on board virtually every pigment that one manufacturer makes. I’m consciously trying to pull paintings together with body color of Jenkins Green and Burnt Sienna. I’m mostly glazing with Quinacridone Gold and Phthalo Blue. There’s none of what psychologists call “analysis paralysis” here. Both Sara and I have noted they’re flowing like hot-cross buns.

The predominant shifts are mainly determined by the time of day, the interaction of the sky and the water, the mother-color of the dominant elements. Over the days of this journey a kind of energetic serenity has set in. Something happens with the mixture of space and time. I feel a sense of story. Others have told me you can feel it in your brush, and I do now. A family of mergansers swims close by — the young are almost ready to fly south. Perhaps you have felt it too — it has something to do with purity. 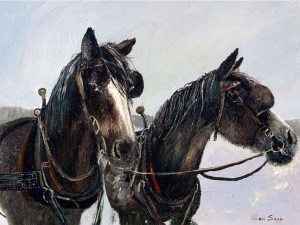 PS: “I can’t tell a story in the white man’s language, so I say what I want to say with my paintings.” (Allen Sapp)

Esoterica: In Cree philosophy, of which Allen is a proponent, they often refer to their god as “The Owner.” This spirit is the source of the land, its fruits and all its beings. The job of humans, apart from the requirement of getting along with each other, is to honor and respect his efforts. Here, in this remote corner of the owner’s garden there’s not a plastic bag or a tin can. I have a distinct feeling of guilt when I release the last of my paint-water into the pristine stream.

This letter was originally published as “Purity” on August 29, 2000.  Allen Sapp passed away on December 28, 2015 at the age of 87 in North Battleford, Saskatchewan. 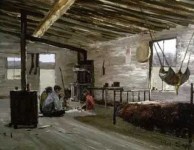 “Inside the House”
oil painting by Allen Sapp

“All that is necessary to paint well is to be sincere.” (Maurice Denis)