You are at:Home»Letters»Relationships
By ShawnA September 18, 2001 Letters

A non-artistic friend of mine is successful in pretty well all areas of life — his star shines everywhere and everyone who knows him is enriched. Yesterday, when we were in the car, I quizzed him on his secret of success. “I’m a nice guy,” he told me. He was embarrassed that I would ask. He’s not particularly verbal, but he laughs a lot. His cellphone is always ringing. His conversations are short, kindly, full of sincerity. He’s an expert at win/win. Later, quietly, he said to me: “Life is relationships.” 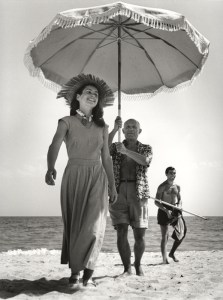 Thinking about art and artists, I was coming to a similar conclusion. Next to the quality of our work it’s our relationships that give us a purchase on the world. Safe confederates make projects doable. In order to grow and prosper we need folks around us we can work with and love. As creative people it’s easy to get wrapped up in our own hubris. I think it’s more or less a habit. Dealers and agents, for example, deserve loyalty and trust. Many of them are winnable as friends. Toxic and neurotic practitioners are to be avoided — there are plenty of nice guys and girls in the art universe. Artists such as Picasso, to mention just one, had an intuitive understanding of this. While he had many dealers, the contrasting and introverted D. H. Khanweiler protected Picasso for decades, allowing the prolific artist to be available and rare at the same time. The artist had to win the respect of the dealer. They were co-agents of his success — they might as well have been joined at the hip.

With regard to dealers I’ve found it difficult to really let some of them go. My solution has not been to cut problematical ones off. I just like to feature the outstandingly nice ones. Some days, some of them are so darned nice I feel I might be painting just for friendship.

PS: “No man is an island, entire of itself; every man is a piece of the continent, a part of the main.” (John Donne)

PPS: “Artists who live and work with spiritual values cannot and should not remain indifferent to a conflict in which the highest values of humanity and civilization are at stake.” (Pablo Picasso)

Esoterica: Francoise Gilot recalled that Picasso would ask her to play-act how a meeting with a dealer might be conducted — with all the likely turns of the conversation rehearsed and revised. Picasso’s goal was always higher and higher prices. Kahnweiler, incidentally, paid cash and generally tripled what he paid.

Odd to see, by implication, that you would suggest that Picasso was a nice guy. He was anything but. He was an exemplary conjunction of a showman and a con man. Talented, yes, but totally out for himself. His ego knew no bounds and he spoiled the lives of his wives and most of his children. Kahnweiler was his co-rat.

(RG note) The other thing I like about Picasso is that he is practically always graphically sound.

Picasso not calculating
by Joanne Stanley

Something that is mentioned in Life With Picasso by his ex, Francoise Gilot, is the idea that he generally didn’t plan anything. ‘In his relations with his dealers,’ she says, ‘Pablo played a shrewd psychological game based on the idea, as he put it, that “the best calculation is the absence of calculation.” By this we can imply that Picasso was used to thinking on his feet and improvising as he went along. Perhaps it’s this capricious nature that led to his greatly varied and playful art.

Picasso liked to surround himself with articulate poets, artists and writers. He counted Matisse, Braque, Apollinaire, Max Jacob, Paul Eluard, and many others as friends. This is one of the reasons he was able to talk eloquently about his art — a quality that helped Picasso define and become the spokesman for movements such as cubism. As well as art he helped create a language of painting. Picasso was an extremely adaptable, supple person, always talking perceptively about his painting because of his intimacy with those who had been able to discover the right words. Also, like many intense people, Picasso’s friendships had no value to him unless they were being actively demonstrated.

Khanweiler was the protective character in the film Surviving Picasso. As far as biographies go, I’ve only read Gilot’s memoir, and as it was long ago the details escape me. Kahnweiler, in the film, was portrayed as a bit of a doormat, both noble and pathetic as he played Picasso’s ‘game’ for him to the hilt. It wasn’t as good a film as Pollock. Both films played up the tormented artist stereotype.

I really needed a note like this one after the sadness that we all have felt this past week. It is so good to see that nice guys still finish first!

A bump in the yellow brick road
by Sally

A show committee was put in place and six ladies did an absolutely terrific job in organizing it. They even put together a kit so the next show will go smoothly because every time (which has been three which I have had information on, it has been haywire) a new committee is put together and there is no map to follow… it goes like this… you volunteered — you figure it out. Now the problem is this… The show is in a mall. It apparently is a very DEAD mall with vacancies and low-end stores. It’s an easel show meaning all pictures will be on easels then wired there so they cannot be stolen (as if they will prevent it). This show must be manned. There are many slots which members must sit and take care of the show. It is mandatory that to submit you must sign up to work the show and even if your painting is rejected you must still sit for it. My gut says don’t do it… but here comes the guilt: These ladies put a lot into this and you did mention that relationships are important. As a responsible club member — should I? What do you think? Does occupying one’s time with this stuff enhance one’s journey or does it hold you back? On my yellow brick road of this world I love to give, but I don’t think that this is the most useful way.

(RG note) Do this one because you said you would or because you love the brotherhood and sisterhood. Many mall shows are demeaning and ineffective — this sounds like it’s going to be one of them. The path to Oz is for artists who go to their rooms. You’ve already got the ruby slippers.

I am a member of Lone Star Pastel Society, Amarillo Fine Arts Association and Tri-state Artists Association. The past week I spent to and fro between the television and my studio. It was difficult to get “in the right brain mode” and stay there for any period of time.

Not much of an artist
by Louise Grey

“If you hear a voice within you saying, ‘You are not a painter,’ then by all means paint… and that voice will be silenced.” (Vincent Van Gogh) I recently had an email from a friend who is a writer and she was sharing a story about Daniel Quinn, author of Ishmael, and other books. It took him eight tries and twelve years to write this book, and publishers kept telling him that what he was trying to do was impossible. Here’s a quote from his website: “I think it’s fair to say the role of the artist is to attempt the impossible – to paint what cannot be painted, to sculpt what cannot sculpted, write what cannot be written. In fact, any artist who shuns the impossible and settles for what is easily accomplished is not much of an artist.”

Make life a work of art
by K. Devanney

It’s been awhile since I have painted anything. When I was very young personal struggles propelled me to write poetry — something compelled me to write. Now, after years of dormancy without painting or creative writing, I find there is still a flame of creativity in me somewhere. I dug out my brushes, paper and watercolor palette and am going off today to purchase some fresh new tubes of paint and a couple of good brushes. I have also decided to try something new. I want my life to become a work of art.

My wife Eileen and I just got home to New York a few nights ago (Sept 17) from a 12-day trip to Berlin. There was an unbelievable outpouring of support and sympathy from the Germans after the World Trade Center and Pentagon attacks. It’s a changed world, but the US seems to have a lot of friends in Europe and around the world.

Women of Afghanistan
by Denise

If the people of the free world would like another reason to selectively thump the Taliban leadership, they might give some thought to the terrorist tactics against women within Afghanistan. Under this rigid regime women’s rights and freedoms have been taken away. Bloody atrocities against women are being committed daily. Women who might have been artists, writers, and any other thing that women aspire to in the west or in moderate Muslim states are denied the opportunities. They must hide behind blackened windows so that men may not see them. For them, education and nutrition are at a standstill. A girl can be killed if her hymen is not intact at marriage.

(RG note) You can read and understand more about this by going to the official site of the Revolutionary Association of the Women of Afghanistan http://www.rawa.org

Throughout time there has been great suffering. May this unspeakable addition lead us somehow to positive change for all of humanity. May we understand each other’s suffering and not be ignorant of our oneness. I pray for peace.