You are at:Home»Letters»Sham
By ShawnA February 9, 2016 Letters

When I was at the Los Angeles Art Center my friend Tom Bizzini used to say, “Fine art is a sham.” It was a popular sentiment around that workmanlike, survival-of-the-fittest, quality-counts school. In those days it seemed that there were lots of artists who were “putting in a nickel and trying to get a dollar tune.” Same as today. 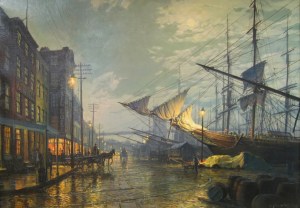 Recently, I saw some of John Stobart’s work in a gallery and was reminded once again just how good he is. John is one of the world’s top marine painters — his work sells in the hundreds of thousands of dollars. He grew up in Derbyshire, England, went to the Derby College of Arts and Crafts, emigrated to Canada and then to the USA.

John’s historical works are loaded with accurate research on vessels long since gone to the bottom — as well as re-visualized buildings and locations. Looking at his paintings, they make me feel like lowering my noble little clinkerbuilt and rowing around in them. To actual happenings in marine lore, he brings an understanding of drawing and perspective, painting bravura, luminous shadows, reflected light, unusual lighting conditions — moonlight, fog, against-the-light and atmospheric interference. Further, he gets details (such as rigging) right. This is a tough order. John knows how to rig a man-of-war, a Bluenose or a paddle wheeler. Practically everyone who has sailed on any sort of boat will look at a boat painting and find something wrong with it. I overheard one sidewalk expert say, “That block has four holes, it should have five.” The guy was wrong, it needed to be a four-holer, John got it right. 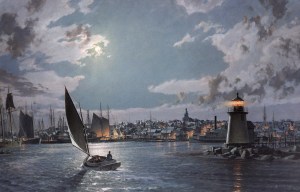 “Nantucket: The Island Port by Moonlight at the Turn of the Century” oil painting by John Stobart

One time John was on our 112-foot vintage tug “Ivanhoe” together with John Horton, another brilliant marine painter. The two studied the giant oak knees that spanned between the ribs and the deck. They looked closely at our scuppers, gunwales, our brass and our carved detail. There was a glint in their eyes — that sobering look that you see when passion is combined with knowledge. New information gives new understanding and new understanding gives new inspiration. This is no sham. 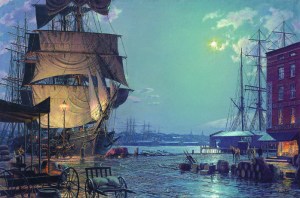 PS: “Painting from life should never be lost. It should still be taught, respected and practiced. My prayer is that the ancient art of true painting will not disappear, for if it does so much of human nature will perish too.” (John Stobart)

Esoterica: John’s is the classic story of character together with rigorous training at the Derby School, the Royal Academy in London, England, and then emigration to countries (Canada and the USA) that appreciated his skills. Success was more or less instantaneous because quality was there. “I determined I would never call one of my galleries and ask for money,” he says. “I wanted to elevate myself above the status of a starving artist.”

This letter was originally published as “Sham” on January 30, 2004.

Share the Love.
If you find these letters beneficial, please share and encourage your friends to subscribe. The Painter’s Keys is published primarily by a team of volunteers, with a goal to reach as many creative people as possible. Thanks for your friendship. Subscribe here!

“Friendship is never anything but sharing.” (Elie Wiesel)