You are at:Home»Letters»Signature move
By ShawnA January 8, 2016 Letters

Patty Oates from California wrote, “Could you comment on the red dots your father used in so many of his paintings? I’ve never seen a word about this practice, which is so effective.” 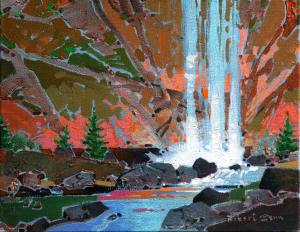 Thanks, Patty. You’re referring to the personal technique of Dad’s called “counterpoint and colour surprise.” Think of it as a “signature move” — one that bumps up vibrations so the work dazzles and identifies it as uniquely his. While the dots are especially Dad’s, you can find your own signature move by first understanding the mechanics of his.

John Rahn, music theorist, composer, bassoonist, and Professor of Music at the University of Washington School of Music, Seattle, wrote, “It is hard to write a beautiful song. It is harder to write several individually beautiful songs that, when sung simultaneously, sound as a more beautiful polyphonic whole. The internal structures that create each of the voices separately must contribute to the emergent structure of the polyphony, which in turn must reinforce and comment on the structures of the individual voices. The way that is accomplished in detail is… ‘counterpoint.’” 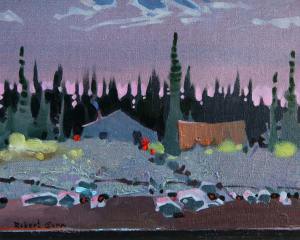 “On a Tributary of the MacKenzie near Ft Providence”
acrylic on canvas, 10 x 12 inches
by Robert Genn

In music, counterpoint is the relationship between melodic voices, which are connected harmonically but remain independent in rhythm and contour. When layered, they’re called “polyphony.” For example, if one melody is reaching upwards and with complexity, a simultaneous counterpoint may be a related voice that meanders spaciously underneath or in between. You need only listen to J.S. Bach’s Goldberg Variations to know what I’m talking about.

At your easel, identify the painting’s “mother colour” and create a colour surprise with a complementary. Now find an unexpected way of adding it — with a new texture or brush, perhaps. I once knew an artist who used a spray bottle full of runny metallics. Let your counterpoint dance in the spaces calling for it. In the case of Dad’s dots, he favoured a Number 5 Round Sable — a delicate response to established passages, like gradated skies for example, that call for a large Fan brush, a Flat or Bright. Technically, counterpoint and colour surprise add character, pattern and bounce to composition. They direct the eye and signal mystery peeking from the shadows. 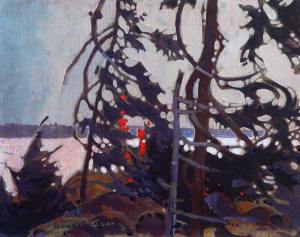 “Just a Touch on a Sombre Day, Lake of the Woods”
acrylic on canvas, 11 x 14 inches
by Robert Genn

PS: “In colour composition red is the most reliable colour surprise. Red is charged with emotion and promise. Red speaks for heroism and bravery, honesty and patriotism. Red is also the red badge of courage, redcoats, the thin red line, red sails in the sunset, and a jolly red nose…. Red means anger, fire, storms of the heart, love and war. Even women can be scarlet. More than any other colour, red is loaded for action.” (Robert Genn) 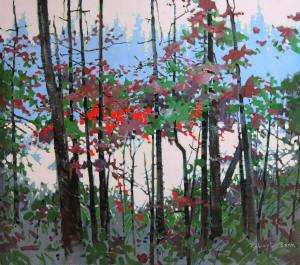 Esoterica: I’ve often noticed gallery-goers cruising Dad’s paintings for those “little red dots” — as if searching for a signal of his presence. Once found, there’s a moment of recognition and delight — as if Dad were there personally, in code. I’ve come to understand these dots as a “handle” with which one might hold onto deeper cues about connection and the universal values of nature — her energy, emotion, promise, beauty. The dots, in their excitement, entice all of us to play in the polyphony.