You are at:Home»Letters»The Value of Silhouette
By clearmarble April 15, 2014 Letters
Dear Artist, Have you ever noticed how a silhouette can tell you such a lot by saying less? That’s because the human mind is capable of filling in needed information to complete a picture or to recognize a familiar image. 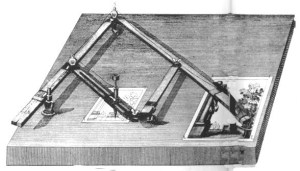 The first pantograph was constructed in 1603 by Christoph Scheiner, who used the device to copy and scale diagrams.

Silhouettes were originally profile portraits, generally in black. In the early days they were often taken from a shadow cast by a candle onto a sheet of paper. Common during the 18th and 19th centuries, silhouettes were most frequently done on black paper as freehand cutouts by clever people with sharp little pairs of scissors, who then pasted the cutouts on a white board. The “Physionotrace,” invented in France, was an early mechanical device for tracing a profile. With the sitter’s head more or less locked with a headrest, the artist put his eye up to a peep-hole and traced away with a pantograph-like device that could either enlarge or reduce the image. For the visual artist there’s more to silhouette than meets the eye. From a distance of several hundred yards it is possible to distinguish friends and safely call them by name. This tells us something about “likeness.” Near or far from a subject, if you half-close your eyes when looking at a face, you will quickly see the outline as an oval, a rectangle, a rumpled mess, etc. The portrait painter who looks too closely is liable to miss this big picture. 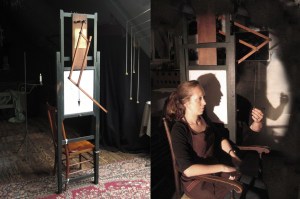 Silhouettes work as art because of the absence of internal clutter. Less is more. Furthermore, this facile understanding of form, whether the human head or a boat at anchor against a sunset, is a supreme creative device. Photographic memory aside, many artists find they can “burn in” fairly complex silhouettes. This is an acquired skill that requires a bit of a trick. You need to stare around the subject, noting unique edges and peculiarities, and then let your vision go somewhat flat — even blurry — as if observing a larger scene with no particular details. With patience you can teach yourself to grab quite a bit of info and stash it somewhere in your mind’s visual archive. Human profiles, particularly, provide satisfying exercises in retention and can be made to last for many years. The invention of the camera by Nicephore Niepce, in 1826, was the beginning of an era when more than enough information was supplied. Studio Daguerreotype portraits, tintypes, and “cartes de visites” dazzled with their accuracy and complexity. Silhouettes faded from popularity. Relatively speaking, it doesn’t take a lot of imagination to view many photographs. In a way this is unfortunate. Are we missing something? Best regards, Robert PS: “In a dark time, the eye begins to see.” (Theodore Roethke) Esoterica: In painting, the silhouette is a method of avoiding distracting detail. As foreground framing, a silhouette is a device to build pictorial depth. It can also provide eye-control and center-of-interest activation. Furthermore, foreground or background, soft-focus silhouette cuts back on pictorial boredom and stasis. Soft-focus silhouetting adopts a camera technique to heighten reality or add magic. This letter was originally published as “Silhouette” on June 24, 2003.   [fbcomments url=”http://clicks.robertgenn.com/silhouette.php”]  Featured Workshop: Julie Snyder