When travelling, I’ve found it’s a good idea to call them “material” so as not to confuse them with finished paintings. At home, they’re laid out like so many fish on a dock. Some are even a bit rank. The first thing I do is pick out the ones that are nearly okay and put them to one side. These will be the first I finish off, sign and varnish. Those few give a kind of confidence to the whole effort. I’ve found it’s often among the next few — the ones requiring more thinking — that the better paintings will come about. Before I go on to talk about them I ought to mention that there are the last few — hopeless cases — where nothing much can ever be done. Their main fault is that they are already too overworked — so no amount of glazing or overpainting will fix them. In some of them it’s a matter of scale — the subject matter is too small for my chosen sketch size: 11 x 14 inches. I’ll save these as reference for possible larger works.

The hard cold fact is that many of these from the Mackenzie trip will have to be burned. This I do.

Now back to those middle ones. It’s like a mini juried show — and I’m the only juror. Having been tucked away for a while some appear relatively fresh when floundering on the floor. Every plein air effort gets the benefit of a variety of solutions with the juror’s studio eye. Elements are mentally taken out and put in. Skies are repainted. Things are punched in, toned down, brightened up. Complexity is added, reduced. Glazes and scumbles are planned. Works are moved, juxtaposed one to the other, some on the secondary easel, some forever floored. It’s fun. The only tools so far called into play are a match and a good cigar. 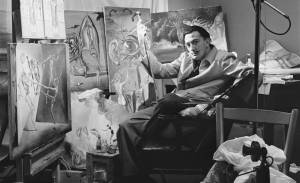 PS: “If it can be well enough dreamed; it can be easily enough done.” (Author unknown)

Esoterica: The “second opinion” is an accepted concept in the medical profession. I don’t believe in it for the art profession. The main job is to learn to be your own best critic. That way you get your stuff the way you want it. Stephen Vizinczey wrote ten commandments which apply to artists. The last two are: “Thou shalt paint to please thyself,” and “Thou shalt be hard to please.”

The following are selected correspondence relating to the above letter. If you find value in any of this please feel free to copy to a friend or fellow artist. We have no other motivation than to give creative people an opportunity to share ideas and possibly broaden their capabilities. Thank you for writing.

No problem
by A Reinhard, Coln, MICO, NYC

I never have these kinds of problems. When I start a painting, I finish it 90% of the time. The ones I don’t get to finish on my first attempt because of some unforseen interruption, I always finish in my second or third try because I knew what the theme was going to be from day one.

I find if I don’t get them right the first time — I’ll never get them right — ever. This hasn’t happened to me for some years. However they turn out is the way they were meant to be — and that’s okay with me. I’ve stopped being too judgemental and now they are all perfect.

The danger with stewing about paintings, dividing them into groups and actually chucking some is that you sometimes lose the spontaineity and the gestural quality that made it all work in the first place. As a teacher and juror I know that the three main problems that get art rejected all the time are overworking, overworking, and overworking. This overworking is often due to too much thinking. Thinking is generally, although not always, bad for you.

The process you mention has a parallel in filmmaking. Raw material or “footage” is generated first of all, often in quantity. But it is in “post production” where the work takes form. Through the contrivance of montage, editing, sound embellishment and other skills the work rises to a whole which is greater than its parts. Through this process the work becomes more sophisticated and controlled — at the same time, if he or she has influence on the process, it takes on the personality of the auteur. Casual motifs and gestures can either be kept in or left out. It is also at this time that artistic licence has a chance to flourish; further “second generation” risks are taken, and full realization occurs. In painting, a few splodges and spashes, as in film right out of the camera, do not necessarily make satisfactory art.

If a person has the good fortune to have a seasoned professional for a mentor, then a “second opinion” around the studio is invaluable. It’s my wife. 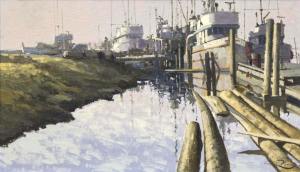 (RG note) An elderly friend, Geoffrey Rock, passed away last week. A master in oils, he was one of those delicate, dedicated painters who fretted and worried about every painting. Talking to his wife Joan over the last few days I was surprised to learn how much he depended on her to vet his paintings. He frequently asked her to come into the studio and pass an opinion. According to her she was sometimes a bit harsh, and there would be a bit of a dust-up, and Joan would leave. After a while Geoff would come sheepishly out and announce that she had been right and that he had fixed the problem. “It was love at first sight for Geoff and I,” she said about meeting in London during the war — “we have been inseparable ever since.”

You mentioned Stephen Vizinczey had written ten commandments for artists. What are they?

(RG note) They’re not actually for artists — they’re for writers. I transpose “write” to “paint” and they work magnificently with only a few backslides. I’ve dined out on these. Thanks again, Stephen.

I like the funny titles that you sometimes put to artist’s letters Robert, but one in the last was unintelligable to me: “The Moon and 6M.” Please explain.

(RG note) Somerset Maugham’s The Moon and Sixpence, was a play based loosely on the life of Gauguin. Emphasizing his poverty, it did a great deal to promote the Gauguin legend which arose shortly after his death. I was trying to put in a bit about artists at the other end of the economic scale. Sorry; a bit obtuse.

You may be interested to know that artists from 70 countries have visited these sites since March 30, 2000.

That includes Tania of Victoria, BC, who notes that a match has a double duty, and J C Brown of Huddersfield, England, who started thinking about a field sketch eight years ago and hasn’t done anything with it yet, and George of hotmail country who burned them all and felt fine about it.