You are at:Home»Letters»The story of yellow
By clearmarble January 31, 2014 Letters
Dear Artist, Traditionally, yellow has come from five main sources–mango, gamboge, orpiment, ochre and saffron. In the case of the Indian mango bush, the leaves were force-fed to a certain type of cow. At this point the cow’s bladder would produce a urine-dyestuff which could be harvested and exported in the name of Indian Yellow. 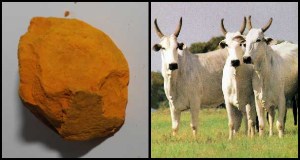 Who would believe that yellow paint might come from these critters?

Gamboge, a corruption of the word Cambodia, first came from that country. It’s an extract from the Garcinia hanburyi tree, which, when raw, forms into dirty brownish balls like earwax. When touched with water or other medium it becomes a brilliant yellow. Both gamboge and orpiment are full of arsenic. “There is no keeping company with orpiment,” warned Cennino Cennini, about 1390. Orpiment means “gold-like.” It fascinated Middle-Ages alchemists. Ochre is an iron-oxide mineral found on every continent, but notably in Turkey, southern France, and at Sienna in Tuscany. While less brilliant than most other yellows, ochre is perhaps the earliest artists’ colour and, to this day, one of the more useful. Among the yellows, saffron has the highest price tag. Used in both cookery and art, saffron comes from the delicately harvested pollen on the tiny stamens of a purple crocus. Originating probably in Kashmir, saffron culture spread to Morocco, then Spain, and in the 16th century to a short-lived industry in and around Saffron Walden in England. These days the pigment business is greatly synthetic. Colour-making represents the confluence of the art of chemistry and the chemistry of art. What we do with it is not too far removed from the day when some cave-dweller picked up a chunk of ochre and found that he could make his mark. “I have magic,” he or she must have thought. Best regards, Robert PS: “There are painters who transform the sun into a yellow spot, but there are others, who, thanks to their art and their intelligence, transform a yellow spot into the sun.” (Pablo Picasso) Esoterica: For a fascinating artist’s odyssey, see Colour: Travels Through the Paintbox, by Victoria Finlay, a passionate and brilliantly curious young woman. In one of her many colour-seeking adventures, she rickshaws out to the village of Monghyr, near Patna in Bihar State, India, to try to find out why the ancient cows died young. This letter was originally published as “Yellow” on April 29, 2003.   [fbcomments url=”http://clicks.robertgenn.com/story-yellow.php”]  Featured Workshop: Jack Richardson

Jack Richardson Workshops The next workshop is held in Barbados.   The Workshop Calendar provides up-to-date selected workshops and seminars arranged in chronological order.