One evening when I was turning out the lights and shutting down my studio, I glanced in the darkness in the direction of my easel and had an alarming thought. I realized that all over the world, all kinds of regular people might be doing something similar. Before going to bed they might be casting their eyes around their homes to see that everything was okay. Some of those eyes might catch for a moment on one of my paintings. There are a few out and about. 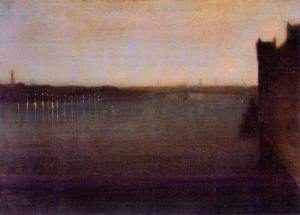 As I looked back into my studio, I realized that paintings ought to work in the almost-dark as well as in the full light of galleries or on home walls. Almost-dark is similar to what we do when we half-close our eyes. Areas of incongruity pop out, spindly and weak elements beg to be strengthened, woolliness is exposed as major-woolly. You notice funny things in the almost-dark — odd things, ghostly things, apparitions, things that look like something else. That evening I made a mental inventory of what needed to be dealt with in the morning.

I’ve been doing it ever since. For some reason I’m always able to remember my list. It kicks off the day. Sometimes the repairs are done before coffee. 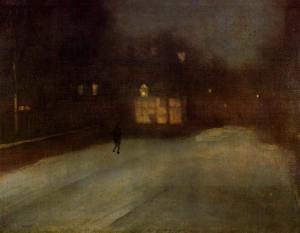 Of course there are other useful devices to shake the mind and see things anew. These include mirror viewing, taking outside (or inside), sideways glances, upside-down, through binoculars backwards, through a glass darkly, through a glass of scotch, through gels or colour filters, through screen-doors, scrims or lace curtains. Kahlil Gibran, speaking both practically and philosophically, said, “I have sharp and penetrating vision because I see through the mesh of a sieve.”

A secondary easel is the greatest stage for this sort of creative reassessment. The “Caritas” easel relieves the pressure and obligations of the work easel. Caritas comes from a Greek word meaning to cherish, appreciate and give special attention to. Paintings on the caritas easel, temporarily framed, gain or lose power. When brought to the almost-dark the effect is magnified. Art comes out at night. Some art sneaks away in anguish and embarrassment — unable to face its own weaknesses. Fortunately, some art dances confidently into the wee hours, hopefully in other people’s homes as well. 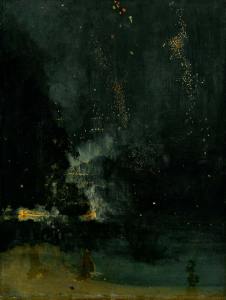 PS: “The mind stands in the way of the eye.” (Arthur Stern)

Esoterica: “An artist,” said James McNeill Whistler, “is not paid for his labor, but for his vision.” An altered state of seeing can help an artist better define that vision. Looking back doesn’t necessarily bring on a sense of contentment. It’s one of the pro-tools that creators need in order to better understand what it is they’re up to. The idea is to seek out and kill the banal and ordinary. The idea is to find and honour the central motif. The idea is to make your vision stronger. “An artist,” says Tom Lynch, “is paid for his vision, not his reporting.”

This letter was originally published as “The almost-dark test” on June 17, 2005.

“Vision is the art of seeing things invisible.” (Jonathan Swift)