You are at:Home»Letters»The birth of cool
By sara genn April 5, 2019 Letters

Another studio visitor asked me what had changed since moving from New York to California. “Your work looks like it belongs here,” she said. I’d heard this before, though much of the work had been first imagined before my migration only 15 months earlier. Wishing to downplay the apparent apropos, I diverted attention to the question of whether my eyesight was improving. Pointing towards the immaculately in-focus San Jacinto mountain range, I stated, “The air — the light — there seems to be very little atmosphere here.” “Yes!” she exclaimed, “everything is so crystalline, so articulated; the mountains, the boulders, the stars.” We were fans of the clarity. 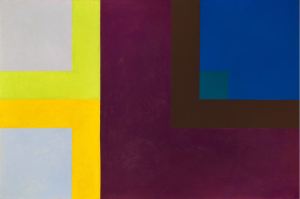 Artists who’ve spent time in the Pacific Northwest can attest to the desert’s antithesis: moody light and misty, inclement conditions that implore depth of field cloudscapes and totemic, receding, gradational islets — what we sky junkies affectionately call, “pea soup.” And in New York, artists respond to the atmospheric cacophony by soldiering through all its conditions, including the night’s, under halogens and LEDs. Now, here, my own paintings have emerged as abruptly sharper — made only in pure daylight — and as clean and neat as a California curb.

Coined in 1959 by Los Angeles Times art critic Jules Langsner, the term “Hard-Edge” was given to the work of painters reacting against the gestural and expressionist trends of the era; black, muddy globs that were the kings of New York and their raucous bebop brothers at the Blue Note. Soon, the term narrowed to the geometric abstractions that radicalized economy of form, surface clarity and a fullness and purity of colour. The movement, in opposition to Expressionism, also claimed California as its creative birthplace. 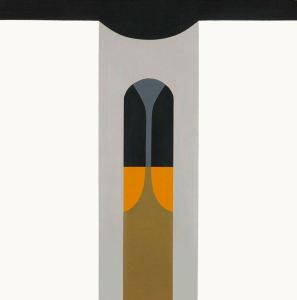 Esoterica: Until recently, I hadn’t connected my own explorations in technical colourfield work to the spirit and ethos of California Hard-Edge. Around here, its tenets seem to be laced into the tap water. In 1959, the movement’s inaugural exhibition at the Los Angeles County Museum Of Art, Four Abstract Classicists linked the paintings of four painters; lively interlocking geometrics and sensuous flats playfully striving for equilibrium, all while offering a kind of laid-back intimacy. Almost 50 years later in 2008, a new survey, Birth of the Cool: California Art, Design and Culture at Midcentury toured museums across the United States. “The cool did not try to change the world,” understated Ken Johnson for the New York Times. “Rather, it was an end in itself.” 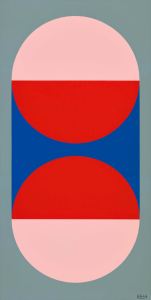 “Birth of the Cool was inspired in part by the formal parallels between modernist architecture and the West Coast Hard-Edge paintings of the 1950s. Just as the light-filled modernist house is open to the elements, with walls and ceilings more like planes floating in space than enclosures, Hard-Edge paintings of the period show an ambiguity between flatness and depth.” (Elizabeth Armstrong, Chief Curator of the Orange County Museum of Art, 2008) 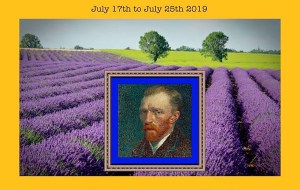