You are at:Home»Letters»The buddy system in art
By ShawnA March 8, 2016 Letters

If you’re going swimming, you’re better off if you swim with a friend. So goes the theory. Folks who get together and paint on Thursday mornings know what I’m talking about. There’s something to be said for collective consciousness, shared energy, or maybe just the joy of like-minded companionship. 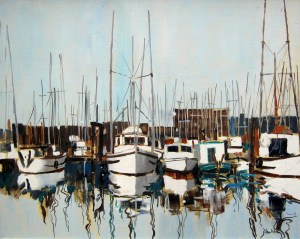 Here’s a buddy system for studio-introverts or home-workers. You need a telephone friend who is in the same business, some music and a clock. Squeeze out and get all your stuff in order. Phone your friend and propose a time-frame. Two or three hours are good, or it can be until your tray of Mozart runs out. Make an agreement not to stop until the appointed time. It’s fun to give an exact start, like a starting pistol. Bang. As you may have noticed from my previous letters, I’m a believer in fast and furious. It’s an automatic work-freshener and you’ll be amazed how much the two of you can get done when you keep on pushing. When the agreed period ends phone your buddy and compare notes. Not surprisingly, across the wires, there’s a feeling of cosmic connection. 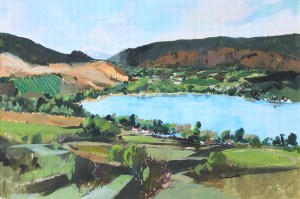 If you have a digital camera, you might now shoot, jpeg and email an exchange. In today’s world this minor miracle can happen in less than 60 seconds — even if you’re in Wakanacksak and your buddy is in Dover. If you’re into mutual critiquing, you can be each other’s best buddies. A small jpeg actually gives an advantage. Compositional problems pop out in ways that are not always available to the creator who’s sitting in front of his or her effort. Sometimes, what you thought was still unfinished, gets a surprising applause from across a puddle. Start collecting each other. Make regular dates.

My epiphany arrived when I realized that my art turned out best when I embraced it as an event. When you have a like-minded buddy, it’s easier to make it into a memorable one. 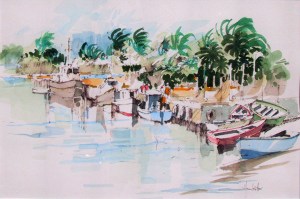 PS: “On Monhegan Island, Robert Henri and George Bellows had a contest to see who could make the largest number of oil sketches in one afternoon.” (Eunice Agar)

Esoterica: My best painting buddy has now passed away. His name was Jack Hambleton. He painted in watercolour, oil and acrylic. We had fun together. “Sit down and shut up,” he used to say. That was his way of telling me to pay attention to what I was doing, be more efficient, and to push against my self-imposed limitations. “Without him I would have given up.” (Renoir on Monet)

This letter was originally published as “The buddy system in art” on February 28, 2003.

“It’s easier to be creative if you’ve got other people to play with.” (John Cleese)