You are at:Home»Letters»The hut
By ShawnA December 22, 2017 Letters

At the foot of an apple orchard in the village of Great Missenden, Buckinghamshire stood a hut that for 36 years was off-limits to all but one person. 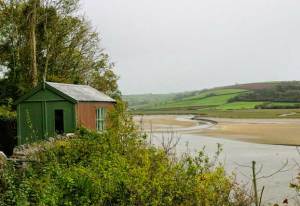 Nestled at the end of a lime-treed path, the hut paid homage to another, distant hut — a converted garage perched on a cliff edge overlooking the Taf Estuary in Laugharne, Wales. This is where Dylan Thomas spent the last four years of his life, writing, among others, Under Milk Wood, Do Not Go Gentle into That Good Night, Over Sir John’s Hill and Poem on His Birthday. He kept a desk and chair, pictures of his heroes Byron, Whitman, Auden and MacNeice, a pot of pencils and a bowl of boiled sweets. In a letter to his publishers, Thomas described his sanctuary as his “word-splashed hut.” 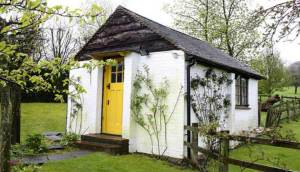 A few years after Thomas’s death in 1953 at age 39, Welsh-born novelist Roald Dahl, just two years younger than Thomas, travelled to see the hut in Laugharne. Struck with its perfection, Dahl returned to his new property in Great Missenden to build at the bottom of his orchard nearly the exact same hut. There, Dahl banned interlopers and polished a daily routine of walking with a thermos along the path from his house, crossing the threshold and settling into his mother’s hand-me-down wing-backed chair. He tucked his legs into a sleeping bag and propped his feet on a de-commissioned suitcase. With a cardboard tube balanced on his knees and a wooden board balanced on the tube, Dahl began by first sharpening six HB pencils. He wrote in longhand on a yellow legal pad — a filing cabinet and books close on one side, a wastepaper basket for rejected pages on the other. “Finally you get settled, you get into a sort of nest and get really comfortable, and then you’re away,” Dahl said of his “womb,” where he would write more than 34 books over 36 years until his death in 1990 at age 74. “A little hut, curtains drawn so I don’t see the squirrels up in the apple trees in the orchard. The light on, right away from the house, no vacuum cleaners, nothing.” 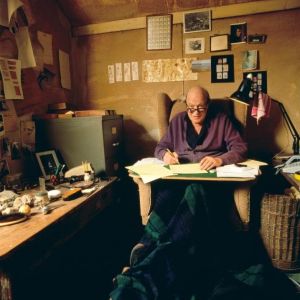 “Those who don’t believe in magic will never find it.” (Roald Dahl, from “The Minpins”)

PS: “Well, maybe it started that way. As a dream, but doesn’t everything? Those buildings. These lights. This whole city. Somebody had to dream about it first. And maybe that is what I did. I dreamed about coming here, but then I did it.” (Roald Dahl, James and the Giant Peach, written in the hut at Great Missenden, Buckinghamshire, England)

“To begin, at the beginning…” (Dylan Thomas, Under Milk Wood, partly written in the hut at Laugharne, Carmarthenshire, Wales)

Esoterica: Your own, word-splashed hut needn’t be perched on a cliff or tucked at the bottom of the garden. If there are gifts this season, consider offering a private promise to erect a sanctuary in a corner of your own, personal orchard. “Four and a half hours of my day — a quarter of my waking hours I am completely immersed in a dotty world of fantasy,” said Dahl of the lifetime of creativity he relished in his hut. “A person is a fool to become a writer. His only compensation is absolute freedom. He has no master except his own soul, and that, I am sure, is why he does it.”

Wishing you a peaceful holiday and a very happy and creative New Year from all of us at The Painter’s Keys.
Thank-you for your friendship.

“Never do anything by halves if you want to get away with it. Be outrageous. Go the whole hog.” (Roald Dahl, from “Matilda”) 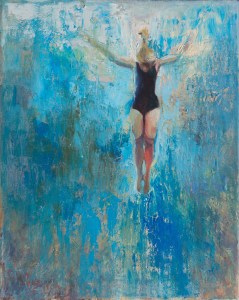 Come to Taos to paint, draw and write with a group of artists interested in deepening their vision and skills. Stay at the iconic Mabel Dodge Luhan House, a place where artists and writers have been gathering for nearly a century.

Artist and Instructor Julia Morgan will teach how to transform sketchbook pages with watercolor and drawing techniques that tell stories of vast and ever-changing skies, adobe dwellings nestled in cottonwood groves, red mesas along the horizon, the colored striations of cliffs, and the winding canyon carved by the Rio Grande.

All levels of art experience are welcome.