You are at:Home»Letters»The magic of yearning
By ShawnA December 26, 2014 Letters

I read once that we all have a “happiness set-point,” and that it usually returns about six months after a trauma or extreme life event. In other words, a miserable person who wins the lottery is soon a miserable millionaire. Likewise, joyful souls have a knack for bouncing back from adversity. 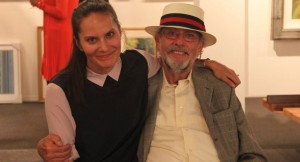 Scientists suggest that we can rewire our brains for a higher happiness set-point by smiling, visualizing beautiful experiences and paying attention to the good stuff of life. Artists, while often sensitive, are also attuned to wonder and appreciation. They know that in these moments of magic happiness flourishes. Last month I watched penguins skim in from the Tasman Sea, pulling sleek, rope-like wakes behind them like miniature ocean liners. Post-dusk, a Prussian blue horizon and the high purrs of hungry chicks made me stop in the night breezes, as dutiful parents regurgitated anchovies for their young. Then, as quickly as the wonder came, it left, leaving in its place a little hole that grew in the shape of longing. I lugged that hole back along the boardwalk towards the city like it was a giant boulder — cold and rhetorical — What to do with all this beauty, without my Dad to share it with, to be my witness and to make its meaning? 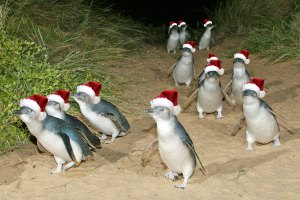 My husband, Peter, squeezed my hand as we walked in silence. “So this is grief,” I thought. Grief is stunning and artful, flaring like a fever when faced with magic. “What a wonder.”

PS: “Blessed is the season which engages the whole world in a conspiracy of love.” (Hamilton Wright Mabie)

Esoterica: This morning I re-read a letter Dad wrote to you on Christmas Day, 2001. Here’s part of it: 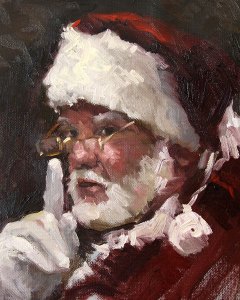 “It’s the night before Christmas and I’ve decided to paint. My daughter, Sara, (the artist) phones and tells me the four stages of life:

“It’s sort of like an extra bit of peace has been provided for this little extra blast with the brush. My son James (the filmmaker) phones to ask if I saw the documentary on PBS about Jewish kids and Arab kids crossing checkpoints in Israel and Palestine in order to play ordinary kids games with each other. I tell him I want to see that one. My son David (the musician) phones to say he can’t think of anything I need and by the way what do I need? I can’t think of anything I need. Not a thing. Except perhaps better work — and he can’t help me much with that. ‘How’s about a book on How to Paint,’ he suggests. ‘Go for it,’ I say. “Then the intercom goes off. It’s Carol. I clean my brushes and lay my finger aside of my nose. I remember to put the lid on the Titanium white. I’m feeling like the down of a thistle. I attach Emily’s antlers. There’s Clausal duties.” (Robert Genn)