You are at:Home»Letters»The stage
By ShawnA May 15, 2001 Letters

In County Galway they have a saying: “If you can see the Aran Islands, it’s going to rain — if you can’t see the Aran Islands, it’s raining.” I’m actually on a vast landscape called the Burren — a desolate, windswept bog-land known for its blue wildflowers and its black sheep. Ancient limestone walls follow rolling contours in all directions. The fast-moving clouds seem to be below the horizon and the air is full of linnet’s wings. I’m hunched beside the car, under the wind. A red-haired colleen with an oversized Irish wolfhound drops by to say hello.

After a few shy exchanges it’s established that she paints too. I ask her what she thinks of the artistic potential of the place. “I always keep my eye on the Bens,” she says. She’s referring to “The Twelve Bens,” the prominent mountain range in the west of Eire, some of the rounded peaks just visible to the north and which now seem to move and turn against the darkening sky. “They tell the conditions,” she says. She’s watching closely what I do — I can’t tell if it’s with approval or disapproval. “You see,” she says, “The place is wonderful and it’s home, but it’s just a stage. It’s all to do with what happens on the stage. ‘Tis, really.”

I’m working in acrylic. I glaze the whole thing a shade darker and reorganize the sky with a burst of light which was sort of there a minute ago. Then I lay a one-stroke strip of golden emerald below a distant wall. “Sign it,” she says.

PS: “The friends that have it I do wrong
When ever I remake a song
Should know what issue is at stake,
It is myself that I remake.” (W B Yeats)

Esoterica: Surprisingly, well-thinned black is an effective color in glazing. Because of its relative neutrality it doesn’t affect adjacent colors harshly — rather it tones down all colors and prepares the way for high-chroma and high-key accents.

The following are selected responses to the letter above. Thank you for writing. 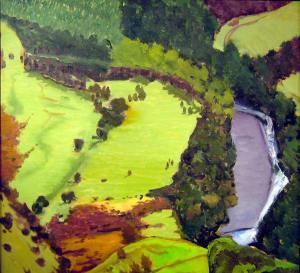 Did you know that the lore of glazing in black goes all the way back to Pliny’s Natural History? It is in fact the original old master secret. Pliny relates that Apelles (4th C. Athens) used it in precisely the manner you describe. The subject of painting technique has been enshrouded in the occult ever since. The whole matter of glazing gives pause to the wise painter, and then there is the paradox of black on the color wheel. Black as an enabler of color and a color itself, indeed very likely the first color. No great point here except to weigh in on the whatness of black, granddame of neutrality, arbiter of sobriety and violence. Incidentally, your website and newsletter are anodyne in the erstwhile bloated cant of post-blather artcomm.

I had my first two days painting in Ireland on a 200 year old farm. I loved the old walls, buildings and open pastures. I walked the fields and kept my eyes open for little people but never saw a one. There was an older fellow down the road from this farm that no matter what time of day we went by, there he stood. Twill jacket, cord pants, tweed hat and pipe. Day or night there he was on his back stoop under the light smoking his pipe. I began to think he was a ghost because he never moved and there was a black cat that also stood watch. The people I traveled with got photos of him and had a wee chat as well. He was the old gatekeeper for the very farm we were staying at. They asked if they could take his picture as an artist was wanting to paint him. He said, “If I had known that I would have tarted myself up a bit.” I have just completed the first pastel portrait of Mr. Murphy and have several more on the back burner.

I agree with Rodin that a portrait without soul is merely a technically executed likeness, and this can easily be captured by a camera. So, what about other art pieces? How does one find the “soul” of a still life or landscape?? I want to put “soul” into all of my art…not just my portraits. I want all of my artwork to touch the viewer deeply rather than superficially, to speak to their own souls. It’s beginning to look like this is quite possibly a lifelong quest.

I just love painting on black… I used to paint on black silk, stretched like canvas, and still do, on occasion. I’m painting on canvas now, and find that my best paintings are those that I “start over” by spraying the whole canvas black and going from there. I once wrote and article about painting on black, and it’s still my preferred method. “Going from Darkness to the Light….” must be a glimpse into my psyche…

(RG note) Make sure the black primer is well isolated from the colors that are to be placed on top. “Creep” may occur, and black is particularly virulent. I use a coat of clear acrylic medium.

The road to Doolin
by Irene Brady Thomas

I have taken that same road toward Doolin. We stayed at Aran House and watched the weather change every 5 minutes. That afternoon we entered the pub for a “jar” and some good “craic” and found in that remote area a classmate of my sister’s, from Chicago. Smiling eyed Micho Russell, one of the last of the old traditional musicians, played his whistle that night. Then he asked us to sing for him. (When you visit an Irish singing pub, be prepared to perform a poem or a song.)

Ireland is full of unique individuals. One of them is writer and artist Tim Robinson who lives in Roundstone, Co. Galway, which is near the area you describe. Tim has made a lifelong effort to map and name areas of beauty and interest around Galway Bay, the Aran Islands, the Burren and Connemara. These maps are famous for their exactitude and artistry, are widely used by artists and also in universities and schools. They inform visitors about the region’s culture and landscapes, and identify the uniqueness of local environment and history. His work is called “Folding Landscapes.” Tim’s website is at http://www.foldinglandscapes.com/

(RG note) Tim’s map of the Burren is in my pocket.

Grace and miracles
by Arnold Block

I spent a month traveling and painting in Ireland in 1999 and learned a great deal about working with greens. Particularly the west of Eire and Donegal is a place filled with grace and miracles. “One wonders in these places why anyone is left in Dublin, or London, or Paris, when it would be better, one would think, to live in a tent or a hut with this magnificent sea and sky, and to breath this air, which is like wine in one’s teeth.” (J. M Synge, In West Kerry, 1907)

To keep the palette wet I fold several paper towels (soft ones) and immerse in water then gently release some of the excess water and pat onto a tray (Styrofoam or heavier for plein-air.) then spritz with water as needed. Acrylic remains moist in a plastic bag for later, also stabilizes if set up and sealed hours earlier. This takes some adjustment for impasto or palette knife techniques when loading the brush, etc. Otherwise, I paint as if time is of the essence, usually these paintings are the real KEEPERS. I discontinued teaching w/c as most of the students are retired and have various limitations. They often go el cheap’o on their supply list by making substitutions. Then when they can’t do a “fix up” they pass me the guilt platter. I primarily recommend Liquitex, and also have Galleria, Atelier, and Brera. I prefer the cold or hot press texture of w/c paper. While visiting England I purchased a pad of Cryla which is similar to hot press, primarily for acrylic. It is not available in the USA or is discontinued. I have sponsored many seminars in Missouri and Indiana. I would like very much to have guest artists conduct seminars at KSUniversity, where I teach. It is a perfect physical set up.

For the love of it
by Mary Jean

One of your responses to your letter was right on —  sketching for the love of it and not for the commission, produces a more accurate and relaxed image. Children are wonderful subjects, because of the candid reflection of yourself in their eyes. They are not intimidated or self-conscious, so if you can stand their unabashed scrutiny, they will remain wide open to you. An older person, more self-conscious will be revealed in the lines between their eyebrows, the lines on their foreheads and in the corners of their eyes, and those around the mouth and chin. I always feel honored to be allowed to really look at what most people try to hide.

One of my big beefs is that there is much appropriation of techniques and ideas, as well as images. I know of a number of artists who claim they have developed methods as their own, but from my years of study, know who was the originator of the idea. I can personally speak of others stealing my process and invention of equipment and pawning them off as their own, even after I have published in referenced journals and on the web. Two have actually been given patents in the USA, and one I was able to challenge with the patent office because I found out he had a patent pending. Like you, I give my information freely with no charge, except if I am asked to give a workshop.

It has been a long, long road to get to where I am… the here and now. In the many yesterdays of years gone by no friend has ever stayed by me, nor sought me out or asked me to stay… I suppose I have never been much of a friend then? I ask why and how can that be? I often thought I had dear friends, close friends but I must have not. For where are they now? Those I loved, those I cared for, those I gave my heart to? Where are they now? I remember clearly warm moments and intimate encounters that were so beautiful. But these people — do they ever think of me? Do they call me, drop me a note? Do they yet remember me, or was I a token friend, someone who filled their needs, one who provided a temporary service? So this is my lot in life, to live alone, without friends or even neighbors to drop by. Then perhaps I never learned the meaning of friendship, never learned acceptance, patience and consideration. I often thought I had dear friends, close friends but I must have not. Or, maybe it is because I have an unlisted number and I have not written to anyone to let them know my new address?

You may be interested to know that artists from 86 countries have visited these sites since January 1, 2001.

That includes Michael Joseph Depraida who has a travel-cam and is currently wandering in Queens, NY.

And Maureen O’Leary who’s heart yearns for the old sod.

And Johan Sandstrom who says, “Thanks for the postcard.”

And Varteni, who says “Salute to the spirit that lingers always in the arena of human emotions and creation.”

And John MacNeill, of Nanaimo, BC, who is “currently immersed in “NORA,” a biography of a Galway lass who was the love & companion of James Joyce.”

And ECK painter Paul Gotts of Linden, NJ, who says “Let the blessings be.”