You are at:Home»Letters»They said it was hopeless
By ShawnA October 6, 2015 Letters

Robb Dunfield was an active nineteen-year-old sportsman, ski instructor, and all ’round good chap when he had his accident. He and three of his friends plunged from an insecure balcony of an unfinished building. Robb received irreversible injuries — a severed spine. 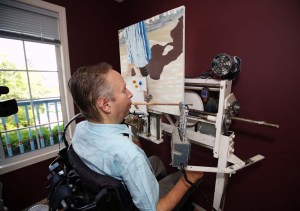 Robb was confined to a quadriplegic hospital, paralyzed from the neck down. For years he lay there, a ventilator doing his breathing, at times without even his voice, a ward of the state and a source of anguish for his family. One day he told me he wanted to learn to paint.

We worked together over a period of years. My idea was that Robb would be not just a good mouth painter, but a good painter — period. For his part, he saw painting as the key to his independence and self-respect. It was frustrating just watching him. He would take hours to do what you and I can do in minutes. 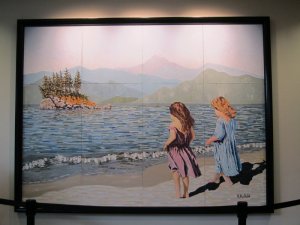 Robb Dunfield persisted. People began to be charmed by his oils and his gentle nature. One day he told me that his goal in life was to be a giver and not a taker. I suggested he might have some of his works turned into photo-litho prints and offered as fund-raisers for charities. As of today Robb’s work has directly raised over $1,500,000.00 for Paraplegic Associations, and other charities. This sort of generosity has been a factor in facilitating the sale of his originals to his own benefit for excellent prices.

Today, twenty-two years after those few seconds that changed his life, Robb is a successful artist, public speaker and facilitator of young people to face inevitable change and to reach toward achieving their dreams. Free of hospitals, he lives in an elevatored home in the country, is married to beautiful Sarah and they now have their very own twin girls. Not bad for a hopeless case. 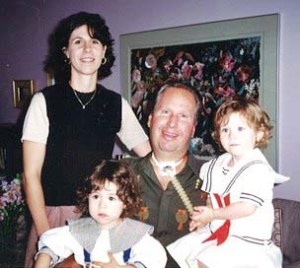 Sarah, Robb and their twin girls

PS: “People with disabilities still constitute a small minority. Yet the Beautiful People — the slender, fair and perfect ones — form a minority that may be even smaller.” (Debra Kent)

The book If Sarah will Take Me by Dave Bouchard, tells about his remarkable life and what he’s achieved so far.

This letter was originally published as “They said it was hopeless” on April 21, 2000. To date, Robb is the Senior Coordinator for the Rick Hansen Ambassador program. If you’d like to know more, watch the 2014 video, “Meet Our Ambassadors — Robb Dunfield.”