We’ve talked a few times about audacity, which is a totally good thing unless you don’t know what you’re doing. Think of a surgeon giving someone an artificial hip with a load of audacity and no knowledge. It smarts, and besides, it causes you to walk funny. And then there’s the system of “commit and correct,” which is golden when you have something to commit to. Now here’s another: TTS — the “Timid Test System.” When you’re sitting back with a glass, looking at a work in progress, you’re asking, “What could be?” With time and a curious mind, a few ideas pop up. This is when you need to go up to the canvas and lightly touch in your possible maneuvers. Having put something in, however meekly, gives an idea of just how great something might be later. Toward the final stage of the painting, you can put it in with audacity.

The “What could be?” question is a personal one. What you ask is your own business and the follow up is in your own sweet time. It’s your ability to make choices that leads to effective, professional and unique work. It goes like this: “In that area, in that place, I wonder what it would look like……. if that light over there really dazzled? if there were an extreme gradation? if darks were really punched in? if that colour were rethought and sophisticated? if that colour were intensified or changed? if curves took precedent over straights? if this were made to line up with that? if there were a further element of depth added? if that place could be better formed? 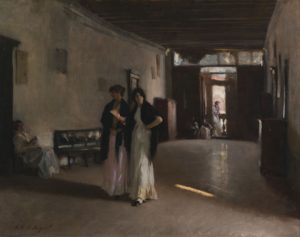 A few years ago, just below the parking lot at Moraine Lake in the Canadian Rockies, I was painting and scratching my head. A couple in a Lincoln with Utah plates pulled up, and, after watching me from the car for a few minutes, got out and came closer. “Very much in the style of Robert Genn. Did you know him?” said the man. I told him I did a bit and that I thought Robert was probably still alive. I asked the couple if they thought my style might be a little more timid than Robert’s. “Yes,” he said, “yours is really nice, really good, but he had a lot of verve and energy in his, don’t you think?” I told them that like Robert I often put my verve and energy in later on. The couple watched me for a minute or so, then wandered down the beach. “Keep at it,” said the woman as they left. 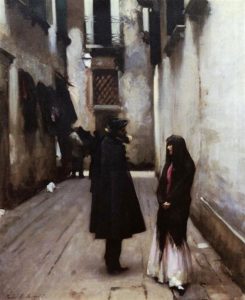 PS: “Start with a whisk and end with a broom.” (John Singer Sargent)

Esoterica: Creativity means thinking on your feet, making adjustments and sorties as you go along, advancing commitment as well as erasure. Unless you express your wishes, however modestly or timidly, you may never know your power. Your general overall theme may be audacious, even simply audacious, but it is the final, well-planned flourishes that will help your work to fly.

This letter was originally published as “The Timid Test System” on October 12, 2010. Sometimes we see what no one looks for–images that have waited for us to find them. If we are lucky, these images will wait while we try to capture them with paint on canvas. They will probably change as we reach for them. I believe that if we clearly and honestly record what we see, we will be surprised, enriched, and sometimes stunned by what we’ve found.

There is almost always a narrative in my paintings as I believe that a story may be introduced in a scene. The viewer must fill in the before and after with unique eyes and experience, but enough can be presented to set a challenging stage if the work is successful.

Along with being a visual story teller, I’ve been called a colorist, surrealist, patternist, and sometimes a texturist. I’m an Atlanta artist–an oil painter for over twenty-five years–with a studio in Brookhaven. I love working with oils because each painting session results in a new revelation of what they might do. There is a mystical quality to each painting and each day for me.

Finally, and always, there is a spiritual quest in my paintings. Driving that are the essential questions of why we are here, what we can or should or might do here, how we got here, and where we might be going. Just as I believe that there is a spirit in all things, I try to instill a bit of that spirit into each brushstroke.
www.joelbarr.com
Share. Twitter Facebook Google+ Pinterest LinkedIn Tumblr Email Print