You are at:Home»Letters»‘Too beautiful to pass up’
By clearmarble May 13, 2014 Letters
Dear Artist, Early one morning long ago, I was at my studio easel when an acquaintance, a fellow boater, phoned to give me an unusual tip. “Did you know,” he asked, “that a guy is living on a derelict fish boat at anchor in the Nicomekl River on the big bend, and he’s got scads of your paintings stashed about on board?” 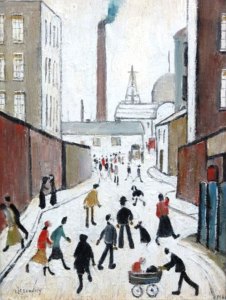 “A Street Scene Near a Factory” by UK artist LS Lowry, 1961 was hidden in a suitcase and kept on top of a wardrobe for 12 years, in an effort to keep it safe. It had never been seen by the public until it went to auction on May 7, 2014.

I thanked my friend and, later that day, sized up the situation down by the river. I was familiar with the old seiner, now reconfigured as an ungainly liveaboard, having avoided it as possible subject matter for a painting on several occasions. I was not familiar with the possibility that there might be a private and very personal art museum right under my nose. While taking photos of the boat from the shore I noticed someone moving about below deck. After a few minutes trying to decide what to do, I helped myself to an old tender lying at river’s edge, rowed out and decisively bumped along side. “Permission to come aboard, sir,” I called out. A shabby but pleasant looking fellow helped me aboard and when I sat myself down on his gunwhale, he looked like he was going to jump out of his Wellingtons. “Oh my God,” he said, “You’re Robert Genn. I’m the fellow who is holding on to your paintings.” “Where’d you get them?” I asked. “From your storage at the bottom of your property. They were too beautiful to pass up. Here, I’ll show you,” he said, glancing toward the parking lot ashore as he went below. In a few minutes there were several dozen, mostly larger and middle-sized acrylics on deck, lovingly placed as each was waited upon for my quick approval. It was an eclectic collection that included New Mexico, The Far North of Canada, Eire, Spain, Portugal and Mexico. Figurative works were particularly well represented. “That’s it?” I asked, when the show ended. “That’s it,” he said. I stood up as if I was also the kind of guy who knew a lot of cops onshore. “Throw the paintings into my dingy,” I said, “I shall row quietly away, and you shall not hear from me again.” And he did. And I did. I think it was the only time I’ve ever felt bad while rowing. I could have given him at least one, but didn’t — none that I know of, anyway. Best regards, Robert PS: “Collectors are happy people.” (Johann Wolfgang von Goethe) Esoterica: The paintings had disappeared from “the storage at the bottom of my property” years before. Many of the staples on the canvas were rusty and some of the edges were deteriorated by persistent moisture. My assistant and I relined and remounted some of them. Others have been left just the way they were. They are now in better, stronger storage as tribute to the concept that for some folks art can be “too beautiful to pass up.”   [fbcomments url=”http://clicks.robertgenn.com/too-beautiful.php”]  Featured Workshop: John David Anderson