You are at:Home»Letters»Tradition
By ShawnA October 10, 2000 Letters

South of Arles on a small canal there’s a famous bridge. Moved from its former site, it’s almost as Vincent Van Gogh would have seen it in 1888. Today it’s off a secondary road and fairly difficult to find.

The air is full of lavender and asparagus. Ripening sunflowers nod like happy-faces. Black cypresses — those expressive exclamation points in the Provençal landscape — bow to an unseasonable mistral. On foot I’ve been circling the bridge for an hour. There’s not one view here; there’s at least a hundred. I set my box down on the remains of a stone weir, pull the cork on a local red and crack into a baguette. There’s no one around. It’s time. I’m painting low, below the wind.

There’s no tomorrow, no yesterday; nothing’s happened since Napoleon. A solitary fisherman on the far bank swings his bamboo pole over the canal, then moves along, canvassing the water inch by inch as if the fish have been stationary for years. The brush moves here and there, sometimes struggling, sometimes with easy joy. My mind is drifting on the greater French rivers: the Somme, the Seine, the Meuse. By the time my systematic fisherman has disappeared from view, I have done what I can with this bridge. Not good, I think, but nevertheless a small miracle. In the pension tonight I’ll lean on the maul-stick and tighten up the bits around the verticals. I know full well I’ll find problems that I do not now see, and problems that are bothering me right now, won’t then. And at the bedside table — there’s always one — I’ll repaint the sky around the bridge — smooth it out — so Vincent’s swirls won’t show. 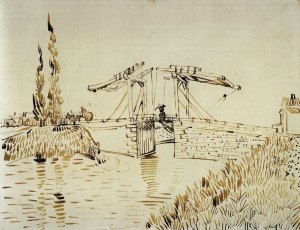 Esoterica: Vincent sent his bridge painting to his brother Theo, hoping it would be sold in Amsterdam. Particular about details, Vincent specified that the painting “ought to be framed as follows: front Royal blue, the sides gold. The frame could also be covered in blue plush, but painted would be better.”

The following are selected correspondence relating to the above letter. If you find value in any of this please feel free to copy to a friend or fellow artist. We have no other motivation than to give creative people an opportunity to share ideas and possibly broaden their capabilities Thank you for writing.

I once visited Arles, and walked where Vincent had walked and saw the light in early fall as he might have seen it nearly 100 years earlier. I understood about the Provencal colours then, and I cried inside with joy at being able to understand what he was saying with his paint box and his brush. I wanted to share my new understanding with someone but found the people in the town and the pension, though kind, indifferent to my discovery and like they were in Van Gogh’s time unfazed by notoriety, just going about their daily lives.

I sketched my father this weekend. My father is 83 and getting pretty frail. He has a beautiful transparency to his skin and his hard features have so softened. His eyes have become a darker piercing blue and are highly contrasted to his pale skin and white hair. My father never took my talent seriously, especially because I am a woman and should have been cooking or washing the bathroom for some ungrateful man. However, this time, he sat and let me do this as long as I wanted, he never asked to see, and never commented on what I did. It was his own quiet way of saying I accept that you have a talent even if I don’t understand it. My brother who is also an artist and who hasn’t spoken to me in 10 years, supplied me with the paper and pencil.

The light of Provence
by Betsy Kuhn, Albuquerque, NM, USA

I was raised in Orleans. The images stay with me always, but what is most unspeakable was the way I remember the light — especially after a rain. I have never seen such light since. I hope I will return someday.

Without benefit of pencils
by Cassandra James, Texas, USA

I teach introductory Painting based on good drawing skills, but my supply list does not include pencil or charcoal. I tell the students that they all know how to draw with pencils and charcoal (at least MOST that come to me do), and that in a Painting class, they are to learn how to draw with paint. While some balk at this approach and I find them sneaking a pencil drawing from time to time, the truth is they quickly learn to master the brush and the final product is fresher and has so much more life. It moves the painting along much faster too, especially if that underdrawing (with paint) is done with a dark neutral including shadow areas, as well as darkest darks. They can easily step back to check drawing and see where corrections are needed.

Those of us who have laboured in commercial art, sign writing, etc., know the value of maul-sticks and hand-bridges of all sorts. It’s impossible to do fine work in some instances without these tools. One sees the odd picture of an old master using one — but they are conspicuously absent from today’s studios.

I have made it my business to photograph bridges of all sorts. For me they are a kind of metaphor and have always held my interest — since I was a kid. I photograph everything from great trestles to rustic suspensions built by boy scouts across brooks, and, of course, the bridges of Madison County. It’s something to do with wanting to get to the other side.

When you paint or otherwise create art you are lost to the world. It is a space that is unique and known only to those who do it often. Time passes quickly, like a trance. Is something else guiding my hand? Is someone else causing me to stroke this way?

It’s satisfying to hear that Vincent Van Gogh was particular about framing. One would have thought him above all that. It’s a gripe with me that my best efforts when sent to galleries in other areas where I do not have any control — are framed in the most god-awful frames. I have stopped specifying — it falls on deaf ears.

Tomorrow I begin a new path… You may hear of
me… One ignored, bored, and burdened with the
knowledge of the Universe, bathed in the light
of sacrifice, scorched with the ignorance of the
‘never to understand’ and gladened by the bath
of the truly ordained…

Yes, I am ordained! My path is solid, no one can soil
the Gift of creativity that I have nurtured over the
many years of struggle! I will endure, as the faint
sigh of ignorance walks away from me!

Yes, I am an Artist, I take a virgin canvas, and
create things never seen on this Earth before,
yes, and remembering that everything Man made
began with an Artist, Yes, I will endure, and you,
the untalented, the non-creative, will never know
the enchantment, the ecstasy of being me!

You may be interested to know that artists from 74 countries have visited these sites since June 1, 2000.

That includes Norma Blann of West Vancouver, BC, who only last week painted a watercolor at Vincent’s bridge, and also my dad, H D Genn, of Victoria, BC, who contributed the following: