You are at:Home»Letters»Triple-think
By ShawnA March 23, 2001 Letters

After a one-person show a kind of post-partum psychosis sets in, which generally lasts for a day or so, then, for some reason, there’s a need to go back to work. Looking for the secret at the easel, I remembered, “It’s a matter of thinking one thing while you’re thinking of other things.” A modest understanding, but it’s useful. Often we merely push on — leaving the work to evolve in the hands of the gods — very much as a potter surrenders his clay to the “Kiln God.” Sure, there’s a place for intuition and just letting flow — but there’s also a need to bring in all of the strategy we can muster. I call it triple-think. Here are some examples:

Keep the subject in focus while dealing with mother-color, overall composition, or happenstance.

Render the design while being aware of opportunities for condition — weather, light, or feelings.

Get the figure anatomically correct while watching for possible elements of psychological depth or obscure or secondary meanings.

Work on ideas and emotions while keeping in mind stylistic tendencies and the potential of end-play.

Accept complexity and layering while taking pains to make it look deceptively simple.

Each artist’s uniqueness and individualism brings endless variations. This dynamism invites the “Keeping-in-Mind-God” to play a part in the work’s evolution, enriching the process. The job becomes an intellectual as well as a technical and emotional exercise. The idea is to stretch your brain so your act of art is your very own.

PS: “All you need to do to receive guidance is to ask for it and then listen.” (Sanaya Roman)

Esoterica: Begin at the beginning. Open the gates to downstream possibilities. Go with the flow and pay attention to fortuitous tributaries. “The great majority of men are bundles of beginnings.” (Ralph Waldo Emerson)

Listing the only way
by Signe Plourde

“The art of an artist must be his own art. It is always a continuous chain of little inventions, little technical discoveries of one’s own, in one’s relation to the tools, the materials and the colors.” (Emil Nolde) 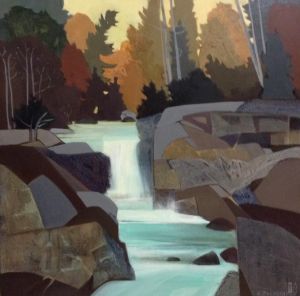 I just returned from painting all day. I created a nice ground on ten pieces, started seven and almost finished one (except for the end-play). Tomorrow I can start all over again with no interruptions. Checking for email is perfect for a short tea break. The mention of the figure being anatomically correct is something I will discuss with a friend. She was very distressed when we juried a show the other night and she wondered why one of her pieces wasn’t accepted. She asked why and I told her it had some problems with the anatomy. She told me the painting was about texture.

No gods required
by Mikki Senkarik

We get our inspiration from FedEx. Our business manager FedEx’s our bills to us once a week. We open them and it inspires us to get to the easel. No magical meditating…just the need to earn some money to pay our bills. I remember when we lived in Hawaii, other artists would go to the volcano and sit waiting for Pele to give them inspiration. We never had time to waste sitting and waiting. Our galleries sell all we can do…about a fast as we can paint them. We live in an upscale gated country-club and drive a very expensive SUV…all this requires $$$. We simply plan our work and work our plan. We know before we go to bed what we will be working on the next day.

You mentioned the depression that sets in after a one-man show. I have noticed this too. Generally my depression lasts for a couple of days and has nothing to do with the success of the show. Even after a complete sell-out, which I frequently have, it takes some time before I get my head straight again. Any ideas? (DK)

(RG note) Other artists may have something different to say on this. I’ve noticed a kind of depression after any big event — even a fair or interactive social happening that has a lot of excitement. In the case of one-man shows I think it has something to do with talking. To me, talking has a tendency to cheapen what I do. Also, I have a fear that I may have said something wrong, stupid or thoughtless. Just going from the commercial focus and public appreciation to the quiet solitude of the studio brings the realization that you are after all alone. Fortunately this depression does not last long. It can be fixed by doing more work and the spirit inevitably begins to build for the next exposure.

And good sex too
by Phaedra

After reading your letter, my thoughts were focused on the World Champion Skating Competitions… the ten minutes of fame, after years of study, the echo of, “5.2, 5.2, 5.3, 5.2”!! The expression of disbelief on the competitors’ faces, as one by one, they are scrutinized for every subtle nuance indicative of lack of proper form or technique. The suggestion that one is to old to compete at age 29; the glory of the hour lost once the stage is dismantled, and each competitor is left to deal with his or her victory or defeat, in deafening silence, once home. So, I can only imagine it must be with an art showing. As a writer, this experience is a regular occurrence for me, except that I do not have to face the cheering mob, or the off the cuff remarks from the public, as I have allowed myself the selfish pleasure of keeping most of my work to myself. I am plagued with the need to meander to places unknown, very late at night, in the company of Jacqueline Du Pre, or Chopin, and three furry cats that crowd around my instrument of flight. It often works like this: All day long I feel pressure to write something, get on with what is expected, only to sit staring at a blank screen, pre-occupied with a story or poem. Today, it was Dylan Thomas’s Fern Hill… “night beneath the starry dingle”… “Time held me green and dying, though I sang in my chains like the sea.” Somehow, this was connected to the skaters, their ‘age barrier,’ and the fact that I was not going to produce anything worthy of a standing ovation, no matter how long I daydreamed! I bedded down with my partner of many years, had mind-expanding sex, and fell into a comatose sleep. At midnight, I wakened to the gentle tapping of my soul-bonded kitty’s paw against my face, and suddenly, I knew I could do the triple and quadruple jumps. Three minutes later, I was at the computer, clattering away as if my life depended on it, and ENJOYING it! Fifteen minutes later, the article was complete, and sent, and I was on the podium accepting the gold medal. For me, there is a rhythm, of lethargy, daydreaming, bed, (preferable with good sex), and sleep. While asleep, a very long arm seems to reach into the recesses of my mind, and I come clearly on line aware of what I want to write, and I must attend to it at the very moment I am jolted awake, so as not to lose the spotlight in the arena.

(RG note) Those little nuances of extra care and personality that you put in at the end of the activity. It’s been my experience that these flourishes are instrumental in realizing your own uniqueness and consequently give great satisfaction.

There’s a trend nowadays to achieve some sort of simple abundance. While this may be noble and ecologically sound, it’s contrary to the development of creativity and the advancement of society. Art is a complex business. Artists who recognize this and develop skills ranging from multitracking production systems to the strategic distribution of their art are the ones who succeed and stay in the field.

“Accept complexity and layering while taking pains to make it look deceptively simple.” I did an 18 by 24 charcoal sketch, including shading. Fixed it, covered it with a raw sienna wash, then spent several days covering it with oil paint. Several spectators over the last few days have remarked how nice it must be to be able to do such a good painting in one afternoon. It does get simpler each painting I do. Amazing what you can learn holding one end of a brush.

Thinking is the enemy of creativity. Only non-genius artists need to think what to do next. Mozart is a good example. Themes and variations just sprung into his head and it was just a matter of writing them down. (WW)

Only begin
Contributed by Micaela Olmos

“Boldness has genius, power and magic. Engage, and the mind grows heated. Begin, and the work will be completed.” (Goethe)

You may be interested to know that artists from 81 countries have visited these sites since January 1, 2001.

That includes Dan Cooper of Larkspur, California who just spent some time staying in chambres d’hotes and painting in Perigord and Lot.

And Patty Riply of somewhere, who says, “Horoscope is to art as doggy dreams are to Sally” (Sally is a yellow Labrador who also happens to be Saggitarius)

We are conducting a survey to find if there is any possible correlation between the production of art and the zodiac. If you wish to participate please send your birth sign and also indicate one of the following:

I know it’s a bit categorical but we wanted to break it down a bit. Also, if you have the information, it might be useful if you indicated your brain tendency as right, left, or center. We will report back to you when we have enough to make the survey worthwhile. You might consider inviting artist friends to participate as well. We’ll keep it anonymous.