You are at:Home»Letters»What makes good design?
By ShawnA April 10, 2015 Letters

I’m laptopping you from the Museum of the City of New York, where on view are 150 examples of the work of ’50s ad man Paul Rand. Rand was alreadya Madison Avenue superstar in 1941 when at the age 27 he was appointed Chief Art Director of William H. Weintraub & Co. From there he drove what became known as the “Creative Revolution” — replacing dense, explanatory text and the dominion of copywriting with a new, art-driven approach to form and visual communication in advertising. His early influences were European — Paul Klee, A.M. Cassandre, Swiss typographic theory, Bauhaus. 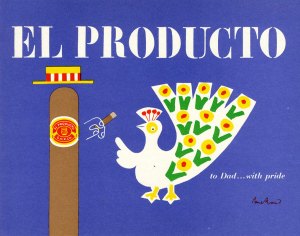 “Simplicity is not the goal. It is the by-product of a good idea and modest expectations.” ​(Paul Rand)

With the exception of a few night classes at Pratt as a beginner, Rand taught himself by painting signs for his father’s Brooklyn grocery store and reading German art magazines. Later, he did page layout and covers for “Apparel Arts” and “Esquire” Magazine. “Graphic design…is not good design if it does not co-operate as an instrument in the service of communication,” said Rand. Rand’s designs oozed style and conviction. Here are a few tips:

Combine collage, hand lettering, drawing and photography — borrow from the constructivists, be playful.

Use a limited palette of complimentary colours close in saturation to create bounce and vibration. Choose bold primaries, and for times that call for sophistication, tertiary, mid-chroma pastels.

Understand the value of positive and negative shapes and spaces. Play with the negative areas created by large text and silhouettes. Create new shapes in the recesses of known shapes. 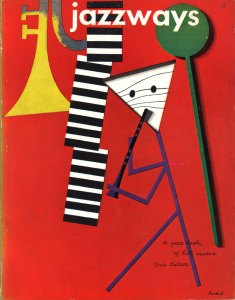 Know that an image’s effectiveness lies in its ability to communicate a message simply. Let your layouts luxuriate in the white page — use blank space to rest the eye and elevate your iconography.

Focus on composition and eye control first, and make your shapes meaningful and message clear. Know that visual language should be both beautiful and functional.

Sign your name to your work. Rand’s is on everything he touched. When another agency needed a new art director in 1953, they took out an ad in the “New York Times”: “Wanted: Art Director with a modern, creative touch. Need not be a Rand but must be able to inspire an art department.” 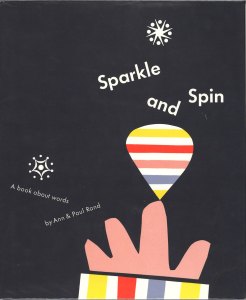 “Sparkle and Spin: A Book About Words”
designed by Paul Rand and written by Ann Rand, 1957

PS: “Everything is design. Everything!” (Paul Rand)

“Graphic design is not good design if it is irrelevant.” (Paul Rand)

Esoterica: Paul Rand was born Peretz Rosenbaum in Brooklyn in 1914. In 1947 he wrote the book, Thoughts on Design, a how-to on the value of simplicity and clarity, colour, form, inventiveness, composition and hand-work. He was 33 and had not yet gone on to design book covers, create logos for IBM, ABC, UPS and Westinghouse, teach at the Yale School of Art, collaborate on children’s books with his wife Ann, be awarded the AIGA Medal and inducted into the Art Director’s Club Hall of Fame. Paul Rand died in 1996 at the age of 82.