You are at:Home»Letters»Your parents’ dream
By ShawnA August 22, 2017 Letters

A friend phoned and brought my attention to a study done at the Harvard Medical Center. It seems that nurture, not nature, is the big factor in the making of creative genius. Talent and genius are not inherited. These were the findings of Dr. Albert Rothenberg, the principle author of the study. Thirty years of research concluded that creative intelligence is due largely to parents’ own unfulfilled dreams of high creative achievement. Researchers used Nobel Prize laureates, Booker and Pulitzer Prize winners, and other cultural and literary awards as evidence of literary genius. These were measured against eminent persons in non-creative occupations. Less than 1% of the eminently creative types had eminently creative parents. This compared, in one example, with 16% for non-creative folks who turned out to have one or both parents in the same profession. 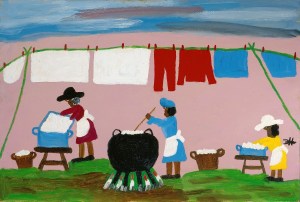 Older studies — notably the work of 19th century psychologist Sir Francis Galton — had concluded that talent and genius were inherited. The founder of the Eugenics movement, Galton was working with mainly British aristocracy where primogeniture and the continuation of father-son professions were the norm. In the Harvard study, it seems that “being read to or told stories by parents or grandparents” was the most important indicator of future literary stardom. 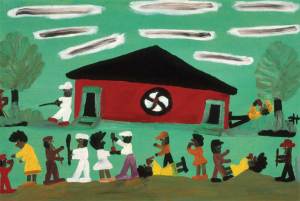 Accepting that visual art achievement is a little harder to quantify, early art appreciation and parental approval of creative effort may be of the highest value.

Another telephone colleague complained that he received nothing but parental abuse and discouragement in his art. But his tough and contrary nature saw him overcome. He told me how he taught himself what he needed to know, learned to work the system — and won. Maybe he was an exception. Maybe not. Something I’ve noticed though — love and anger are both valid motivators. When there is love there is nurture. Love is the sweeter way. 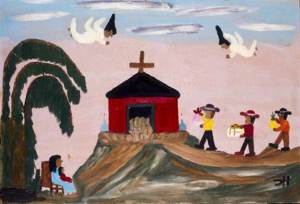 PS: “Where there is natural growth, a full and free play of faculties, genius will manifest itself.” (Robert Henri) “That’s very good, Bob.” (Florence Genn, my mother, when I was about four)

Esoterica: Then there is “non-achievement” by the offspring of the focused and perhaps famous parent. Add to that the mystery of father-son and mother-daughter dynamics. “Coming up to expectations” and “being her own person” enact their toll. In my opinion, general stroking should take precedence over specific management. The “I’m okay, you’re okay,” idea. As well, the thought needs to be gently spread around the dinner table that the future sky can handle lots of stars.

This letter was originally published as “Your parents’ dream” on May 11, 2004. 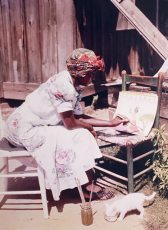 Clementine Hunter first exhibited her work in New Orleans, Louisiana, in 1949. In the 1970s she had major exhibits on both coasts of the United States. She was also invited to Washington, D.C., by President Jimmy Carter for an opening exhibition of her work. Hunter continued to paint until one month before her death at age 101. (Encyclopedia Britannica)
Illustrated Book: Clementine Hunter: American Folk Artist by James Wilson

“Art is, after all, only a trace — like a footprint which shows that one has walked bravely and in great happiness.” (Robert Henri)