You are at:Home»Letters»The closed-mouth convention
By sara genn December 8, 2020 Letters

You’ll be glad to know this letter has nothing to do with not talking about your art. It has to do with the business of painting people with their mouths closed. While a toothy smile may suggest desirable qualities like a happy nature and a sense of humour, in painted portraits it may not be such a good idea. We need look no further than George Washington for this convention. In 1789, when Washington was 57 and inaugurated as president of the U.S., he had only one of his original teeth left. The late Dr. Reidar F. Sognnaes was a scholar in the field of oral pathology at the University of California School of Dentistry in Los Angeles. “In the good old days, teeth were lousy,” said Dr. Sognnaes. “Washington suffered such dental agony that he hardly ever laughed through his two terms. He could not pronounce lengthy words or words with “S” sounds, and he was able to eat only soft foods.”

When you look at the work of the great portraitists of old — Gainsborough, Rembrandt, John Singleton Copley, John Singer Sargent and Gilbert Stuart, who painted Washington, there’s nary a tooth to be seen. Stuart’s lifetime oeuvre, for example, seems a paean to lockjaw. Goodness knows the condition of bicuspids in Renaissance Italy. Can you imagine Mona Lisa with a toothy grin?

In the history of portraiture, a few exceptions can be seen. Velasquez and Franz Hals painted jesters and stupid people with open mouths. To this day most portraitists generally keep their subjects in the closed position. There may be a message in this. “Smile,” “Whiskey,” “Cheese,” and other mouthy encouragements are calls reserved for photographers, except in the case of rock musicians where it’s important for people to think rock’s a serious business. Fact is, if you paint a picture of someone with a smile, it’s almost a sure sign it was copied from a photo. If you do try painting an openmouthed sitter over an extended time, she’ll dry out on you and you’ll start to get an irked look that’s less than flattering. On the other hand, if your idea is to make people look irked, by all means insist that they smile. 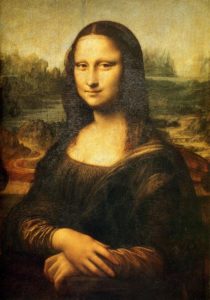 PS: “A portrait is a painting of a person with something wrong with the mouth.” (John Singer Sargent)

Esoterica: If you do paint teeth, you may need to gloss them over and blur them a bit. Portraits don’t usually look so hot when the teeth are painstakingly correct. For some reason carefully delineated teeth tend to look like false teeth. False teeth from Dr Sognnaes’ collection are on display at UCLA. In the good old days the rich and famous had teeth made from the darnedest things. George’s included carvings from elephant and walrus tusks as well as the teeth of cows, hippos, and people. Apparently a difficult mouth to fit, some of his teeth had to be held in place with springs. Contrary to popular belief, none of George’s teeth were made out of wood. The wooden ones were reserved for senators and congressmen.

This letter was originally published as “The closed-mouth convention” on December 7, 2012. 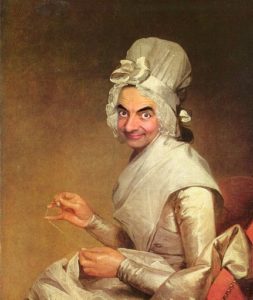