You are at:Home»Letters»The high-buzz mode
By sara genn February 23, 2021 Letters

Back in 1978 Colin Martindale of The University of Maine put some electrodes on some students’ heads and made an art-shaking discovery. Subjects were asked to create stories while the electroencephalogram recorded their brain waves. Creativity, he found, had two main stages — with vastly different types of waves. He called the two stages “inspiration” and “elaboration.” While stories were being dreamed up, brains were surprisingly quiet — mostly alpha waves indicating a low level of cortical arousal. It was the same sort of activity that’s often found in sleep, dreaming or rest — which could explain why sleep and relaxation can help people to be creative. 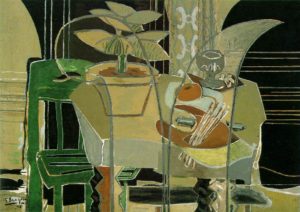 However, when these quiet-minded people were asked to “work on their stories” their brains became suddenly busier — flashing messages back and forth between lobes. Vastly more connectivity, focus, corralling and organization appeared to be going on. Martindale found that the people who had the most creative storylines also showed the greatest contrast between the two types of brain activities.

Many creative folks know about this. But it’s been my observation that about 20% of artists never get into the second stage at all. Without this cortical shift they short-change themselves. The question becomes how to set yourself up to enter the high-buzz mode. Here are a few parallel, creativity-rich modes that might surprise you: 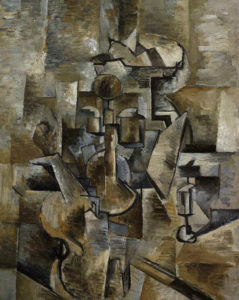 Violin and Candelstick, 1910
Oil on canvas
by Georges Braque

It’s in this “abandon” mode that you can actually feel the brain change. Your tools quicken and they begin to run the show. The mind seems to think ahead, or giddily moves somewhere else. Some artists need a small change of location or posture to go into this elaboration stage. It may also take a trigger — music, memory, pressure, subconscious lapse. Or it may simply happen when the first mode has gone on long enough to play out and let the high-buzz mode begin. Ideally, as in a hybrid vehicle, the power is constantly shifting back and forth to whatever is appropriate and needed at the time. 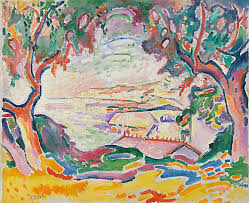 Esoterica: Artists who try to monitor their high-buzz modes often report going into overdrive when the work itself really starts to engage and to win them over. Getting further interested and getting excited replaces the more calculated and cerebral preparatory period. Martindale was one of the first to locate high-buzz creative action on the right side of the brain. He was also one of the first to notice that the most inventive creativity happens when both sides interact freely. 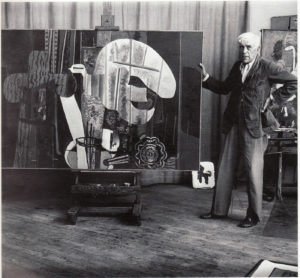 This letter was originally published as “The high-buzz mode” on February 21, 2006.

“Painting is a nail to which I fasten my ideas.” (Georges Braque)