You are at:Home»Letters»Psychic rules
By sara genn December 18, 2020 Letters

When virtually unknown painter Agnes Pelton turned 50, she moved from an abandoned windmill on Long Island, New York to Cathedral City, California. To support herself, she painted competent desert landscapes of smoke trees and the local San Jacinto mountains and sold her works to tourists. The oracular, mystical abstractions she’d had been working on for the past two decades complemented this honouring of the environment as deeper manifestations of her spiritual beliefs and experiences. Like Wassily Kandinsky and her contemporary Lawren Harris, Agnes was a follower of the new religious movement Theosophy, and sought to clarify her explorations by making them visual.

Attracted to the desert for its spiritual colonies, sense of infinity and light, Agnes now doubled down on what had been a near-monastic existence developing a personal visual language in her Greenwich Village studio and then on Long Island. Arthur Wesley Dow, her painting teacher at Pratt, who would go on to teach Georgia O’Keeffe, planted in Agnes the belief that art is a record of the artist’s experience rather than an illustration of something material. Even though she’d been included in the 1913 Armory Show and a show at the Knoedler Gallery, Agnes retreated from the New York scene to focus on a quiet life of spiritual and creative practice.

When Agnes died in 1961 at the age of 79, her work fell further into obscurity. It wasn’t until 1986 that she was included in a large survey called, “The Spiritual in Art: Abstract Painting 1890–1985” at LACMA. It turned out that a lot of artists, including the superstars of the early 20th Century, were channelling Agnes’ psychic rules. “This is the first museum show to suggest not only how widespread the artistic dissatisfaction with all institutional forms of thinking has been, but how widespread it is now,” wrote Michael Benson for the New York Times. “The current artistic interest in the more intuitive, holistic aspects of Eastern thinking is one reflection of it.” 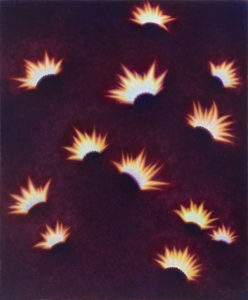 PS: “I feel somewhat like the keeper of a little lighthouse, the beam of which goes farther than I know, and illumines for others more than I can see.” (Agnes Pelton)

Esoterica: When Agnes did once sell a couple of her abstractions to collectors in Santa Barbara, they soon donated them to a museum that wasn’t really interested, who then put them in a fundraising rummage sale for $40. By the time a buyer returned from the bank with a cheque, the price of Agnes’ paintings had been reduced to $5. In 1995, the Palm Springs Art Museum (then called the Palm Springs Desert Museum) mounted the first one-person show of Agnes’ paintings. This month, a century after she began her spiritual and creative practice, the same museum will once again show Agnes in a one-person survey originally organized by the Phoenix Art Museum and then shown at the Whitney earlier this year. Like at the Whitney for much of last spring, “Agnes Pelton: Desert Transcendentalist” is on view, behind currently closed doors, at the Palm Springs Art Museum. 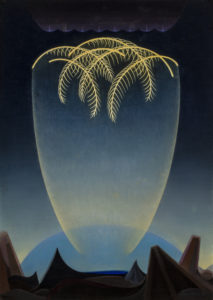 “The vibration of this light, the spaciousness of these skies enthralled me. I knew there was a spirit in nature as in everything else, but here in the desert it was an especially bright spirit.” (Agnes Pelton)