You are at:Home»Letters»The value of finding your own way
By sara genn June 14, 2019 Letters

If painting is like navigating, you might want to put down your phone. Neuroscientists at the University College London scanned the brains of London cabbies and discovered that the volume of their hippocamps — the part responsible for spatial memory, visualization and narrative — was larger than average. As possessors of “The Knowledge” — knowing by heart over 320 routes, 25,000 streets and 20,000 landmarks — London cabbies are said to have had an atlas of the city transplanted into their brains. The magic is that “The Knowledge,” unlike a smart phone algorithm offering every driver the same directions, allows the cabbie to create novel routes based on a mastery of experience and to retrace, tweak and embellish these routes over time.

In her 2019 book Wayfinding: The Science and Mystery of How Humans Navigate the World, scientific journalist Mara O’Connor proposes that as an open-ended exploration under our own power, navigation is a process that fires up our senses, feelings and motivations and connects us to the physical world. Getting lost, she says, is as important as knowing how to get somewhere, as the process of finding our own way builds cognitive and creative skills.

O’Connor says we use two basic strategies to navigate under our own steam. When we’re in a new city and need to find a place, we may ask for directions and then follow landmarks to get there. This is called the “spatial learning strategy,” where our hippocampus puts a pin in a memory spot and attaches a visual, a narrative or a feeling that can be retrieved later. Once we know where we are, we may then move over to the “caudate nucleus-dependent strategy” whereby we switch to a kind of autopilot that signals our brain to turn left or right in response to a cue we no longer have to think about or actively recall. This habit-style navigation lessens the cognitive load, which allows us to flesh out further benefits of the route, like resting spots or other resources — or even daydream.

Humans have been orienting themselves with stars, sand, snow, wind and waves with endless diversity — forever. Memory has been the unifying tool, regardless of environmental or geo-centric cues. Whatever our method of self-powered navigation, it comes from the same spot in our brains that creates stories about the past and future, which, to O’Connor, is a definer of humanity. When you snowmobile past a landmark on the Baffin Island tundra, she says, be like the Inuit hunter and turn around to study it from the other side to memorize its features from the new angle. Now added to your library of visual and emotional experience, your storytelling gains depth and turns locations into places of significance and connection, which is how you find your way.

PS: “Make voyages! Attempt them… there’s nothing else.” (Tennessee Williams)

Esoterica: O’Connor writes that the role of exploration, especially in children, is actually integral to the development of the hippocampus and explains why so many of us experience that phenomenon of “childhood amnesia.” Apparently, our memories of early childhood are spotty because our hippocamps had not yet developed. Studies show that by outsourcing navigation to external tools like Google maps and turn-by-turn GPS apps in our cars, the hippocampus goes a little quiet, crippling our ability to recall detail and gather nuanced information. Neuroscientists even have a name for it: “Digital Dementia.” Like a bicep that atrophies when held in a sling for too long, when we chronically neglect evolutionary endowed skills like memory and navigation, our hippocamps appear shrunken in the same way as the brain scans of people who suffer from depression, PTSD and Alzheimer’s Disease. The good news, says O’Connor, is that “this part of the brain is very plastic and can be affected by experience. It can be nourished.”

“To travel hopefully is a better thing than to arrive.” (Robert Louis Stevenson) 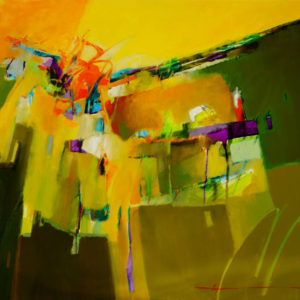 Neutrals enhance your paintings, edges provide sensuality color adds excitement and value holds the paintings together. Successfully combing these elements guarantees a painting that is dynamic.

Limited to 10 artists. This workshop will fill fast.