You are at:Home»Books»The Brain That Changes Itself: Stories of Personal Triumph from the Frontiers of Brain Science
By Sam Kaczur March 19, 2015 Books, Psychology, Science 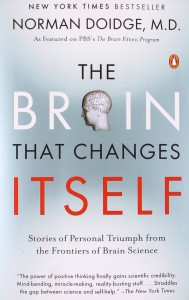 
An astonishing new science called “neuroplasticity” is overthrowing the centuries-old notion that the human brain is immutable. In this revolutionary look at the brain, psychiatrist and psychoanalyst Norman Doidge, M.D., provides an introduction to both the brilliant scientists championing neuroplasticity and the people whose lives they’ve transformed. From stroke patients learning to speak again to the remarkable case of a woman born with half a brain that rewired itself to work as a whole, The Brain That Changes Itself will permanently alter the way we look at our brains, human nature, and human potential.

“The author is both a research psychiatrist and a psychoanalyst who has interviewed many experts in the field. His book is full of well chosen and detailed stories about scientists and their discoveries as well as case reports of triumph over unbelievable adversity. There is also a good discussion of people who have remarkable abilities despite the absence of key regions of the brain.” — reviewed by Dr. Richard G. Petty.