You are at:Home»Letters»An oblique strategy
By ShawnA September 23, 2016 Letters

Acting on a tip, I downloaded from the app store a deck of imagination prompts. Originally created in 1975 by musician Brian Eno and painter Peter Schmidt, Oblique Strategies began as a box of index-sized cards for artists, made of cut up, discarded prints from Schmidt’s studio. Now, in 2016, the cards can arrive on your phone. I found them by following the breadcrumbs from a story in the New Yorker magazine describing a world-renowned food critic who sometimes emails his editor around deadline time to say that he’s forgotten how to write. For him, Eno and Schmidt’s “strategies” have been a go-to during moments of creative malaise. But what about deadlocks at the easel? The “strategies” include: 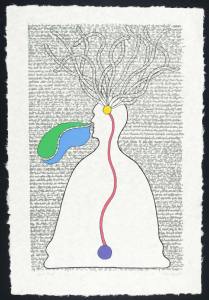 Use an old idea.
Are there sections? Consider transitions.
Honour thy error as a hidden intention.
Question the heroic approach.
Only one element of each kind.
Give way to your worst impulse.
What to increase? What to reduce?
Make a sudden, destructive unpredictable action; incorporate.
Do we need holes?
Decorate, decorate.
Disciplined self-indulgence.
From nothing to more nothing.
Ask your body.
Remove specifics and revert to ambiguities.
Take away the elements in order of apparent non-importance.
Consider different fading systems.
Tidy up.
Simply a matter of work.
Use fewer notes.
What would your closest friend do?
Courage! 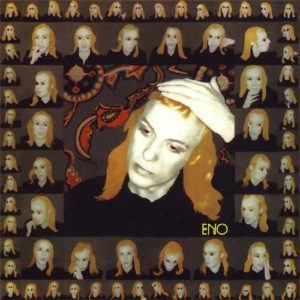 1974: one of 1500 different silk screen portraits of Brian Eno created by Peter Schmidt, four of which are used on the cover of the LP “Taking Tiger Mountain”

Used by the bands Coldplay, Phoenix, R.E.M, MGMT and by Eno himself when producing David Bowie’s 1977-1979 Berlin trilogy, the Oblique Strategies have, over the decades, taken on a kind of mythic ethos — inspiring second and third generation brainstorming card decks, comic books and the Richard Linklater film, Slacker. While, as artists, our dreamtime may already percolate in the abstract, a prod to shake up stagnant creativity patterns is always appreciated. Here’s an idea for our collective, lateral thinking cap: might we each contribute our own “oblique strategies” in the comments, below? 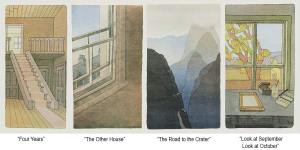 Esoterica: Coined in 1967 by psychologist Edward de Bono, “lateral thinking” approaches problem solving indirectly, instead of by the step-by-step “vertical” logic of deduction. By embracing the value of the fluidity of ideas, a lateral thinker can migrate from a known concept to a breakthrough by using four tools: Idea generating tools like Oblique Strategies that may help disrupt thinking routines; Focus tools like meditation or experiences that can help broaden where ideas come from; Harvest tools, which extract more value from new ideas; and Treatment tools, which honour real-world constraints like resources, support or other costs of an idea. “Look closely at the most embarrassing details and amplify.” (Brian Eno and Peter Schmidt, Oblique Strategies)

“They can be used as a pack, or by drawing a single card from the shuffled pack when a dilemma occurs in a working situation. In this case the card is trusted even if its appropriateness is quite unclear…” (from the introduction of Oblique Strategies, 2001 edition)