In Tim Burton’s 2014 film, Big Eyes, artist Margaret Keane stands with her paintings while a customer asks, “Are you the artist?” She pauses as if she may be reviewing her own existence. Her husband Walter, a realtor, has been passing off her work as his own. “I am,” says Walter. It’s the start of a 10-year bonanza, with Margaret painting for up to sixteen hours a day in a shuttered room while Walter hustles, promotes, makes prints, opens a gallery, goes on TV, canoodles with celebrities and secures a commission for the 1965 World’s Fair.​ 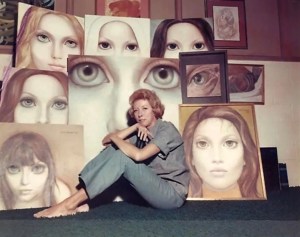 Margaret Keane says a brief period of deafness as a child made her focus on ‘the windows of the world.’

Margaret Ulbrich was a newly single mother in North Beach, San Francisco when she met Walter Keane at the local outdoor art fair in 1955. She was making dollar portraits while Walter sold his Montmartre street-scenes in the next booth. Soon Margaret and Walter married, and Margaret began to sign her paintings “Keane.” They struggled together to find a gallery, with Walter finagling a deal with local beatnik hotspot “The Hungry i” to set up shop in the club’s corridor. 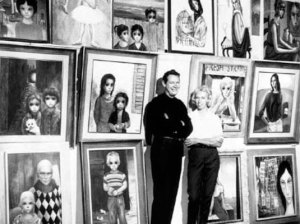 Margaret Keane had not planned on revealing the truth about her paintings, but in a 1970 interview it just sort of happened, she says.

Margaret was devastated when she discovered Walter taking credit for her paintings. “People don’t buy lady art,” he told her. She took their secret to her studio and let Walter work sales. Their popularity exploded. “While we were fighting this out at home, the paintings were just flying off the walls. Posters were selling. It was unbelievable. It snowballed overnight. I kept getting in deeper and deeper. I lost all respect for him and myself and lived in a nightmare.”

When Margaret eventually left Walter and revealed to the world that she was the real creator, he sued her. A judge ordered a paint-off in the courtroom, where Margaret handily executed her signature melancholy portrait of a doe-eyed waif in 53 minutes. Walter complained of a sore shoulder, and the court awarded Margaret $4 million in damages. 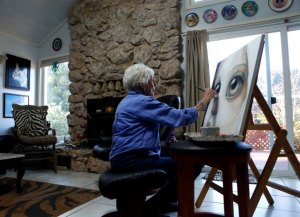 Margaret Keane at work in her Napa studio.

“Any blockhead can arrange a sublet. All I ever wanted was to support myself on art.” (Walter Keane in Tim Burton’s Big Eyes )

Esoterica: Margaret (and Walter) Keane’s “Big Eyes” were called, “the most popular art now being produced in the free world,” by Life Magazine in 1965. New York Times critic John Canaday described them at the time as, “the very definition of tasteless hack work,” and “sentimental kitsch.” Andy Warhol said, “It has to be good. If it were bad, so many people wouldn’t like it.” Margaret Keane is now 88 and lives in Napa, California. She paints daily. Walter Keane died in 2000 at the age of 85. He was never witnessed actually painting. 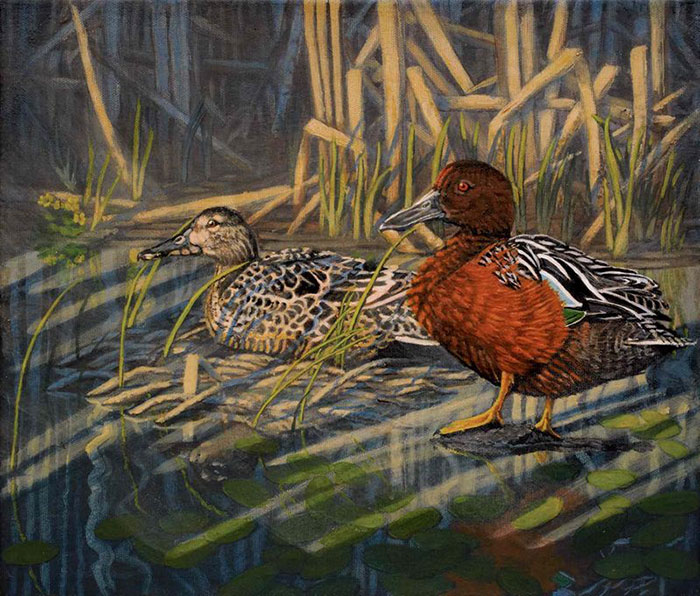