The last letter was a bit about money. This one is, too. The following is part of a letter from an artist to an architect friend: “I asked him for some of the money I need to continue my work. He told me to come around on Monday. I went on Monday, Tuesday, Wednesday, and Thursday and there was no money. On Friday someone else came to the door and threw me out. I’m discouraged about getting paid for this job.”

Sound familiar? The date on the letter is May 2, 1506. The artist was Michelangelo and the patron was Pope Julius II. The “job” was a three-story tomb with forty bronze and marble statues. Michelangelo never completed the job because he was never properly paid. Julius, who never got his big tomb, died. After two short-lived popes, Paul III, equally ambitious, took over. He got Mike to finish a ceiling. Then he told him to paint the end wall. This is the Sistine Chapel we’re talking about. Virtually a prisoner for four years, Mike applied what Thomas Craven called, “the compacted fury of twenty years in which the artist’s vision compromised with the world of fact.” This job was “The Last Judgment.” It’s been called “the greatest single work of art that man has ever produced.”

We artists are often asked to do something along the lines of somebody else’s ideas. If the subject matter turns your crank, I recommend that you should say “yes.” You should never say “when.” Commissions tend to bend your mind into dimensions where you may not at first be prepared to go. This is good for you. If the job or the patron starts to make you angry you should pretend the job is for someone else. Even for some higher power. Popes are only popes but art is pretty darned permanent. And another thing, it doesn’t matter who you’re dealing with, get a decent deposit.

PS: “Poets and painters have the power to dare, I mean to dare to do whatever they may approve of.” (Michelangelo) “Art is made noble and religious by the mind producing it.” (Michelangelo)

Esoterica: The pope wanted The Last Judgment to be done in oils. Mike thought it would be better in fresco. “Michelangelo did not say either yes or no. He did not lift a finger for several months. He let it be known around and about that oils were suitable only for women, the rich and the slothful. He quietly had everything plastered over in preparation for fresco, and then Michelangelo set to work.” (Giorgio Vasari) 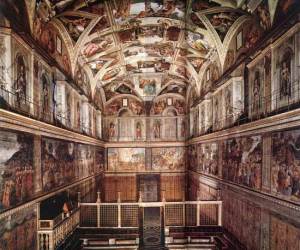 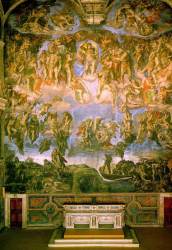 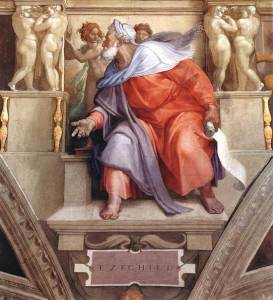 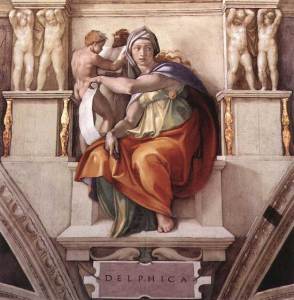 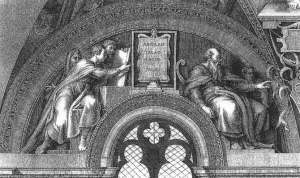 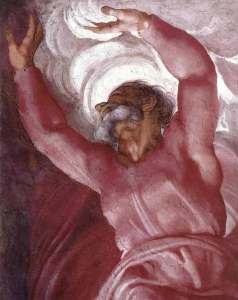 Separation of Light from Darkness (detail) 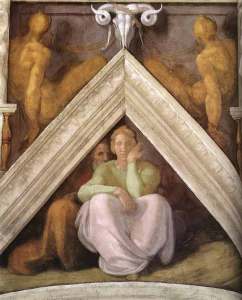 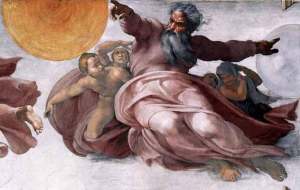 “Creation of the Sun, Moon, and Plants” (detail) 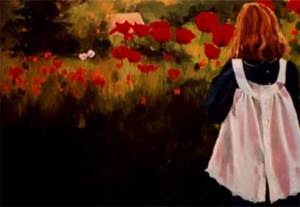 Your letter is very timely. I just received the second NSF fund notice from a bank re: a cheque sent to me for $500 towards a $2000 commission. You should add ‘Make sure the cheque clears before starting the commission.’ Fortunately I had only primed the canvas and needless to say all work has stopped. This was from the daughter of a good neighbour. Can’t trust anyone. 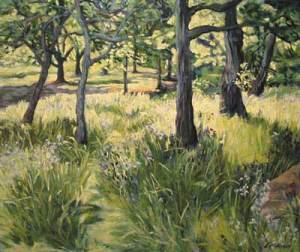 A collector told me that only about 1-2% of Canadians actually buy art. If we could expand that to 4%, we would have doubled the market. So, the problem is how to get the word out. People need to feel a home isn’t complete without some art and that a dried flower swag isn’t the same as a painting. A recent editorial in a regional newspaper advising people to invest in art and trust their eyes was certainly a start. Artists need to work as a group to promote art. Different people have different tastes and there is room for all of us — especially in an expanded market! 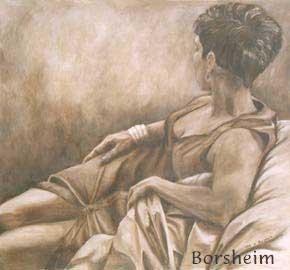 Rejection is hard to take at times, especially if you are working full-time at your art and Need to show to sell. It would be wonderful if jurors gave you an extra bonus of feedback even if it were in the form of a fill-in-the-blank checklist of standard reasons for rejection: slides not good, don’t like your subject/does not fit theme, technique needs improving, poor composition, etc. However, the most precise feedback I have ever received is looking at the actual exhibit from which I was rejected. It allowed me a chance to understand what the jurors were looking for and helped me understand (most of the time) why my work was not accepted. Sometimes I treat the rejection like a dare: “I’ll show you. Watch out because next time, I am going to blow you away with my work!” On one of my first shows entered, the director knew me and later told me that the composition of my sculpture did not ‘make sense’ to the jurors. The specific points of composition that they did not understand were decisions that I Consciously made. I looked at the work anew and decided that I truly Liked what I did (and why), so I ‘threw out’ the rejection of those jurors, and went on to find my own voice.

Re: Found my own voice
by Annette Waterbeek

Rejections are part of the process. If we all liked the same things this world would be very boring. Our favorite colors are different. Our favorite foods are different. We walk different. We talk different. But as Artists, we are alike… we love to create. I have never walked the walk of a juror. I love to see the interpretations of the works, but to be able to choose or not choose if a piece is to be part of a show — or the more difficult task of choosing awards — what responsibility, what power.

Place of surrender
by Suzanne Northcott 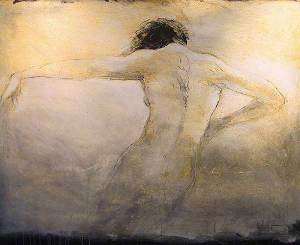 My painting process arises from a sense of faith in the source, the cultivating of receptivity and the entering of a place of surrender. I am also drawn to words and imagery as links between the material and subconscious world. I am always listening to these impulses and have the same sense of faith in their variety as part of the process. These thoughts are often the genesis of my paintings. When I stand in front of a new work I often have only a general idea of where it is going. Once I begin working I want to be in that place of surrender, led by the process, trusting that the imagery is wound into the same source.

I subscribe to your newsletter for nearly a year and read all those esoterica quotes you throw in at the bottom of your newsletter. Having been subliminally influenced over these last 12 months, I actually find myself telling my boss: I’ll take the 2/3 pay cut he threatens me with and follow my art rather than do work the he’s proposed for me, which I would hate. What’s up with that? What kind of fool am I? I actually decided I’d rather lose thousands upon thousands of dollars a year to avoid doing a job that is light years away from my bliss, just so I can play with color even though my decision puts me at poverty level. I can say, at 48 years of age, and for the first time ever, that I’d rather play with my life, than work at it?

My understanding is that copyright exists for all original works and it behooves the artist to keep enough of a record of creating the work to support their position in any copyright arguments that may arise. This record should also include any reference material, e.g. photos, sketches, etc. from which the work was derived and a photo of the work itself.

The rules are similar between Canada and the United States but not identical. There is an excellent article in the April 2001 issue of The Artist’s Magazine, page 66, entitled “copyright FAQs” and written by Joshua J. Kaufman, Esq, and Justin Pierce, Esq, both intellectual property attorneys in Washington, D.C. In it they answer the 10 most-often-asked questions about copyright. I believe that the magazine has its articles archived on their web site at www.artistsmagazine.com so that site is worth a visit. The article gives instructions on how and where to register a copyright and gives a forms download source at www.copyright.gov/forms/ which requires Adobe Acrobat Reader.

The authors of the article recommend that a copyright notifier be placed on the artwork, e.g. a “c” in a circle or the word “Copyright” or “Copr.,” each followed by a date and the artist’s name. The latter can be used with or without having registered the copyright. This notifier serves to “inform the world of your rights to the artwork” but defeats the concept of not dating the artist’s works. This and registration serve to enhance the protection afforded the artist.

However, it is my understanding that the artist retains the copyright to their images with or without the notifier and/or registration unless contractual arrangements are made to the contrary. In this instance the artist could avoid the dating and registration and trade the potential for an addition to the burden of proof if an infringement does occur.

Personally, I don’t bother registering my work as these copyright laws are diminished or simply do not exist in many countries where copies of an artwork could be produced and sold in volume.