You are at:Home»Letters»Haddon Sundblom
By ShawnA December 22, 2015 Letters

Kate Stanley of the Minneapolis Star Tribune has written, “His visits have marked the human story since its earliest chapters. He stands beyond the circle of civilization in gentle judgment, taking note of youthful struggle and triumph. He looks on as children strive to do right, to heed their elders, to earn a miracle. When the darkest moments loom and hopes are high, this visitor crosses the threshold before the dawn to leave a message. He brings possibility, astonishment and delight.” Kate is talking about Santa. 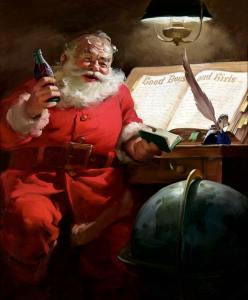 In 1931, The Coca-Cola Company commissioned Michigan-born illustrator Haddon Sundblom to develop advertising images using Santa Claus. Sundblom turned to Clement Clarke Moore’s 1822 poem, The Night Before Christmas. Moore’s description of the man as “chubby and plump, a right jolly old elf” led to an image of Santa that was warm and friendly, his face aglow with his sunny disposition. In the beginning, Sundblom painted the image using his neighbor, retired salesman Lou Prentiss as his model. Later, he looked in a mirror. For 35 years, Sundblom painted Coke-swigging portraits that defined the modern image of Santa. The buckled boots, baggy red trousers, big red coat trimmed at top and bottom in white fur, wide belt, white bushy beard and matching hat — all came out of Sundblom’s studio on the eighth floor of Chicago’s Wrigley Building. Today, when New York City interviews aspiring Santas, it goes by Sundblom’s standardized template. The story is beautifully told and illustrated in the 1992 book by Barbara Charles and J. R. Taylor — Dream of Santa: Haddon Sundblom’s Advertising Paintings for Christmas. 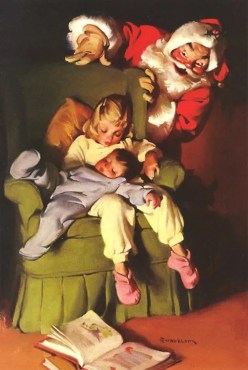 Haddon Sundblom (1899-1976) was Coke’s most prolific artist, painting subjects that ranged from bathing beauties to soda-fountain scenes. They are actively collected today. During his peak period in the 1940s, he produced half of all Coke’s advertising art — billboards, point-of-sale, the back cover of every December issue of The National Geographic. Partners in his studio reported that he worked quickly and often completed more than one painting in a sitting. Like many “deadline artists,” (and the “big guy” he was often painting) “Sunny” Sundblom could work all night. 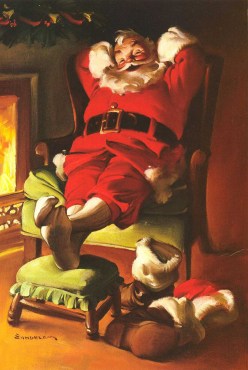 PS: “It was an unusual studio, where its members without conscious effort or charitable impulse — but rather with a spontaneous spirit of good will — inspired each other. It was where we learned that the best returns came from the mutual sharing of our various abilities.” (Haddon Sundblom)

This letter was originally published as “Haddon Sundblom” on December 24th, 2004.