You are at:Home»Letters»Overpainting
By ShawnA September 25, 2001 Letters

Deborah Worsfold of Toronto, Ontario wrote, “I have been painting five days a week since January. I’m represented by four galleries and had a solo this year. I can’t seem to stop overpainting. I’m supposed to be getting some work to the galleries and I can’t stop overpainting. Also I’m not selling at present although things are just barely set up. Three of the galleries are less than the summer old. One is waiting for its first shipment. What’s wrong? Why do I keep painting over? I cannot recall having the problem until last year when I got my first gallery. I got picked up last August. The galleries pursued me. Am I cracking under pressure? Should I get a job? At present I have a patron who will provide a small fund until next spring. That’s new to me. I usually do everything myself. How do I steady myself? Normally I am a keen and productive painter. Still am, except for the painting over. Have you run into this before?” 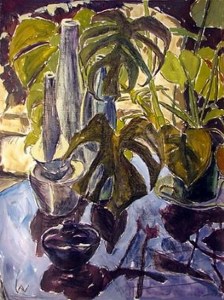 At my place “painting over” is just fine provided it doesn’t look like painting over. The problem you have of dragging things out is more serious however. Take a look below and see if anything might apply to you:

Fearing failure. Fearing success. Trying to give too much. Caving in to perfectionism. Allowing guilt to sabotage. Being stuck with a preconceived style or a barren muse. Acting out some form of compulsive behavior. And also, last but by no means least, the real and disheartening realization that the work itself is falling short of your personal expectations and that it’s unsatisfactory at the present time. This requires the marshalling of all of your resources, including rethinking your direction, reviewing methodologies and subject matter, and retreating to exercises and sketches, as well as new drawing, color or design strategies. By the way, it’s all part of an artist’s lot and comes with the territory.

PS: “There is nothing in a caterpillar that tells you it’s going to be a butterfly.” (Buckminster Fuller)

Esoterica: Accept change as necessary to the process. The real joy is changing your mind as you go along. Don’t panic. “When you’re finished changing, you’re finished.” (Ben Franklin)

Feel instead of think
by A J. Isbister

I’ve been in this situation where we overpaint or over-analyse. The answer for me has been to “feel” instead of thinking too much. It’s also important to paint for yourself and not for the galleries. Don’t ponder what the galleries or public want because you will never be satisfied, that is why you/we return to the work to change or ‘paint-over’ for others.

I can’t help adding a few comments to the subject of this letter – First of all ‘overpainting” used to be the obvious step after the “underpainting” – a process followed by the old masters and practiced by some artists even today. It’s interesting that you understood the term (in Deborah W.’s letter) to mean “overworking” a painting. Actually, I realize this was apparent in the context of the letter. I must say committing yourself to 4 or 5 galleries could make anyone frantic from the pressure. Oh for the good old days when an artist was taken on as part of a gallery’s “stable” and coddled and promoted and asked not to be with other galleries!

One of the most often asked questions is “When do you know when it’s finished?” or “How come your work doesn’t look overworked?” Well to the first question you could be smug and say “when the canvas is all filled in.” But really it is finished for me when I have made my visual statement. Also, I only allow one visit afterwards for any minor adjustments because I have galleries to keep happy and it doesn’t sell while it’s hanging around the studio.

To the second question, my work doesn’t look overworked because it is simply not. I do not try to achieve a highly polished piece because my style is to have a sense of the artist within the brushstrokes. Therefore the piece on close examination is loose but the appearance of detail is an illusion. The most detail is found at the compositional point of interest. Check out a some old world masters and you will be surprised to find that their works were not as tight as you thought them to be in art book reproductions. Paint loose, fast and free. You will enjoy your work more and it will become apparent in your finished pieces.

Many artists simply fear the idea of completing and use overworking as a way of locking up their work so that it becomes unmanageable. It’s just another method of sabotage. Put the stroke down and leave it alone is the best advice — and the repetition of this habit will overcome the unpleasant tendency that we all have in some degree.

It’s so hard not to be overcritical of oneself. It’s so hard not to compare your work to someone’s you admire and think it should be more like that. Going to my drawing, painting sketching group has been so helpful, because my fellow artists always point out to me the uniqueness and simplicity of my sketch style (which I always think is underdone). With a few well chosen strokes I seem to capture the essence of the scene and anything else I add (thinking it adds value) isn’t helpful but just detracts from the principal feature. I also have to learn that enough is enough and those years of drawing, painting, sketching are revealing a talent I have to let flourish.

I sometimes have that feeling of something taking over when I play the piano. I whip through whole books of Schubert sonatas, or Haydn, or Mozart, or play Chopin, without really doing much else than look at the pages and read them off with my fingers. It’s like a trance. I don’t think I’m a medium, but I think we all have the ability to tap into our subconscious if we just relax and allow it to take over. Maybe we’re talking about genetic traits or telepathy. This does just occasionally happen when I’m painting. Not often enough, and I haven’t been painting seriously for very long, but sometimes I look at a picture and can’t believe I painted it. At the moment I can turn the key to that secret door of that secret garden more often in music than in art. Maybe it takes perseverance and time. What do you think?

(RG note) I’m currently doing a workshop and can attest to the idea that some artists are lost in a creative world of their own. Even the repeating of their names fails at times to bring them to the reality of where they are. It’s been my observation that those who live for a time in this transcendent state are also reaching into the deep wells of their creativity. Sometimes a brushman’s brand of concert pitch is evident. Confidence fostered by simple mileage is a factor, and any form of negative self-esteem keeps it at a distance. Many artists also notice that the addition of music to the painting act aids and hastens the arrival of the desirable altered state.

I went through a period of having a lot of trouble controlling ‘overpainting.’ I realized that many times I was only executing alternatives and would have been more productive had I just painted another one in the different way. This would probably come under ‘trying to give too much.’ I’m still trying to overcome the barrier of stopping after the first one and going on to other things. I have a backlog of alternatives to execute. I just hope that the first choice is most often the better one.

In Tao of art only first stroke is acceptable. Workers try many times in order to get the right touch to the brush. There are more than three hundred ways of making a mark with a sumi. This must be the best that the artist has to offer. Any reworking or overpainting is not possible for this art.

More on “the groove”
by Jane Champagne, Southampton, Ontario, Canada

Your letter reminded me of a passage on page 14 in Silent Thunder, that wonderful book about the painter Toni Onley, by Roger Boulet (Cerebrus/Prentice Hall 1981), probably out of print by now but well worth a trip to the library. It explained to me how that blissful state happens, and how impossible it is to call it forth whenever you want to. It’s in a section explaining Sung dynasty ‘canons’ of excellence for painters. ‘Spirit resonance’ is a concept that is often difficult for Westerners to appreciate fully. It’s somewhat akin to capturing the Tao in art, the universal principle, nature itself, which includes the harmony of opposing forces, and could only be achieved through meditation and contemplation. Such a sense of harmony with the universe combined with proficiency on the technical level, also acquired through meditation, study and practice, was a prerequisite to artistic excellence” (my italics). Which, in my experience, leads to…the ‘groove,’ that blissful state where the painting paints itself.

More on channeling
by Jo Scott B

Finding the groove is what I refer to as “channeling.” A constant recurring comment from artists, call it what they may is this notion. To somehow let loose the bonds of everyday life, to close off the voices and let the creative spirit flow is the most rewarding side of creativity in any form. Authors speak of characters taking on their own life, musicians of notes flowing from space etc. Many times I start with a firm idea in mind. The end most successful results take their own direction. When I attempt to control it all, the paintings are stiff. Whilst this is puzzling, I have ceased to question. Gloriously happy and involved in the process of painting, I am fractious and ill at ease when this channeling eludes me. I do studio chores, sort through old work, prime canvas, clean up and gradually get drawn back to my easel.

Is it weather, music or events that ruffle one’s inner space? I have no idea. I have ceased to question and analyze my working methods, simply chastise myself when outside activities draw me away too long.

I have beside me a painting of a scene in Mexico that was coming along fine. Was. I overdid the foliage of 3 trees. Why? No excuse. I just did. I started to overpaint them. But that meant I had to repaint the scene behind them. So should I overpaint, or should I scrap the canvas and start the painting over again? Which will take less time? Which method will end up looking best? I liked the start of the first attempt. Will I like what I do if I start over?

Decisions, decisions. So I put it aside, and am finishing a scene of the Grand Canyon. This one is fun. Will I ever get back to the Mexico scene?