You are at:Home»Letters»The unanswered question
By clearmarble October 24, 2014 Letters
Dear Artist, In 1976 Leonard Bernstein lectured on art at Harvard University. “A work of art does not answer questions,” he said, “it provokes them.” He called his talk “The Unanswered Question,” borrowing his title from the 1908 symphony composed by American modernist Charles Ives. 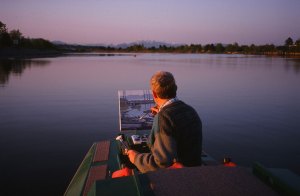 Robert Genn painting from his flat-bottomed scow, Alexander Mackenzie, on the Nicomekl River in British Columbia

I recently listened to Ives’ composition while driving Dad’s car in an autumn mist. The music poses a question in the form of trumpets playing from off-stage, floating on a bed of slow-building, polytonal strings. Ives called the horn melody “the perennial question of existence” — a meaty bone for a trip to the bakery but not inappropriate. If things got too pointed, I made a plan to answer with a raspberry Danish. A year has passed since my Dad was diagnosed with terminal cancer. I remember the wet autumn cedar needles tossed glossy orange on the driveway like punctuation marks. I’d flown from New York that same evening, and the following morning we set to work organizing the archive. It was Dad’s principal care. We sorted, culled, and toured a lifetime of paintings that had survived decades of studio comings and goings — personal work, special things, experiments and jewels stashed directly from the travel-box easel or suitcase. Now they are historical time-markers — cairns on an intimate pathway. We had a bonfire for the ones that wouldn’t make it, because that’s what you do when you want to leave your best. Dad, sharp and hands-on, set an intention for his paintings: care, love and sharing. And after his passing, some of his closest dealers proposed to honour this with a four-gallery exhibition. I quietly made a selection. Those months with Dad and the archive and our conversations over each painting are fresh in me. It was a privileged, solo journey. Early in his career, Charles Ives was proclaimed a prophet in his discovery and use of the now tenets of modern music, like polytonality and rhythms, dissonance, chance and space. People wondered if he consciously invented for the sake of newness, or if he was drawing upon something deeper. In art, which comes first? — the question or the creation of something that sets up the cosmic pondering? “What do I want to express? What is the thought behind the saying? What is my ideal, what is my objective? What? Why? Why? What?” wrote Emily Carr. As artists, we answer with our tools. By the virtue of our art, we again pose the question. Perhaps the answer is left for the ages. “For us, there is only the trying,” said T.S. Eliot. “The rest is not our business.” Sincerely, Sara PS: “But maybe music was not intended to satisfy the curious definiteness of man. Maybe it is better to hope that music may always be transcendental language in the most extravagant sense.” (Charles Ives) “Why talk when you can paint?” (Milton Avery) Esoterica: Honouring a Lifetime of Painting: Robert Genn (1936 – 2014) opens Saturday, October 25, 2014. The exhibition spans the early 1970s to 2014 and includes plein-air sketches from travels to the Canadian North, the Rocky Mountains, the West Coast of B.C., across Canada to Lake of the Woods, Ontario and beyond. There are pieces from a period in my girlhood when Dad painted me in a blue and white striped dress. What I remember most about those sessions was our un-tethered togetherness. The show also includes “heli-paintings” done on location from the plateaus of the Purcell Range and paintings done from the “Badge-easel” — the reclining chair my brother, James, fashioned for Dad in the last months of his life so he could continue to paint while lying down. These soulful dreamscapes the last incarnation of a spirit still enchanted by a good mystery.   [fbcomments url=”http://clicks.robertgenn.com/question.php”]  Featured Workshop: Tony van Hasselt