You are at:Home»Letters»Thoughts left visible
By clearmarble September 23, 2014 Letters
Dear Artist, The Van Gogh Museum in Amsterdam has an unfinished work by Lawrence Alma-Tadema: Three Sleeping Myenads after the dance, 1899. This one is particularly useful because it shows process.

Three semi-draped nudes are in varying degrees of finish. The flesh and face of one are virtually complete, while parts of the others are only indicated — a classic example of “commit and correct.” Loose and thinly painted notes of where and what appear here and there; some are only squiggles on the priming. An arm seems to have been shortened by a good 6 inches. Design elements, including the pattern on a rug, were laid in hastily for eye control. Alma-Tadema lets the painting itself indicate what’s needed. Even though some parts are finished, it’s not at all preconceived. One element, on nearing completion, suggests or begs the need for another. We not only see the artist’s technique, but also his sensibility. A decorative urn is sketched to cover an awkward breast. We also see the build-up to the possible reason why the work was aborted. These languorous female hedonists interact with one another in a highly sensuous manner, even in sleep. Perhaps Alma-Tadema, a highly successful and fashionable artist in his time, thought the painting was developing in altogether too risqué a manner for the delicate sensibilities of the Victorians. 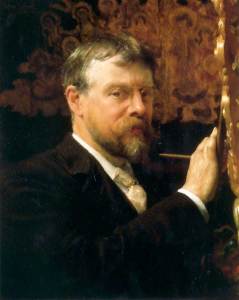 Not for that reason, I’m glad he didn’t finish it. Best regards, Robert PS: “Unfinished paintings are more admired than the finished because the artist’s actual thoughts are left visible.” (Pliny, AD 77) Esoterica: Tightening up is one of the scourges of the brush-worker’s art. Most of us find it easier to be loose and fresh at the beginning than in the middle or at the end. If you leave the tough stuff till last, which is human nature, you are more likely to tighten up as you move toward the finish. This letter was originally published as “Thoughts left visible” on November 26, 1999. Included in this letter is an excerpt from “Tough stuff first” published on September 14, 2007.   [fbcomments url=”http://clicks.robertgenn.com/thoughts-visible.php”]  Featured Workshop: Gloria Miller Allen