You are at:Home»Letters»Our parade of wonders
By clearmarble May 16, 2014 Letters
Dear Artist, Within easy walking distance of my studio is Crescent Park. When we’re at home, Dorothy and I go there in every season, nearly every day. I’m guessing the park is about a hundred acres and includes playing fields, a small lake and, for us, a labyrinth of forest pathways. We have a route, and Dorothy can be counted on to become agitated in places of previous canine encounters, historic squirrels, and other reinventions of her long nose. These pathways hold my memories as well — sights, understandings and minor epiphanies. When I revisit my parade of wonders I become anchored and focused. Measuring the seasons, new growth, old friends. This is where lines are written and scored, and paintings are laid out on the retina of the mind. While other folks may pass by and be a part of this space, I claim it as my own. 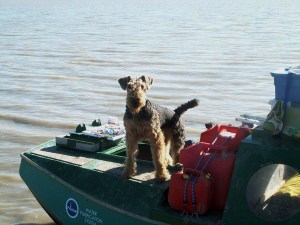 Dorothy (February 13, 2000 – May 13, 2014)
In 2002, Dorothy went the whole length of the Mackenzie River in Northern Canada. Here she is at the forward easel cockpit on the Alexander Mackenzie.

The cedar growing from the spruce The rock of sunning turtles The pond of great bullfrogs The tree of the barred owls The sunlit arbor with hanging moss The lover’s bridge with huckleberries The playground of laughing children The field of determined moles The daisies at the bench memorial The reedy verge of wood ducks The place of whispering cottonwoods The tree stumps red at sunset The view we sometimes paint The fungous musk of the fallen fir The feral snapdragons of the old cabin The ancient larch standing alone The ever-running brook A place can be quite ordinary and still be a special place. It’s all in the eye of the beholder. And shared history can magnify wonders — our children played and were painted on the great curved rocks that are now too overgrown to paint again. Now the swings and teeter-totters are for someone else’s tots. With the naming and claiming that artists tend to do, there’s a collection to be had. Like the haiku of titled paintings, they are the labels of our lives. By some miracle we are allowed on this path for a short while, and you can be sure when we are gone some like-minded ones will be there to take over. Best regards, Robert PS: “The world is so full of a number of things, that I’m sure we should all be as happy as kings.” (Robert Louis Stevenson) Esoterica: Some of the items we might put into our album are hard-won and require a bit of subterfuge. The tree of the barred owls, for example, is a wandering tree, for as far as I can see this species is seldom in the same spot twice. But these owls can be tracked down at certain times of the year. It’s a matter of listening for and going toward the distress calls of nesting robins and thrushes. Where these birds are found, an owl will be nearby, cat-like on a low branch, enduring the cacophony. Sometimes you have to go through something else to find what you are looking for. This letter was originally published as “A parade of wonders” on July 7, 2006. Note: Our Dorothy passed away peacefully on Tuesday, May 13th, 2014 at approximately 2:30pm. Despite renal insufficiency, arthritis, and other ailments that accompany old age, she showed up to the studio daily to offer her gentle nod of encouragement. She was 14 years, 3 months.   [fbcomments url=”http://clicks.robertgenn.com/wonders.php”]  Featured artist: Janice Mason Steeves