You are at:Home»Letters»Curiouser and curiouser
By sara genn March 16, 2021 Letters

This morning I was on the phone with a painter I’d Googled. He Googled me as we spoke. We looked at each other’s stuff. Then we mutually Googled the same works of the Spanish painter Joaquin Sorolla. We moved on to Francisco Domingo Marques, a teacher to whom Sorolla gave a lot of credit. This led to the less well-known Bernando Ferrandiz and Munoz Degrain, fellow Valencians who were also influences on Sorolla’s early work. They were great painters we had not previously heard of. We live in the fastest curve of democratic learning yet to occur. Search engines have the potential to revolutionize traditional systems of education. It is a wave of free thinking and awareness of alternates, a bonanza for the independently curious. Like the “Mind Mapping” concept developed by Tony Buzan, ideas and images flow naturally from one to another and form into an ever-expanding web. 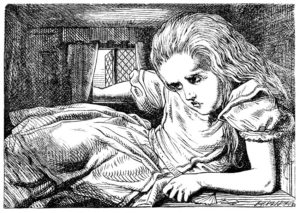 Alice crammed in Rabbit’s house, an illustration from Alice’s Adventures in Wonderland, 1865
engraving
by John Tenniel (1820-1914)

In his remarkable little book, Painting as a Pastime, Winston Churchill said, “I have always had a curious nature; I enjoy learning, but I dislike being taught.” Winston understood one of the basics of learning — self-direction — the way of the autodidact. He would have been proud to announce the triumph of independent curiosity. The giant online Wikipedia is currently about ten times larger than the tree-based Britannica. And it’s not the largest. That honour goes to the Hudong, founded in 2005 by Dr. Pan Haidong, with over 4 million articles and 2 million registered contributors. 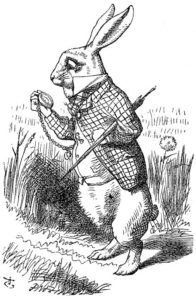 White Rabbit checks his watch, an illustration from Alice’s Adventures in Wonderland, 1865
engraving
by John Tenniel

Since its inception in 1967, the American magazine Psychology Today makes a pile of magazines about 20 feet high. You can mouse every one of its mind-benders. If you happen to be thinking about creativity, for example, try Googling any of the following: “What do creative people look like?” “Stimulating imagination through constraints.” “Painting and praying.” “Being nice to yourself increases creativity.” “Get creative, lose weight.” “Hobbies — the personal path to creativity.” “Are conservatives less creative than liberals?” “Can fundamentalists be creative?” And so it goes. On and on. This is the time of the curious. And it all comes through a tiny line or out of thin air to find us in our homes, offices and studios. “Curiouser and curiouser,” cried Alice. 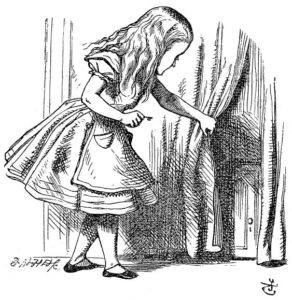 Alice finds a tiny door behind the curtain, an illustration from
Alice’s Adventures in Wonderland, 1865
engraving
by John Tenniel

Esoterica: After talking with my new friend and fellow traveller, I wandered to my easel. It was still early. The cars on the distant highway were tiny lights moving toward the big city. The laptop beside my palette sprang to life when I touched it, producing a sharp image of last summer’s rugged mountain climb. “Is this a dream?” I wondered. Somewhere around 1830, a British Lord, seeing an early steam engine, declared, “This is not good; now the common people will be able to move around at will.” I picked up my brush. “This is good,” I thought, “now the common people can go anywhere their curiosity takes them.”

This letter was originally published as “Curiouser and curiouser” on March 26, 2010. 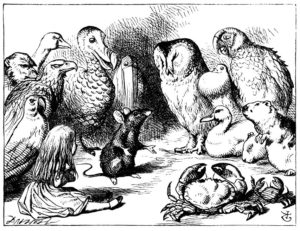 Mouse Tells a story to bird, an illustration from
Alice’s Adventures in Wonderland, 1865
engraving
by John Tenniel

“When I used to read fairy tales, I fancied that kind of thing never happened, and now here I am in the middle of one!” (from Alice’s Adventures in Wonderland by Lewis Carroll)