Among my mother’s personal things that were left in her room was an old sewing box. Attached to the lid was a hand-written note: “Dear Sara, Your dad gave me this sewing box in 1951. He brought it back from a trip to the Okanagan when he was 15. I have used it ever since. It is yours now. Love, Grandma.” Opening it up, Sara found spools of thread, scissors, a thimble, measuring tape, knitting-needle counters, buttons, fasteners, needles in black paper packages, pins, bits of lace.

One of the findings that surprised me in our recent survey of “Nurture vs. Nature” was the input of grandparents. Time and again artists mentioned support and encouragement from folks beyond mom and dad. It all became pretty clear when I stood back and really looked at those statistics. Parents may have expectations and desires for their kids, but grandparents are often better able to honour and enthuse. By your letters and survey responses, it also seems this goes for aunts, uncles, cousins as well as friends of the family. For the developing artist, these folks can be treasures. I could see from many of the comments that artists did well when they were sensitive and open to their wider families, if only for the fact that they didn’t carry the same baggage as parents. And for those artists who held to the idea that genius and inclination might be inherited, and there were a few, there’s the idea that talent tends to jump the generations. Many reported that it was simply valuable to have a second opinion beyond what some found to be a toxic environment. “A lot of my character came from my grandparents,” said one artist. Conclusion: Whatever’s going on, good or bad, invite the grand-folks.

I remember Grandma and Grandpa attending Sara’s first solo show. I remember how they bought, yep, bought from that art dealer, one of Sara’s first paintings. I remember them looking at the painting, wondering if the frame might be suitable. I remember it all wrapped up and under my dad’s arm, going home with them after that memorable night. Later, I remember first seeing it hanging in their hallway. It’s still there.

PS: “Correction does much, but encouragement does more.” (Johann Wolfgang von Goethe)

Esoterica: What a wonder is the internet. Questions are posed one day, answered by thousands the following day, then results are tabulated and published the next. And these are not just statistics — they’re living, breathing snapshots of what makes us tick. They’re timely facets of humanity — how we grow, struggle, overcome. Our studio computers are like sewing boxes that regularly open up and give small but important items of information and inspiration. And the greatest gift from this box is the understanding that we are not alone. 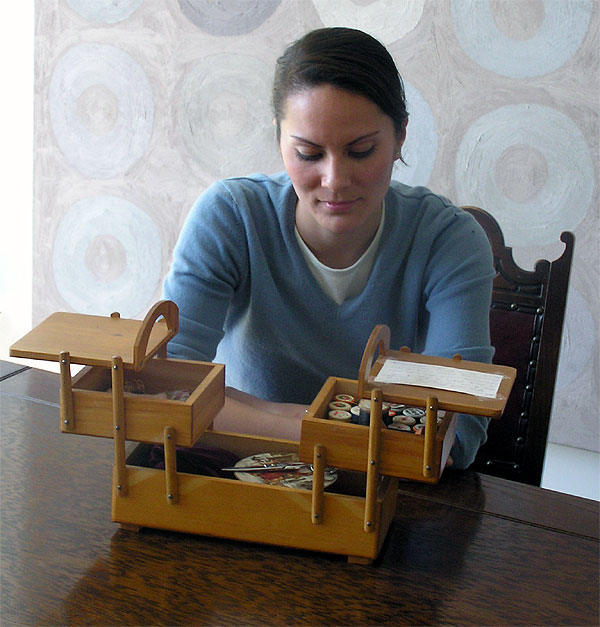 Pass on the encouragement
by Joyce Madden

My first grandchild, Farleigh, is an artist. Now six, her art never ceases to amaze me. She is so natural, doing the art for the sheer love of it, without consideration of a viewer’s judgment. I love that grandparents have powerfully impacted so many. My goal is to be a positive and enthusiastic supporter for my grandchildren and a role model for my artist granddaughter. Of course, I’m finding that the reverse is true and Farleigh is actually my role model.

My father encouraged his sons, took them to the shop etc. One of my brothers is highly creative and holds several patents. My sister and I were just expected to marry well. It was my uncle who applauded my writing, and my aunt and older cousin who helped me to paint. This cousin is still one of my most valued fans. Among my other cousins I can count seven more visual artists.

“King of the Mountain”
acrylic on canvasboard, 11 x 14 inches
by Brad Greek

It was Aunt Betty, my dad’s only sister who encouraged my talent from a very early age. She was my first art buyer and was the first to commission me for a piece. I was in my early teens. It was her interest and encouragement that kept my drive alive. She and my grandma, who lived together most of their lives, had collected many pieces over the years. Both are long since passed. I still have part of their collection today.

My dad seemed to have stepped up to the plate after them. He, and my mom too, has a collection of my work and has some creativity of his own. I remember at an early age, Dad building sculptures out of pipe cleaners and customizing motorcycle helmets, expanding later to leatherworking, jewelry-making and steelwork of making knives and hatchets, etc. The only artist up my family tree that I know of comes from my mom’s side. My grandma’s brother was a painter and sculptor.

Support from aunt and uncle
by Ron Warnock

One aunt and uncle, upon having to enter a nursing home, hung 14 pieces of my work on their walls, most purchased with 3 or 4 gifts from me to them. Their attendance and encouragement was there right from my very first exhibit, even more so than my parents.

When I clicked to see the responses to the letter about your mother I saw the photo of Sara looking into her grandmother’s sewing box. How poignant that the image of the painting on the wall behind Sara echoed the spools of thread in the sewing box. This image supports the notion of grandparents’ influence in our lives.

The paint box
by Moiya Wright, Ottawa, ON, Canada

I found a box in my mother’s belongings when she died. It was a small, leather-covered box and it contained lovely old ivory-handled items with which to make lace. There was even a small piece of unfinished lace, yellow with age. My father said that the box had been my grandmother’s. I also found a well used old paint box and brushes, wrapped up and hidden away — my mother’s? I never saw her painting.

I would be grateful if you would address the subject of lines in a composition. I really like the effect of the drawing showing through the painting but I don’t know the theory or rationale behind it. I have seen some illustrations of early 19th century paintings which have thick black lines around shapes, but this is not the same thing.

(RG note) Outlining as afterthought is a stiff but effective way of pulling weak work together. The real joy of line, and I think your understanding of it, is where the line is in fact the act of finding the line. This is a dynamic approach that helps an artist to see. It also has the effect of smoothing out those fumbling lines that are the first resources of discovery. A thin, arbitrary line, when “found” can be reinforced with other media. These lines have appeal because they show the thinking of the artist.

Something out there
by Christine, UK

I have often wondered about morphic fields. I’m a doctor and it quite often happens that I think about one of my patients that I haven’t seen for a while. And then that day or the next day or two, that person turns up. Also I seem to see more people with disturbed mental processes around the time of the full moon. It would be good if their increased mental energy could be channeled into a positive creative process.

(RG note) With our recent survey on Nature vs. Nurture, it put me in mind that we could pull off all kinds of experiments — scientifically handled of course. Like keeping track of how much and how well we create during a full moon. Has this survey ever been done before?

That includes Florence who “inherited a similar sewing box from my mother in 1957. She died very suddenly just before her December birthday that year. I’ve treasured (and used) her sewing box over the years and value it even more as time goes by. I shall put a note inside it as Sara’s grandmother did!” and Marilyn Bonnett who wrote, “Two years ago, my mom passed away. I kept thinking, I am now an orphan. My grief was turned to joy when a month later a workshop in Belleville with Guttorn Otto came up. Getting in touch with nature and again painting soothed me.”