You are at:Home»Letters»A walk with Renoir
By ShawnA February 2, 2016 Letters

Not many hikers are on the Grand Randonnee in the Cevennes this time of year. You’d think in a country the size of France the public footpaths would always be busy. But no one is around, save a few mushroom-gatherers quietly moving in the undergrowth. My hiking companion, Pierre-Auguste Renoir, has just turned 166, but he keeps right up with me. He’s great company and has an opinion on everything. 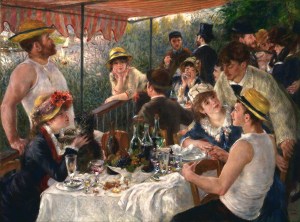 “If a painting is not a pleasure to me I will certainly not do it,” he says. He seems not to want to stop until he feels the pleasure coming on — then he announces “Here.” “You learn about painting,” he says, “not by looking at nature, but by looking at your painting.” Renoir is a walking encyclopedia — music, politics, history, the plight of the poor, oppression, freedom, religion and, of course, painting. Squeezing out paint, he says, “Pissarro has written that you must banish black from your palette as a useless colour. I’ve found it’s only with black you can infuse lightness into your painting. Titian said a great painter is one who can use black, and I would rather take Titian’s advice than Pissarro’s.” He laments we cannot yet take music freely with us into the field. “It must be difficult with the violin,” he says, “just as it is in painting, to find the right tone straight off.” 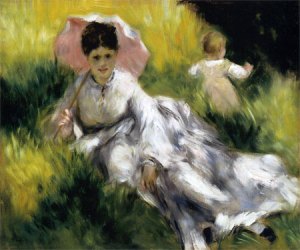 Renoir works in a distinctly fuzzy manner. He looks at my painting in dismay. “Too hard,” he says. Renoir’s arthritic hands are an impediment, but he keeps smiling. “The pain passes, but the beauty remains,” he says. We move on to politics. “Socialism is doing so much evil,” he says. “It has deprived people, particularly the workers, of religion, which was such a consolation to them. A working man isn’t any happier with fewer working hours, for a man with no work gets up to no good.” We both agree that bars are bad. “Work should be its own reward,” he goes on, “and the only reward one should offer an artist is to buy his work.” Not meaning any malice, I tell him his painting is particularly pretty. “Why shouldn’t art be pretty?” he says, “There are enough unpleasant things in the world.”

It’s getting dark and distinctly colder. A half kilometer farther on, in the village of Chasserades, there’s a small hotel. We can warm up in there. We’re looking for a country stew or a cassoulet, and a bottle of vin du pays at the bar. Tomorrow will be another day. 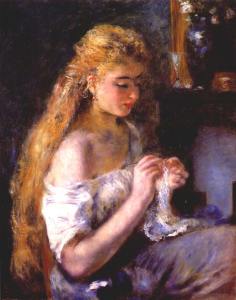 “A Girl Crocheting”
oil on canvas 1875
by Pierre-Auguste Renoir

Esoterica: A good book to take with you when hiking in France is The Impressionists at First Hand, edited by Bernard Denvir. In it are excerpts from the journal of Julie Morisot (Manet), Berthe Morisot ‘s teenage daughter, who also happened to be Edouard Manet’s niece. Julie kept remarkable, insightful records on some of the Impressionists, including Renoir, whom she particularly admired. Most of these quotes are verbatim from Julie’s journal. I’m just a bit in love with Julie, too. Unfortunately, her delightful journal ceases after her marriage to one of Degas’ students.

This letter was originally published as “A walk with Renoir” on December 19, 2006.