You are at:Home»Letters»Dream Factory
By ShawnA November 15, 2016 Letters 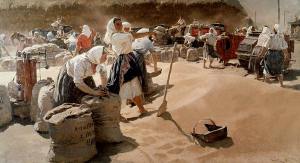 Smiling commissars, noble warriors, beefy sportswomen, the glow of sweat, marching youth, the joy of hard work — as well as the tender humility of country life. Misguided politics and artists in the employ of the state to make Stalin look like a good guy — art in the service of an idea.

These folks knew what they were doing. Counterlight, reflected light, backlight, brilliant patterny compositions both interior and exterior. And all this often in a broad and painterly style. “Unforgettable Encounter,” for example, is a complex figure piece by Wassilij Jefanow that shows a glowing young woman giving flowers to Stalin. Each of the twenty-odd faces are an accurate, smiling portrait, old and young, wise and common, men and women, all hands caught in the act of clapping. 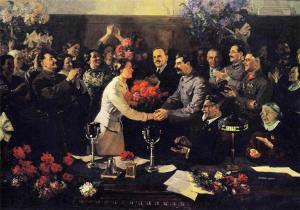 But it is Tatjana Jablonskaja’s painting “Bread,” that takes your breath away. High-key, atmospheric groupings of women shovelling grain, threshing, loading trucks. Strong design and heroic sweep are made all the more precious by red isolation, luminous greys and dazzling auras around white garments. These barefoot amazons wade in golden grain — everything gilded in reflected light through the dust and blessed with an education in pictorial composition. 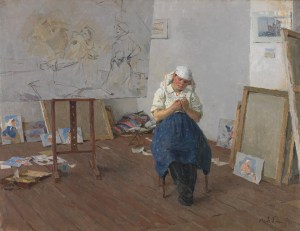 PS: “Jablonskaja received her second Stalin Prize in 1951, the title Distinguished Artist of the Ukrainian SSR, Order of the Red Banner of Labour, the State Prize of the USSR, 1979. In 1975 she is made a full member of the Academy of Fine Arts of the USSR.” (Boris Gloys, Max Hollein)

Esoterica: Next door there’s a much-travelled exhibition of Hitler-era work of German expressionist Paul Klee. These are wispy, mainly pencil drawings pasted into imposing frames, dreamy, yes, but of one who was able to make subtle protest of the tragedies he foresaw. A great contrast of rye ego against the others in the Soviet block who perhaps had little, but were nevertheless party to a dream.

This letter was originally published as “Dream Factory” on November 4, 2003.

“To emphasize only the beautiful seems to me to be like a mathematical system that only concerns itself with positive numbers.” (Paul Klee)