One of the interesting things about Ed Hughes is the deal he cut with his dealer in 1953. The dealer was Max Stern of Montreal’s Dominion Gallery. Ed lived in a bungalow on the west coast of Canada. Ed and Max met only four times. Their deal was done by mail. Ed’s deal was this: “I’ll give you everything I make and you pay me a salary.” Ed was a pretty slow worker — about a dozen paintings a year during his good years. Gradually, his annual salary edged up. Then a new Jaguar was thrown in for good measure. Ed insisted on that. He liked the classics. In the meantime Max took control of Ed’s output. He took advantage of the natural shortage to create a demand. He placed Ed’s work into good hands. Prices went up. Two collectors bought most of his major output — about fifty canvases each. These two guys are the ones who reached into their pockets to pay for a spectacular coffee table book. This led to an important retrospective in a major public gallery. Ed stayed home — didn’t like arty crowds. He liked his paintings to speak for themselves.

Sitting on his vintage chesterfield, doilies on the arms, a faded Vermeer poster tacked up behind, Ed’s gluing together one of his plastic model cars. It’s his hobby. Rolls Royce. Bugatti. Packard. Over there, his studio door is open. It’s a spare room, small, fluorescent, can’t be used at night because of the light. There is only one painting in there and he’s been working on this one for two months. In order to view it properly he has to stand in the closet. “Maybe you notice something about that painting,” he says. “No crows. Since my wife died I haven’t put a single crow in a painting.” 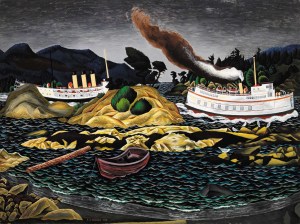 Over at the retrospective, everybody will be quite happy by now. The curator will probably phone later. “Can you imagine the prices they’re getting for my work these days?” Ed asks. I hand him his glue. Ed will stay up until eleven and then take the phone off the hook.

PS: “The main reason I’m not going to the opening is the worrying. I’d worry so much I couldn’t concentrate on my present painting.” (E. J. Hughes) 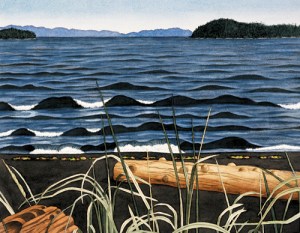 “The Beach at Savary Island”
1998 watercolour by E.J. Hughes

Esoterica: Curator Ian Thom said, “Hughes is an artist who thinks through his canvases with an obsessive level of detail. But his extreme depth of focus, his bright colours and the curiously lucid quality of his painted atmosphere brings to Hughes’ work the very accessibility for which he was reaching.” 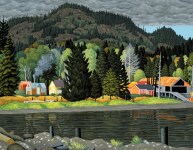 “Unfortunately, when I start to talk or when someone watches over my shoulders, my pencil either stops or I draw meaningless lines.” (E. J. Hughes)