I’m writing this letter from the location of the old railway station at Lake O’Hara in Canada’s Rocky Mountains. This is where John Singer Sargent, the subject of my last letter, got off the train in 1916. Your responses indicate there is a lot of curiosity about this artist. Today, Sara and I are going to look around and see if we can find a couple of the locations he painted. We’ve been talking about Sargent all weekend. Here are a few of Sargent’s early influences: 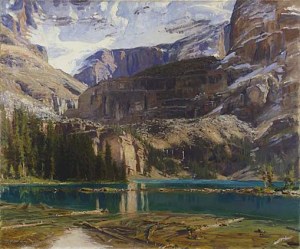 An easy-going and somewhat aloof father.
A supportive, culturally aware mother who also painted.
An unorthodox upbringing with a variety of experiences.
Travel and adventure at an early age.
A family with a degree of financial independence.
A family that valued culture, civilization, and society.
Early success, even as a child.
The capacity for imitation as an acceptable activity.
A sense of decency and modest self-esteem.
The ability to make and keep friends among superior people.
The ability to balance socializing with private time.
An acceptance of the value and virtue of dedicated work.
The habit of persistence to get what he wanted.
A sense of values outside the standards of society.

The last assertion may surprise you. Keep in mind that in later life he turned down a knighthood, the Presidency of the Royal Academy, and the request to do the official portrait of the King of England. He also suddenly stopped taking lucrative portrait commissions in order to pursue his own directions.

With regard to imitation his admiration of Velasquez is well known. In the academy of Carolus-Duran he appropriated the master’s style within weeks. He sometimes painted “in the style of Monet,” and from time to time painted “off style” in order, I think, to see if he could do that too.

Esoterica: In his portraits of Elenora Duse, Lady Sackville-West, and others, Sargent made many attempts to produce the effect he wanted, and rejected all. “He needed several chances to arrive at spontaneity.” (Carter Ratcliff)

Sargent had an excellent support system. He was encouraged and even groomed for his preeminent position in the world of art. By being featured and admired at an early age he was able to show off and develop his facility and magical technique — and they became a self-fulfilling prophesy. We should all be so lucky.

(RG note) And yet I have known many artists who do well in spite of depreciation and discouragement at home or at school. I don’t know where character comes from but there are some who take an “I’ll show you” attitude and end up surprising everybody. It’s been my observation that prowess comes from either love or anger. And anger can be quite effective.

Sargent was an upwardly mobile social climber. His mother led the way. He went to great pains to “make and keep friends among superior people.” This should read — “wealthy and titled people.”

(RG note) And yet he befriended intellectuals like Henry James, Robert Louiis Stevenson, whom he admired, and kept childhood friends like Vernon Lee, all of whom he painted for free at one time or another. Also, and most charmingly, he painted his close artist friends in the act of doing what he loved best — painting. Perhaps no painter in history painted so many paintings of ordinary friends painting.

You mention that Sargent sometimes painted ‘in the style of Monet,’ which at that time had not yet been born. Monet’s style was the culmination of historical art movements which had to precede it in order to achieve it.

(RG note) Monet and Sargent painted together at Giverny in 1887. The two artists died one year apart. Looser paintings by Sargent such as Claude Monet Painting at the Edge of a Wood (Tate Gallery, London http://www.tate.org.uk/servlet/AWork?id=12734) show the influence of the older artist at that time.

I have an opening in May and am working like crazy to get ready for it and I find “several chances to arrive at spontaneity” so appropriate! I am a printmaker and am doing all monotypes for this show and they are very spontaneous, but it does sometimes take me 5 or 6 tries to get there! I am using everyday items for inspiration this time, calling the show extra-ordinary!

Your reader, Elsha Leventis, said that ‘Leo and Aires dominated the scene for artists.’ Do they? This is interesting. In my observation, (I am an art teacher and I have been collecting birthdates of my students for years) Aquarius and Pisces have predominated my rolls. It would be most interesting to see the responses of your readers as to their birth signs. This information might make for a very interesting column indeed.

(RG note) I wondered about that too. As you may guess I have a fair degree of skepticism about the date of birth being related to various personal characteristics. Having said that I realize there are lots of folks who take the zodiac seriously. I also think there is a big difference between people who take art courses and people who succeed and excel in it. It’s like comparing tennis players with championship tennis players. If there is enough interest we can do a horoscope survey — but I would ask for categories:

If you don’t mind categorizing yourself please feel free to send along your sign and we will collate them over the next few weeks. Also, if you have the information, I think it might be useful if you indicated your brain tendency as right, left, or center. We will report back to you when we have enough to make the survey worthwhile. You might consider inviting your artist friends to participate as well. All you need to do is send the basic information to rgenn@saraphina.com We’ll keep it anonymous. Mine looks like this:

I was a little surprised by the responder who said he equated mathematics with left brain activity. I always viewed mathematics as simply determining/seeking the relationship between things — like spatial thinking — and therefore assumed it was a right-brained activity. I certainly use geometry (and fractions) in my artwork. Also, I have heard that when elementary schools include art programs in the curriculum, children do better with math.

I used to do mural projects with high school kids. The group would create a design on paper and transfer the image to the wall. There were students of all levels of talent and commitment, so I had to use a fail-safe system for success. I would have one of the more careful students draw felt pen lines around the shapes that were to be painted in. This created a kind of paint by number approach to murals and it helped the image to really stand out without worrying about pushing values or colours that we did not have. The only problem with this approach was if you ever wanted to cover up the painting after (even years after) the felt pen would leach through the new layers of paint to show the old shapes underneath.

Can you imagine how horrified I was when I saw you pull out a black felt pen to sign the back of the acrylic painting that I had just purchased from your show! I have had nightmares thinking about the painting that would be passed down for generations in my family slowly developing shadows from the words that you wrote decades before.

(RG note) I’ve often wondered about that. I’ve been writing on the back of canvas paintings with Sharpie and other fugitive (permanent) ink pens for about thirty years and have never had a report of the black ink coming through the priming. Has anyone? Other than the situation on the front side? Once I painted a picture for a friend on the original convertible roof of an old car (’36 Bentley) and material written on the back crept and spoiled the painting. It was an oilcloth type canvas, unprimed.

Learn to say “no”
by William, Georgetown, Ontario, Canada

We moved into this new home with a great studio almost one year ago. I was busy when I moved and busy now. An example was getting up and into the studio Saturday morning at eight, I took very little time for eating and coffee, and finished around midnight. This is doing watercolour renderings of baseball uniforms. I slipped in a drawing of a housing development, did critiques on student drawings for Monday evening etc. etc. etc. I now have a chance to start an art school which I am still thinking about, but need to put together figures, schedule etc. I have more teams to do and that will take until at least October, and I just signed up for a trade show. Now I need handouts, promotions etc. Since I am in my last year of my 50s, when do I get a chance to paint? I guess I just have wishful thinking of the day that I learn to say “no.”

The places of our lives
by Sharon Hubbard

A few years ago I had the privilege to be on the last bus into Lake O’Hara. I painted and photographed my way around the lake in glorious pristine clarity. Beautiful autumn gold reflections in turquoise waters. I have a photo of a Whiskey Jack (Canada Jay) on my watercolor palette checking out the bright colors. Out of concern for the birds I gave them some apple instead. I had some people stop by as I was painting. They thought I was part of a meditation group using the cabins. No, I was just doing my usual and enjoying every minute. Today I was out boating to photograph sea lions and scenics. It was sunny with cumulous clouds, blue, blue skies and many critters and birds. I do photography a lot on Vancouver Island.

And so, if our path is not to be somewhat off the beaten one, then where do we go after all? To do more Monet? Pinks and greens and pastel yellow? After a time, even the water lilies must die. And so where then is the new generation?

You may be interested to know that artists from 81 countries have visited these sites since January 1, 2001.

That includes Arlette Steenmans of Puimichel, France, who is painting watercolors of the lavender fields.

And Suat Ozyonum of Turkey who is currently painting women with a minimum of stroking.

And Linda C. Gardiner who is a post-graduate student currently researching art on the Internet for her MSc dissertation in Information and Library Studies at Strathclyde University. (Glasgow, Scotland) She has a questionnaire for artists, and will send it to you if you would like to participate.