You are at:Home»Letters»Lunar artist
By ShawnA November 18, 2016 Letters

While most of us are tempted to stay and fight for our planet, there may be an opening for artists on the moon. NASA and others are doubling down on plans for Mars, but futurists at the European Space Agency are focused on a lunar colony and, with it, art. 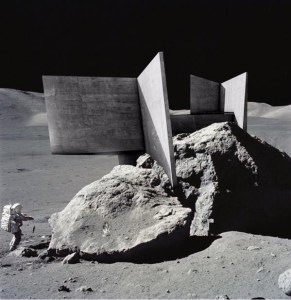 The idea is that while scientists figure out how to breathe in outer space, artists can tackle the more nuanced details. To tap into planet Earth’s broader imaginations, the European Space Agency’s Advanced Concepts Team posted a call to artists and has awarded a residency to Spaniard Jorge Manes Rubio. Rubio is a collector and interpreter of cultural artifacts and an anthropologist of lost objects. A re-imaginer of worlds, Rubio’s moon could be but another canvas on which to re-construct and re-imagine the talismans of our earthliness.

For his residency, Rubio has been given a science mentor at the European Space Research and Technology Centre in Noordwijk, Netherlands, where he can study the space program. After this, he’s headed over to the Ars Electronica, a centre for electronic arts in Linz, Austria, where he can dream up lunar possibilities. So far, his wonderings have zoomed in on the most basic cultural articles of existence. “When somebody dies on the moon — because eventually it will happen — what kind of burial will they receive?” he asks. “What kind of sculpture or object are you going to make to remember them?” And committing to interstellar life: “When somebody’s born for the first time outside of Earth, what kind of culture are you going to transmit to this person?” 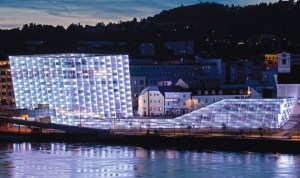 “The Ars Electronica” or “Museum of the Future” in Linz, Austria, designed by Treusch Architecture ZT GmbH, 2009

PS: “Art and scientific research are often driven by a similar spirit: investigating the nature of our being in the world, pushing boundaries in knowledge and technology, venturing into the domain of the unexplored.” (from the Call to Artists, by The European Space Agency Advanced Concepts Team)

“Trees are poems that earth writes upon the sky, / We fell them down and turn them into paper, / That we may record our emptiness.” (Kahlil Gibran)

Esoterica: For his first piece, Rubio has designed a kind of temple for the acknowledgement of life, death and the human struggle called, Peak of Eternal Light. While he’s vague about its religiousness, the structure hints at the primitive, spiritual houses of Earth’s previous millennia. And though he’s not been asked for the “how” of his idea, he proposes the Peak be made out of a 3D printable lunar regolith — the composite dirt found all over the moon’s surface — for practical reasons. Right now, he’s testing his 3D printing idea at the Ars Electronica with Earth-made, synthetic moon dirt. With one-sixth of the Earth’s gravity on the moon, he thinks Peak could be easier to build than the pyramids of Egypt.

“When people stop discerning the boundaries between what’s possible and what’s not, that’s when the journey begins.” (Jorge Manes Rubio)