I’m sitting in a quiet corner in Claude Monet’s garden in Giverny. Weeping willows hang down and frame the water-lily pond where a young man stands in a flat-bottomed skiff and silently nets fallen leaves from the surface. In the distance tourists move along floral paths or stop to take each other’s pictures on the Japanese bridge. It’s one of those overcast but brilliant mornings where everything is lit as if in a studio interior. The abundance of the garden and the complexity of the scene are almost overwhelming. The sparkling dew-fall and the fresh breeze combine to shimmer all the elements as if the Creator Himself was working with an impressionist hand.

Claude Monet’s life could be characterized by shimmer, toil, ego, love, river, home, garden, family, press, dealers, challenge, experimentation, effects and series. Here in this living treasure-garden you can feel the presence and revel in the legacy.

During his creative life Monet moved progressively down the Seine and away from Paris: Argenteuil, Verteuil, Giverny. When painting sales made it possible (he was in his forties) he purchased this south-sloping property in what was then and is still now a rather nondescript village. With the help of his extended family and six employees he diverted a stream and transformed a swamp into the garden of his dreams. This garden was to become his primary studio. Both Monet and his dealers believed in thematic, explorative one-man shows. Thus we have the haystack, London fog, steam-engine, coastal and poplar series. In a rented apartment in Rouen he painted the cathedral series. In the meantime, close to the family home at the top of the property, he built a remarkably large state-of-the-art studio. It was here, with failing eyesight, that he labored on the giant water-lily series that was to occupy him for the last ten years of his life.

As I sit here, soaking in the spirit, struggling with the difficulties of the subject, I’m feeling how utterly appropriate were his responses to it. I can see him now. He’s over there, near the Japanese bridge, trudging toward home, together with several laughing children who are carrying wet canvasses up to the studio.

PS: “You ask me to send you what I have finished; nothing is finished and you know very well that I can’t really judge what I’ve done until I look it over again at home and I always need a short break before I can put on the final touches. The bad weather here gives me difficulty to find the effects again in my motifs, so I’ll have a lot to do once I get back to Giverny. (Letter from Claude Monet to his dealer Paul Durand-Ruel, 1886)

Esoterica: Claude Monet (1840-1926) didn’t think of his paintings as holding lofty ideals. He sought only to achieve the effects that interested him. “I have always had a horror of theories; my only virtue is to have painted directly in front of nature, while trying to depict the impression made on me by the most fleeting effects.” (Monet)

The following are selected correspondence related to the above and other letters. Thanks for writing.

I was painting a small watercolor at Giverny just across the pond from the foliage-draped bridge on October 2nd. Sat on that little damp bit of concrete and muddy ground where the water ran out of the pond. I had a group of 10 painters with me who were all sightseeing. As this was my third visit to Giverney, I was “hot to paint.” Knowing one can’t just set up and block a path, I had only a 9 x 12 block and my small metal box of half pans and 1 and 1/2 hours. I did the w/c sketch from that location and then plopped myself down on a concrete “stump” at the end of the nasturtium path looking toward the house for a second “quickie.” Thought I had died and gone to heaven. I just wanted to stroke the ground to absorb Monet’s genius. Isn’t it a marvelous thing to be in the presence of great art — Monet’s paintings and his garden made my heart almost burst with happiness. Aren’t we so fortunate to be artists? 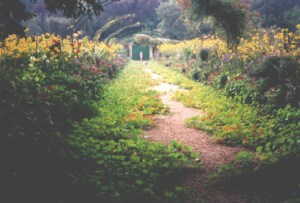 (RG note) Sheila mentions the nasturtium path. It’s in the middle of the garden directly below the house. Imagine a wide sandstone walkway with trellises overhead. Nasturtiums crawl out in profusion toward the center of the path. The combination of the particular emerald green and the almost equal intensity orange of the flowers simply blows up your head.

I too have sat in that quiet space in that garden and sketched the lily pond in between the queue of others strolling down the path. Some gawked at me, some just try to peek at what I am sketching, some perhaps out of respect avert their gaze. Reading your email put me back there and opened up my need to work further on that sketch now because it was never finished and somehow, in some small way I want to go back and be in that place where I can struggle with this again and feel the goodness of that struggle.

I too, have been in your shoes the previous two Mondays in September. I was at Art Study Giverny Sept 13-16, 2002 and I was there Sept 1-18, 2001. I was stranded last year when I was to return home Sept 12. I can’t think of a better place to be stranded. I painted 42 paintings last year, and 20 this year. This year I was assistant to Gale Bennett and had the time of my life with the French culture. I love France and think that the Creator must have had Giverny in mind when the Garden of Eden was made. I have watched the gardener clean the pond, smelled the earthy smells of the pond and the perfumes of the garden. 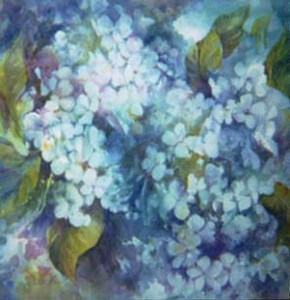 Today I will hang a show of works inspired by Monet and created by members of an Internet artists community (an email list) so it seemed serendipitous to read your letter from Monet’s garden. After one of the members visited that “non-descript” village and then posted her photos for others to see or to paint, we discussed how artists create their own environments to use as inspiration or subject. Email conversations being what they are, we were soon discussing having a show of works of both Monet’s garden and our own — not a virtual show on the web, but a real show in a bricks and mortar building.

(RG note) “Real Gardens/Virtual Friends” is another example of where artists who meet on the net get together in the real world. This show is in Georgia, USA with paintings from artists in 28 different locations. Some ofthese virtual friends will meet face to face for the opening weekend to paint together and share conversations about art, ideas and life as an artist. More about the show at www.PaintL.org

I do 17 spontaneous oil pastels every day. I work fast and furious; what wants to come out, comes out. Last fall I was ready to trash my art and I went through this little black hole and I came out the other side with a box of pastels. I call my oil pastels “Art from the heart!” Because of the speed I do these, there is no way I can plan and execute these images, I just let them pour out. I spend about 5 minutes on each image or until the title pop into my head and then I know it is finished. Such fun and such an energy charge.

I too have a resistance to theories. My art is responsive, coming viscerally, not from mind or intellect. I started painting when I was fifteen. When I was 26, I was quite intellectual and found that I was trying to translate ideas into pictures. I produced “Quill,” an image of a poet consumed by his own words. I was thinking of the comment the writer makes in Ibsen’s “The Seagull.” The young woman has just told her she is in love with him, and he responds that while she is making this declaration he is taking notes in his head so he can put it into his writing. He is not present, but only sees through his writing. I became stuck at this time in my life, because I thought I had no visual imagination, and I took to writing poetry. Then I became a professional actress and did not paint again until I was fifty. At that time, I rejected any pre-conceived ideas about what painting should be, whether or not it should have a message, be part of a series, make social comment, etc. I began to respond to what I saw and how I felt it. Now I just paint what comes into my mind’s eye, and it is a delight. 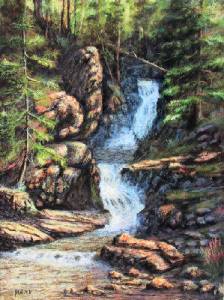 painting by Murray A. Roed

I am working on a series of paintings about geologic landmarks that I hope to publish in a coffee table type book some day. I would like to do an example package and send it out to some publishers. I now have a bunch of new computer hardware and software and know I have that capability, but I am unable to execute. Should I just quit moaning and take a class? 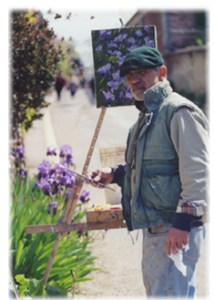 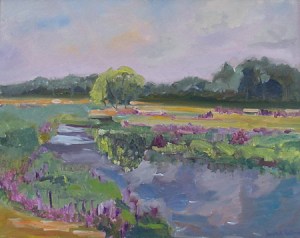 That includes Diane, who writes, “It has been my dream for many years to go to Monet’s garden. I am inspired now to make reservations for France!”

And also Alex Nodopaka who writes, “I am sure the gardens have overgrown, but your story, though wilted, is still charming.