You are at:Home»Uncategorized»A Day in the Life of a Thai Monk
By ShawnA August 6, 2001 Uncategorized

The temple bells ring at four a.m. The temple dogs start howling. My friend Jibba jumps from his thin mattress as he has done every morning of his adulthood. He finds his robe somewhere in the dark and goes into to the kuti washroom. There’s movement in the dark all over this dormitory. Nobody turns on any lights. In less than five minutes he’s meditating in half-lotus in the viharn with his brother monks. This place has candles. Jibba is a small man with a wide, agreeable face, a head that is wider than it is deep — more of a bas relief than a bust, shaven like a shining nut — even his eyebrows are shaven. Everyone is very still. 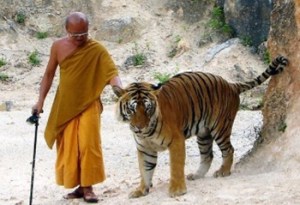 A monk at Tiger Temple, Thailand,
taking the pet out for a walk

Another bell rings at five. This is the traditional hour when “the light shows the lines on the palms of the hands.” It’s the beginning of the active day. Jibba rises from meditation, gathers his alms bowl, bows to the abbot, and exits the wat. Carrying a plastic sack with some Thai advertising on it, he walks out into the back streets of this cock-crowing town. Women emerge from their doorways and gateways in the half darkness with the merit-making offerings of food, which are to sustain the monks for the day. Most of these early risers are familiar to Jibba — Mrs Vorharwan, Mrs Wundoiukotwandat, Mrs Prasing Vatabothotgad. All give wai and gifts — which he acknowledges with a smile and a bow. Sometimes he will say a word or two — the monsoon, somebody’s health, the king’s birthday. By seven-thirty Jibba has all the food he can use — and enough for some others, including me. He continues his walk as if he is now on exercises. He passes along the edge of the river and through several small villages. These places are already lively with people going about their business. School children fly by. He greets some acquaintances and hurries on his way as if he has something better to do. After a while he traces his steps back to his viharn.

Once inside Jibba checks the blackboard and sees that there will be three funerals today. He notes that it’s his turn to chant. This information is posted for all the monks. None of the deceased are known to him, and none are young. “This is good,” Jibba tells me. It suggests to him that perhaps the AIDS epidemic is letting up. Jibba moves to a sunshiny corner of the wat. He gives me some rice in a woven bamboo bucket. He dines silently and privately. He takes a supply of food and leaves it at the door of a building he calls the “noviciary.” There is still more left for both of us in these small buckets. Back in the sunny spot he opens a book. He tells me he reads books in English and French, as well as Thai. The book he’s reading right now is called “The Perfect Heresy” by Michael O’Shea. He says he likes reading about Western religions. This one is about the heretic Cathars in France during the 10th to 13th Century and their struggle with the Inquisition. “It’s a best-seller,” he says, quietly. After he has read for a while he gets up and takes a beautiful hand-made broom from a closet. For a while he sweeps and cleans an area of the grounds. Other monks are doing the same things in other areas. He picks up small papers and puts them into a cardboard box. “Recycling,” he says to me as he passes by to take the box somewhere. The sun is now well up in the sky and everything is dry, hot, dusty; he stirs dust. Then he makes the rounds of the wat with a container of milk, which he pours into the bowls of the temple cats. Toward noon he announces that we can eat again. This time he eats in a more leisurely manner. He has a watch on his wrist and he checks it several times to see that he’s finished and his things are put away by noon. This is the custom. He’ll not eat again today. He takes my bucket. I’m looking at the terra-cotta and ceramic tiles on a massive and grotesque statue that stands in the wat. “Thai artists are content with custom and history,” he says. “Western artists are free; you are not inclined to apprentice. Both of these approaches are good.”

Jibba enters the viharn and takes his place at the seating along the side — two seats from the front. Mourners are wandering in — standing around — some are kneeling toward the golden Buddha or applying little slips of gold leaf onto a small brass Buddha. A few are wiping their eyes with handkerchiefs. Undertakers — crude and rough-looking men in undershirts — are standing in the doorway, smoking. In the adjoining open-air mortuary they have plugged tubes into the deceased, bled them into miscellaneous plastic bottles, pumped in embalming fluid, and cleaned and re-dressed the cadavers. They unceremoniously bring the dead in their turn into the viharn under a golden silk cover. Bare wrists and hands, sticking out in rigor mortis, and white stockinged feet are all of the dead that are seen.

Jibba holds onto his fan. It appears that a monk’s fan is not only for keeping cool — it’s used also as a screen to help him concentrate on his meditation or his chant. The fan’s handle is cut to the sitting height of each individual monk. I think Jibba does not see the things he does not want to see. There is a large TV screen in the house directly out the window on the other side of the viharn. I can see that Jibba is avoiding looking at the screen.

The bell behind the crematorium starts ringing. Dogs bark. A sweet odor of burning sandalwood and teak fills the air. The first of the deceased is being burned. Out the door a group of people are sitting on metal chairs. Taxis and pedi-cabs bring people in and out of the wat and up to the crematorium. Motorcycles noisily circle. Jibba holds his fan close to his face and raises his voice: (Later he gave me a pamphlet with an English translation)

Death is inevitable for whatever is born. Like a murderer with a poised sword, death waits from the moment of birth.

Death is the final ruining of life’s success. All health ends in sickness, all youth ends in aging, all life ends in death.

Death comes to the worms, which have shared our body, the bacteria, which are born, grow old, and die with the body.

Death is reflective of the frailty of life.

Death is unpredictable; it can come at any time.

Death limits what is the short extent of human life.

Some people leave. Others come in. He recites the lines of another text, the Visuddhi Magga:

“The nights and days keep slipping by
As life keeps dwindling steadily
Till mortal’s span, like water pools
In failing rills, is all used up.”

“The dewdrop on the blade of grass
Vanishes when the sun comes up;
Such is a human span of life.”

“As though huge mountains made of rock
So vast they reached up to the sky
Were to advance from every side,
Grinding beneath them all that lives,
So age and death roll over all,
Warriors, monks, merchants and craftsmen,
The outcasts and the scavengers,
Crushing all beings, sparing none…
No strategy, no riches serve to beat them off.”

Jibba stays in the viharn repeating these things for the mourners who come and go. He does not look at the mourners. Sometimes the mourners leave small money-envelopes beside him. This is for the continued restoration of the wat. Several times, when not much is going on, he wanders out of the viharn as if he is going to have a cigarette. He takes a small piece of cardboard from an inside pocket of his robe. He seats himself in the sun and bends very close to the cardboard and draws with a fine felt tip marker. It’s a complex intertwining of Thai design — something like the embellishments in the Book of Kells. “It’s my hobby,” he says.

It is now evening. Jibba appears tired. Sometimes I think he is asleep in lotus position. At ten the bell rings again, the dogs bark, and the last mourners wander out of the wat. The gates are closed. The smoke from the crematorium hangs in the wat like a night-fog. Jibba moves outside and looks up at the stars. He breathes the night air. He bows slightly or gives wei to other monks who pass by. “You like my day?” he asks. “I do,” I say. Two or three cats follow him as he goes to his room. He gives me some pamphlets. He marks the translations with a red felt-tip marker. “Good night,” he says. As I leave I hear him repeating: