You are at:Home»Letters»Of geese and swans
By clearmarble September 13, 2002 Letters

Horace Walpole once remarked of Sir Joshua Reynolds: “All his own geese are swans, as the swans of others are geese.” I’ve heard variations of this idea from some of my artist friends. There have even been times, perish the thought, when I’ve caught myself being like that. In most cases it’s got something to do with the ongoing problem that we ourselves just never seem to have enough swans. Sometimes there’s nothing but ducks.

The trick to getting more swans is to see your own geese for what they are. It takes clarity of vision. It’s a function of looking and seeing. The patron saint of mediocrity awaits with his veil in every studio. The seasoned eye is better able to spot his movements. When the mind is elevated and informed it stands a chance of avoiding his spell. Trouble is, the guy has to be re-fought every time you crack out a new canvas or full-sheet. Good news: He can often be held at bay by potent antidotes:

Stop, look and listen.
Take pains to take pains.
Aim for the above and beyond.
Keep your betters for counsel.
Give yourself a rest or a run.
Constantly ask: “What could be?”
Lash out at all forms of laziness.
Believe in yourself, but not too much.
When all else fails: follow directions.
Go back to school — if only for a minute.
Put “process” beyond other considerations.
Know that “good enough” is not good enough.
Before you start out, get your swans in a row.

If the best of your vision eludes you, and your dreams can’t be grasped today, be philosophic, know that defeat is often temporary. Never let disappointment spoil the hunt. Tomorrow will be another day.

Esoterica: Every professional was once an amateur. Ongoing professionalism is based on an apprentice attitude. In the range of creative aspiration, more is attainable when the artist has a student mind. A wide-eyed student stands a better chance of flying with the swans.

Make a swan from an ugly duck
by Nicole Best Rudderham

Thinking about whether I am honest with myself about my finished pieces, I realize I am actually not! I might know perfectly well that a piece may look good, but yet, I know there is a ‘little thing’ that bothers me, as the artist. My maturity in my art teaches me to be honest with myself and correct it before it is hung. On a few occasions I fight with the notion that I could just leave it, but I walk into my next show, and there is that ‘little thing’ screaming out at me from the corner of the gallery. No one is the wiser, yet there I am wandering around all evening horrified I did not add ‘that stroke of color’ or ‘change of angle’! Wouldn’t it be a novelty for the guests at an opening, to witness an artist, flinging down a painting to add one last stroke! Reality is — I really want to, but don’t. It’s too late. Or is it? Question: Is it “Kosher” to change a painting — after it’s been shown in a gallery and photographed for the artist’s portfolio; to re-photograph and hang it at future exhibitions? Is this “tacky or an acceptable improvement?” I haven’t done it as yet — but am considering it seriously.

The putting down of others is one of the defense mechanisms that artists use in order to protect their fragile fortresses. It is understood by many as just that. Artists with a great deal of success, and those whose egos are not so directly connected to their work have less trouble with the empowerment of others. “Life is too short to be small.”

One can be too cerebral. Don’t think too much. Let go and allow the unknown, have a part in creativity. Muse, muse, and muse. Do some yoga or other activity before working. Read a poem, then let it go. Listen to the silent voice of your work. Continuity can keep the flow and one work leads to the next. Evaluate later, judging too quickly may preclude original works because we don’t yet know how to relate to them. Stay open.

There is altogether too much emphasis these days on simply going in there and splashing paint around. The idea of finding the artist within has its limitations. While there is nothing wrong with free expression, there are some aspects of art that require concentration and care. There will be lots of opportunity to make it look easy later. “Great things are not done by impulse, but by a series of small things brought together.” (Vincent Van Gogh)

Place of surrender
by Suzanne Northcott 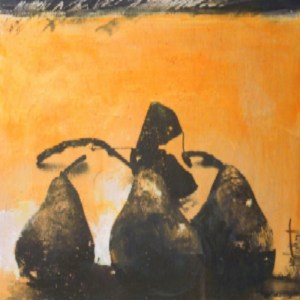 My painting process arises from a sense of faith in the source, the cultivating of receptivity and the entering of a place of surrender. I am also drawn to words and imagery as links between the material and subconscious world. I am always listening to these impulses and have the same sense of faith in their variety as part of the process. These thought are often the genesis of my paintings. When I stand in front of a new work I often have only a general idea of where it is going. Once I begin working I want to be in that place of surrender, led by the process, trusting that the imagery is wound into the same source.

One door closes, another opens
by Ron Ukrainetz, Montana, USA 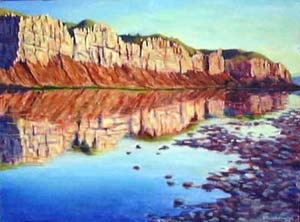 When I began this career about 30 years ago I was working in a media that was primarily used for illustration. As I submitted for shows and exhibits, the rejection letters grew. For some unknown reason, I saved them. At least they took the time to respond. After a period of time, these rejection letters began to take their toll. My father said: “Take all those rejection letters and tack them on the wall of your bathroom. You’ll see them every day at least three times. In no time at all, you’ll recognize them as nothing more than what they are: ink on paper.” It worked. I began to analyze them. I began to realize that these letters were mere words, written by mere mortals with their own flaws. My skin thickened. Where one door is closed, another will open. It is the drive that we, as creative people, must have. If we can’t open any doors, then someone has indeed rented space in our head and someone else has taken control of our lives.

Choosing where my work belongs
by Veronika Funk, Alberta, Canada 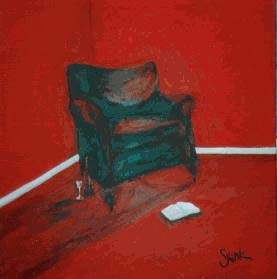 I find that whenever I follow my heart and continue to do what I feel is right for me, people respond. Even if the galleries don’t accept my work right away, if I keep at it, eventually the right ones do (the places that actually sell a lot of my work). I received the best bit of advice from the previous director of the Glenbow Museum in Calgary, Alberta, Canada, and am finally at the point where I’m choosing where my work belongs, instead of feeling at the mercy of galleries and jurors. I believe in fate and destiny (very spiritual) and know that there is always a good reason for the rejections, as much as the acceptances. In an area where landscapes are prevalent, my interiors are quite different but are attracting quite a bit of attention. Though I’ve tried everything else (and still play) I find my greatest reward comes from doing what is important to me.

Why am I painting?
by Lillian Goodman

Even though everyone who sees my paintings says they are great, no one buys them! So I ask myself, “Why am I painting!” and try and convince myself I do it for me… because I can’t stop!

New facility taking art away from community
by Jacqueline Sullivan

Over the past 5 years, our town has turned its Art Center into a wonderful architecturally designed building. They fired the old director because he wasn’t being aggressive enough in getting funding for the new facility. So now we have a new director and a beautiful new facility. The result is: The gallery area is now only rarely available to local groups. When it is available we have to pay $500 plus 30% commission for 3 weeks. We used to pay $100 plus 20% for three weeks. The classes have more than doubled in cost and the teachers have not had a raise. There is a huge staff but when you call all you get is voice mail. The expensive classes are poorly run. In a recent printmaking class, the supply cabinet was locked for 3 of the 6 weeks because no one could find the key. I’m sure that many of these problems are due to the management. In this case, the growth and construction of a beautiful facility has worked more towards taking art away from the local community than enhancing it.

That includes Susan Burns who wrote, “People began creating art at the same time we started religion. We have a need to get deep into our spirit, or soul, whether that spirit is ‘good’ or ‘bad.'”

And also Judith Dodington who says, “Unfortunately it’s the goose painters who are making all the money.”

And Richard Nelson of Maui, Hawaii who says, “And this one’s no turkey.”

And also Donna Bowers who says, “Failing all else, take a long walk, breathe deeply, and fix a Margarita.”