She was speaking quietly to herself as I parked my car in the early afternoon of March 11th, 1985, in Vancouver, British Columbia, Canada.

I took my tape recorder and fell into step close behind her. For awhile she said nothing, then she turned partly toward me and said, “Accept the Gift!”

She was about 60, small, rather sinewy and sallow and without makeup. Her hat was blue and fresh-looking. She wore a long cotton dress, maroon, with a flowered design, and a black cloth jacket. On the front of her jacket there were several badges which I have illustrated from memory. I have also illustrated an obos, of which she speaks, because it may not be familiar to everyone.

I followed her for 35 minutes. She spoke kindly and softly, often in a patient, explanatory tone. Her statements were spaced, confident and informed as if well rehearsed. At times, unexpected words were emphasized in the style of some preachers. Some statements were very quiet—almost inaudible. She chose not to notice me, and despite the friendliness of the words there was no eye contact. Her occasional smile was not for me.

We proceeded north, from the 900 block Richards Street until reaching Hastings Street, where she turned left and left again onto Seymour Street proceeding south. At Helmcken Street she crossed over to the other side. She stopped speaking just before Davie Street, where she turned right. I followed her for a minute or so, then returned to my car. I never saw her again.

I’ve edited only slightly to improve the grammar. I don’t think the meaning was tampered with or adjusted in any way. Where statements were very quiet I have placed brackets around what I thought I heard. Completely unclear statements due to traffic or mumbling have been left out; these are shown with an asterisk. The numbering of the items was my idea. I played the tape several times and took care copying it out. The material was recorded on a UHER CR 240 with a hand-held microphone. The tape was later recorded over by one of my children.

The general quality and nobility of the material impresses me as do many of the individual items. There is a curious, poetic thoughtfulness, which on re-reading, is often haunting. There are peculiar specifics and evident prejudices. What I overheard was at once erudite and naïve, original and derivative, clear and mysterious.

I was impressed with the place she describes. It’s curious to me that while this woman seemed sure of what the place could be, she herself did not seem to be of that place. This bothered me then and it still does.

On pathways or highways, particularly during chance encounters with others, certain of these items come back to my consciousness. 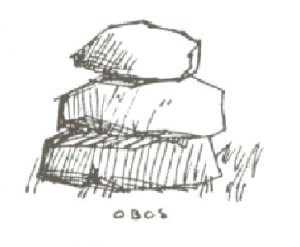