You are at:Home»Letters»Triple-think
By ShawnA October 13, 2015 Letters

After a one-person show a kind of post-partum psychosis sets in, which generally lasts for a day or so, then, for some reason, there’s a need to go back to work. Looking for the secret at the easel, I remembered: “It’s a matter of thinking one thing while you’re thinking of other things.” A modest understanding, but it’s useful. Often we merely push on — leaving the work to evolve in the hands of the gods — very much as a potter surrenders his clay to the “Kiln God.” Sure, there’s a place for intuition and just letting flow — but there’s also a need to bring in all of the strategy we can muster. I call it triple-think. Here are some examples: 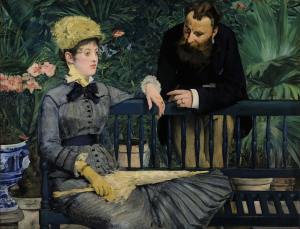 In the Conservatory
oil painting, 1878, by Edouard Manet

Keep the subject in focus while dealing with mother-colour, overall composition, or happenstance.

Render the design while being aware of opportunities for condition — weather, light, or feelings.

Get the figure anatomically correct while watching for possible elements of psychological depth or obscure or secondary meanings.

Work on ideas and emotions while keeping in mind stylistic tendencies and the potential of end-play.

Accept complexity and layering while taking pains to make it look deceptively simple. 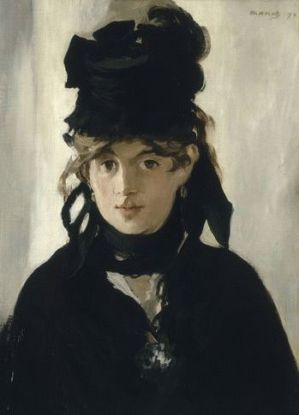 Berthe Morisot With a Bouquet of Violets
oil painting, 1872, by Edouard Manet

Each artist’s uniqueness and individualism brings endless variations. This dynamism invites the “Keeping-in-Mind-God” to play a part in the work’s evolution, enriching the process. The job becomes an intellectual as well as a technical and emotional exercise. The idea is to stretch your brain so your act of art is your very own.

PS: “All you need to do to receive guidance is to ask for it and then listen.” (Sanaya Roman)

Esoterica: Begin at the beginning. Open the gates to downstream possibilities. Go with the flow and pay attention to fortuitous tributaries. “The great majority of men are bundles of beginnings.” (Ralph Waldo Emerson)

This letter was originally published as “Triple think” on March 23, 2001.