You are at:Home»Letters»Universal artist
By ShawnA January 5, 2016 Letters

I’m laptopping you today from Goethe’s chair. I’m in his “poetry room” here in his family home in Frankfurt. The five-story building, leaning out over a street called Grosser Hirschgraben, was restored after WW2. The surrounding buildings are now a museum and one of the main attractions in this city. Here are manuscripts, drawings, paintings, childhood toys — a furnished interior locked into 1749. There’s a library, picture gallery, theatre and conference center. On the third floor I bumped into a shaggy young poet, his eyes on the ceiling, notebook and stubby pencil in hand. In the library I watched Japanese schoolgirls copying his drawings and giggling at his poetry. 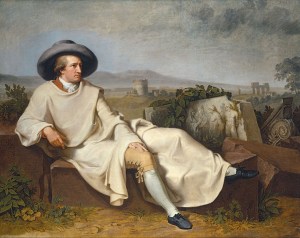 Goethe, as you might have guessed, is one of my favourite guys. He is, of course, a universal hero — celebrated in books, festivals, plays, conferences and websites. The artist has superceded himself. This in part because he loved connectivity and understood the viral nature of culture. He cultivated the bright and the influential. He travelled in search of love and beauty — seeking to understand and unveil. He enjoyed writing letters, honing sentences, turning phrases. His life and his life’s work became the kernel of an institution. Like Picasso, Vasarelli, Klee, Wordsworth, Shakespeare and other creators he is now anchored by a piece of real estate. Everyone owns him.

Today, in the surrounding countryside, the Riesling grapes are off the vine and well-dressed strollers pause to take the sun-filled views. Apart from the distant roar of traffic on the autobahn, things are pretty much as they were. Everything, everyone is attractive. Beauty, decency and pleasantness prevail. Children fill the air with laughter. Travellers pose. Lovers kiss. The world is in the business of finding its artists.

“The Essential Goethe” – a collection of writings by Johann Wolfgang von Goethe, edited by Matthew Bell

PS: “When mortals wander far from home, / Beauty’s web may catch them as they roam.” (Goethe)

Esoterica: According to a recent survey by the Organization for Economic Co-operation and Development, Germany tops the nations with 84.7 websites per 1000 people. Denmark and Norway follow with 71.7 and 66.4, while the US, UK, and Canada all hang out pretty close to 60. If he could have, Johann Wolfgang von Goethe would have been online. He is now.

This letter was originally published as “Universal artist” on October 31, 2003.